A 29-year-old woman, gravida 1 para 1, comes to the physician’s office due to fever and left breast pain for the past two days. The patient is 2 weeks postpartum after an uncomplicated pregnancy and vaginal delivery. She had been breastfeeding every 2-3 hours until 2 days ago, when she noticed sharp pain and redness on the left breast. Since then, she has stopped breastfeeding because of worsening pain, and she recently developed a fever and chills. She has no allergies, and her only medication is multivitamins. Temperature is 38.3°C (100.9°F), pulse is 92/min, and blood pressure is 125/85 mmHg. On physical examination, there is a swollen, firm, red, and tender area on the left breast without fluctuation. Tender, swollen lymph nodes are noted in the left axilla. The right breast appears normal, and the rest of the physical examination is within normal limits. Which of the following is the most appropriate response by the doctor? 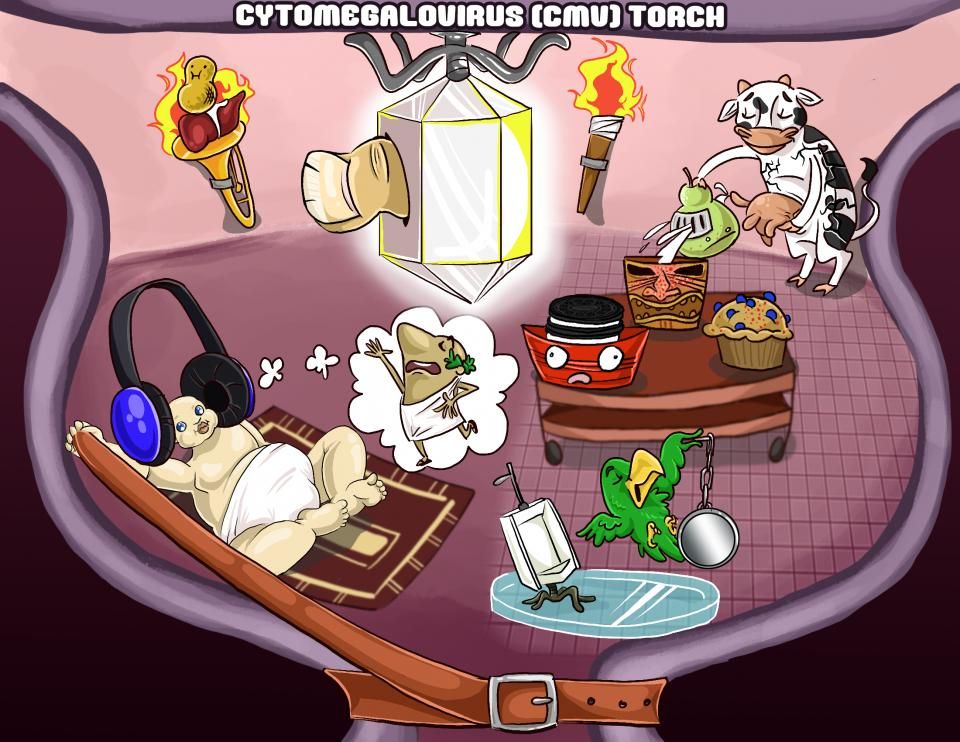 Perinatal infections are a significant cause of impaired growth, developmental anomalies, and mortality. They can be divided into two categories.

The first category is in-utero infections acquired transplacentally or through ruptured membranes, which lead to congenital defects. They are mostly represented by TORCH infections, an acronym that includes infections caused by Toxoplasma, Other agents - usually syphilis; Rubella; Cytomegalovirus, and Herpes simplex virus.

The second category belongs to intrapartum infections, which are acquired as the newborn passes through the birth canal, mostly caused by group B streptococcus, Hepatitis B virus, and HIV.

Let’s begin with TORCH infections. In some cases, intrauterine infection may be suspected on the basis of laboratory results obtained during pregnancy, like positive syphilis serology with increasing titers, and on ultrasonography findings.

First, congenital toxoplasmosis is caused by the protozoan parasite Toxoplasma gondii. Prenatal diagnosis is based on ultrasonography signs of congenital infection, like ventriculomegaly, intracranial calcifications, and fetal growth restriction. It is then confirmed by polymerase chain reaction or PCR testing of the amniotic fluid.

Ok so congenital infection is confirmed by positive IgG alongside positive IgM and IgA.

If the individual has clinical findings suggestive of congenital infection, positive IgG but negative IgM and IgA, they are presumed to be infected. This is because there might be a delay in IgM and IgA production. Repeat testing can help exclude congenital toxoplasmosis if, in the absence of treatment, it shows a decline in IgG titer and negative Toxoplasma-specific IgM or IgA after one year of life.

Next, if data is inconclusive but there are clinical signs of congenital toxoplasmosis; a positive maternal history of infection; or if lab results came back positive, lumbar puncture is needed to obtain cerebrospinal fluid for Toxoplasma PCR, protein, glucose, and cell count.

If PCR is positive, it confirms the diagnosis. Laboratory analysis of the cerebrospinal fluid might show elevated protein above 1 gram per decilitre or mononuclear pleocytosis.

Ok, after that, brain CT is performed to look for focal brain lesions or hydrocephalus, which is characterized by an accumulation of cerebrospinal fluid within the brain.

Other findings may include intracranial calcifications and cortical atrophy.

An ophthalmological examination is also needed to look for chorioretinitis which is the inflammation of the choroid and retina of the eye as that might be the only sign of infection in newborns. I

f chorioretinitis, hydrocephalus, and intracranial calcifications were detected, this is highly suggestive of congenital toxoplasmosis.

And finally, all newborns with suspected congenital toxoplasmosis should undergo hearing evaluation since it can lead to hearing loss.

Prenatal management consists of spiramycin therapy in those under 18 weeks of gestation to prevent maternal transmission. Pyrimethamine and sulfonamides can be used later in gestation to treat the infected fetus.

Newborn management consists of a regime of three antiparasitic drugs. First, pyrimethamine is given in doses of 2 milligrams per kilogram orally once a day for 2 days, which is then reduced to 1 milligram per kilogram for six months. After six months, therapy is continued for another six months with a dose of 1 milligram per kilogram three times a week. Leucovorin is usually administered in doses of 10 milligrams 3 times a week for one year and a week, and sulfadiazine is given in doses 50 milligrams per kilogram twice a day just for one year. Glucocorticoids like prednisone 0.5 milligrams twice per day are added if cerebrospinal fluid protein is above 1 gram per decilitre or when chorioretinitis causes vision problems.

Next, congenital syphilis is caused by the spirochete Treponema pallidum.

Prenatal diagnosis is based on ultrasonography findings and on the same tests as in postnatal diagnosis but using umbilical cord samples. After birth, evaluation begins with a complete physical examination.

More specific early signs might include a large, thick, and pale placenta; generalized, nontender lymphadenopathy; bone deformities; and rhinitis. A maculopapular rash consisting of small, red or pink spots also might appear one to two weeks after rhinitis. The rash progresses over one to three weeks, and it is followed by desquamation and crusting. If present at birth, it may be widely disseminated and bullous. The umbilical cord might edematous and resemble a "barber's pole" with spiral stripes of red and light blue alternating with white discoloration. Long-bone abnormalities associated with pathologic fractures or pain giving the appearance of paralysis might be present as well.

Regarding late signs, they can develop anywhere, including the face - represented by frontal bossing where the forehead is really prominent, saddle nose, or short maxilla; the eyes, where syphilis manifests as interstitial keratitis, secondary glaucoma, and corneal scarring; the ears, where it leads to hearing loss; oropharynx – presenting as the Hutchinson triad, which is virtually pathognomonic for congenital syphilis.

The triad consists of Hutchinson teeth which are small, notched, widely spaced permanent teeth; mulberry molars, described as molars with small cusps and enamel nodules; and of perforation of the hard palate.

Next, diagnosis can be confirmed by detecting spirochetes on darkfield microscopy or by PCR using samples from any mucosal lesion newborn or the placenta might present. If positive, diagnosis can be made. Now, if negative, serologic tests are needed.

First, nontreponemal tests like Rapid Plasma Reagin or RPR, which are based on the reactivity of the infected serum to a cardiolipin-cholesterol-lecithin antigen, can be ordered. If any nontreponemal serum test shows an antibody titer 4 times higher than the maternal titer value, alongside any typical symptom of congenital syphilis, infection is highly probable. If the titers are normal or lower but the individuals has typical clinical manifestations, syphilis is considered unlikely. In neonates with no signs of illness and low or negative serologic titers, syphilis is considered possible.

Next, those with clinical signs of congenital syphilis or born of infected mothers who received inadequate or no treatment should undergo subsequent testing, including long bone radiographic examination and lumbar puncture for cell count, protein, and non-treponemal tests.

The prenatal diagnosis is based on specific findings on ultrasonography and positive rubella-specific IgM testing. After birth, evaluation begins with a clinical exam.

Congenital rubella syndrome can be "confirmed," "infection only," or "probable," depending upon clinical findings and laboratory findings.

Evaluation begins with serologic tests. A high level of rubella-specific IgM antibody in those under six months of age or IgG in those between 6 and 12 months of age which persists for a longer time than expected from passive transfer of maternal antibody confirms diagnosis.

Next, viral detection using viral isolation from cultures based on nasopharyngeal secretions or PCR can be used instead of or together with serologic tests to confirm the diagnosis.

Other tests include a complete blood count with differential, lumbar puncture and cerebrospinal fluid analysis, and x-ray examination for bone anomalies.

Those with symptoms consistent with CRS and negative serologic testing or viral detection, CRS is probable.

Treatment is mostly symptomatic. This means prevention is vital. Those who are planning on becoming pregnant should be vaccinated at least 28 days beforehand because the vaccine is a live virus.

Cataracts and other severe eye problems are not found typical in congenital cytomegalovirus infection; if these are present, they strongly suggest another cause.

Next, laboratory diagnosis begins with PCR or viral isolation from cultures using urine samples collected within the first three weeks of life. If these come back positive, diagnosis can be confirmed. If inconclusive, repeat viral culture or PCR testing is required. If positive and the infant is under three weeks of age, diagnosis can be made. Alternatively, if the results are positive in a symptomatic infant older than three weeks, this suggests but does not confirm congenital cytomegalovirus infection because of the possibility of postnatal infection. The only way to confirm it is retrospectively by PCR analysis of dried blood samples or the so-called Guthrie cards obtained for newborn screening. If PCR comes back negative, the infection was acquired after birth.

Other lab tests are ordered to assess the extent of the infection. These include a liver panel which might show elevated liver transaminases, a full blood count revealing thrombocytopenia and lumbar puncture with cerebrospinal fluid analysis which may reveal elevated protein.

Prenatal diagnosis is based on specific ultrasonography findings and positive viral cultures or PCR.