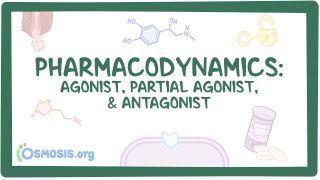 An agonist is a chemical that binds to a receptor and activates the receptor to produce a biological response. Whereas an agonist causes an action, an antagonist blocks the action of the agonist and an inverse agonist causes an action opposite to that of the agonist.
An antagonist is a group of characters, institution, or concept that stands in or represents opposition against which the protagonist(s) must contend. In other words, an antagonist is a person or a group of people who opposes a protagonist.
In pharmacology, partial agonists are drugs that bind to and activate a given receptor, but have only partial efficacy at the receptor relative to a full agonist. They may also be considered ligands which display both agonistic and antagonistic effects — when both a full agonist and partial agonist are present, the partial agonist actually acts as a competitive antagonist, competing with the full agonist for receptor occupancy and producing a net decrease in the receptor activation observed with the full agonist alone. Clinically, partial agonists can be used to activate receptors to give a desired submaximal response when inadequate amounts of the endogenous ligand are present, or they can reduce the overstimulation of receptors when excess amounts of the endogenous ligand are present.
References and External Links

Pharmacodynamics refers to the mechanisms and effects of medications within the body.

Or more simply, it’s what medications do to the body and how they do it.

Alright, so, in order to have an effect, many medications have to reach their target cells and bind to a receptor.

Receptors are specialized proteins found inside the cell or on its membrane. When they bind to a signal molecule called a “ligand”, they can alter their shape or activity, which ultimately results in some change in the cell’s activity or behavior.

You can imagine the ligand as the key that fits into the lock, which is the receptor, causing it to open or activate.

Now, depending on the effect a medication has on its receptor, they are often divided into two major categories: agonists and antagonists.

An agonist is a medication that mimics the action of the signal ligand by binding to and activating a receptor.

On the other hand, an antagonist is a medication that typically binds to a receptor without activating them, but instead, decreases the receptors ability to be activated by other agonist.

Okay, now the maximal effect or response an agonist can produce, abbreviated as Emax, is determined both by the number of receptors bound to the agonist, which depends mainly on the amount of the agonist given, also known as dose, as well as its intrinsic activity, which is the ability of the agonist to fully or partially activate its receptors.

Let’s plot all this into a nice graph to show the relationship between the dose given, on the x axis, (usually on a logarithmic scale), and the response produced, on the y axis.

So full agonists, upon binding to the receptor at high doses, are capable of producing a maximal response of 100% Emax on the y axis.

This represents the point where all available receptors are bound to an agonist.

In contrast, partial agonists, even at very high doses, result in a smaller response, so their Emax will be lower.

For example, a 70% response would shift the curve downwards.

So, a competitive antagonist will bind to the exact location where the ligand is suppose to bind, kind of like putting the wrong key into the keyhole, which prevents the right key from being used.

The inhibition caused by reversible competitive antagonists can be overcome when there are more ligands floating around.

So when it unbinds, it’s more likely for one of the ligands to bind.

So on the graph, reversible competitive antagonists typically shift the curve to the right without affecting Emax, but increase the dose required to achieve 50% of the maximum effect, also known as effective dose ED50.