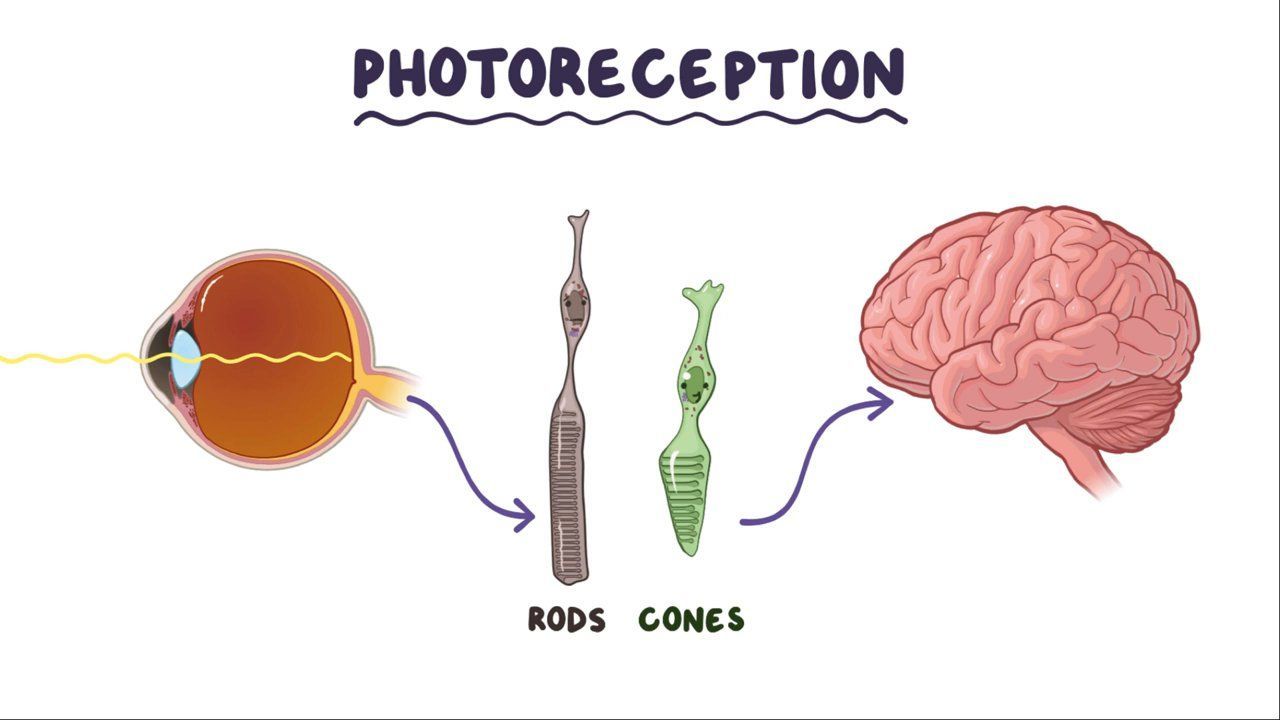 Photoreception involves the transduction of energy into electrical energy.

Photoreception is the process that describes how photoreceptors like rods and cones absorb light waves that enter the eye and convert them into electrical signals which are then sent to the brain for visual processing.

Photoreceptors are located in the retina, which is a light sensitive neural layer of tissue at the back of the eye.

The retina itself is composed of ten of its own distinct layers.

Since the inner limiting membrane and nerve fiber layer are the most anterior portions of the retina, you would think that as light enters the eye it would hit these layers first.

However, light actually travels right past all the retinal layers until it comes into contact with the deepest layer of the retina, the pigmented layer.

So let’s trace the pathway of a visual impulse as it travels from the pigmented layer, all the way through to the nerve fiber layer and eventually to the brain.

The first layer, the pigmented layer is only a single-cell thick and is the layer closest to the choroid, the vascular portion of the eye just posterior to the retina.

The pigmented layer contains epithelial cells which absorb light so it doesn’t scatter within the eye.

Photoreceptors are specialized neurons that detect light and when they hyperpolarize, they send visual impulses in the form of electrical signals to the brain.

The third layer is the outer limiting membrane which sits at the base of the photoreceptor cells and provides mechanical support to the retina, helping it to maintain its structure.

The fourth layer of the retina is called the outer nuclear layer and it’s made up of the cell body and nuclei of the photoreceptor cells.

The axons of these photoreceptors extend into layer five, the outer plexiform layer where they synapse with the dendrites of interneurons like bipolar cells.

Next, is the sixth layer, the inner nuclear layer which is composed of the cell bodies of interneurons, which connect the outer and inner plexiform layer.

The seventh layer is the inner plexiform layer which is where the axons of the interneurons synapse with the dendrites of ganglion cells.

The nerve fiber layer is the ninth layer and is where the axons of these ganglion cells are located.

These axons travel to the posterior center of the retina and exit the eye through the optic disc to form the optic nerve or cranial nerve II.

The optic nerve then carries this visual information to the brain.

The tenth, and last remaining layer of the retina is the inner, or internal limiting membrane, and it simply serves as a membrane separating the rest of the retina from the gel-like vitreous humor the fills the inside of the eyeball.

Now, let’s take a closer look at the photoreceptors which are either rods or cones.

Both rods and cones are modified neurons that hyperpolarize when they absorb light, and send neural impulses that trigger a relay of neurons that deliver that impulse to the brain.

They have an outer segment, which is the portion of the receptor that detects light and an inner segment that contains the cell body.

Thirdly, photoreceptors have a synaptic terminal which connects the photoreceptor to interneurons, like bipolar cells, that help propagate the signal to the optic nerve.

Let’s take a look at rods, which are mostly located in the periphery of the retina.

The outer segment of rods have folds of cell membrane that form disks, like the pleats on a curtain.

These discs have a dense concentration of a transmembrane protein called Rhodopsin which gets activated by light.

Rods have lots of rhodopsin so they’re highly sensitive to light and it only takes a single photon of light to activate a rod.

That’s why rods allow us to see even in dim lighting conditions, like at night.

Rhodopsin doesn’t differentiate between different wavelengths of light, so it only allows for black and white vision.

Next up are cones which are concentrated at the fovea, a small depression in the posterior retina.

Cones make the fovea the area of highest visual acuity.

Like rods, cones also have folds of cell membrane that form disks, but unlike rods which are shaped like a cylinder, the outer segment of these photoreceptors is shaped like an ice cream cone, which explains the name.