A 10-year-old boy is brought to the pediatrician by his parents for worsening headaches that have interfered with his ability to concentrate at school. The patient describes the pain as dull and continuous. The rest of the history is noncontributory. Vitals are within normal limits. Physical examination is unremarkable. Visual testing reveals reduced peripheral vision in both eyes. A head CT is ordered, and the results are as follows:

The mass is surgically resected. Subsequent histology reveals calcifications as well as cysts filled with brownish, cholesterol-rich fluid. The mass is most likely a derivative of which of the following structures? 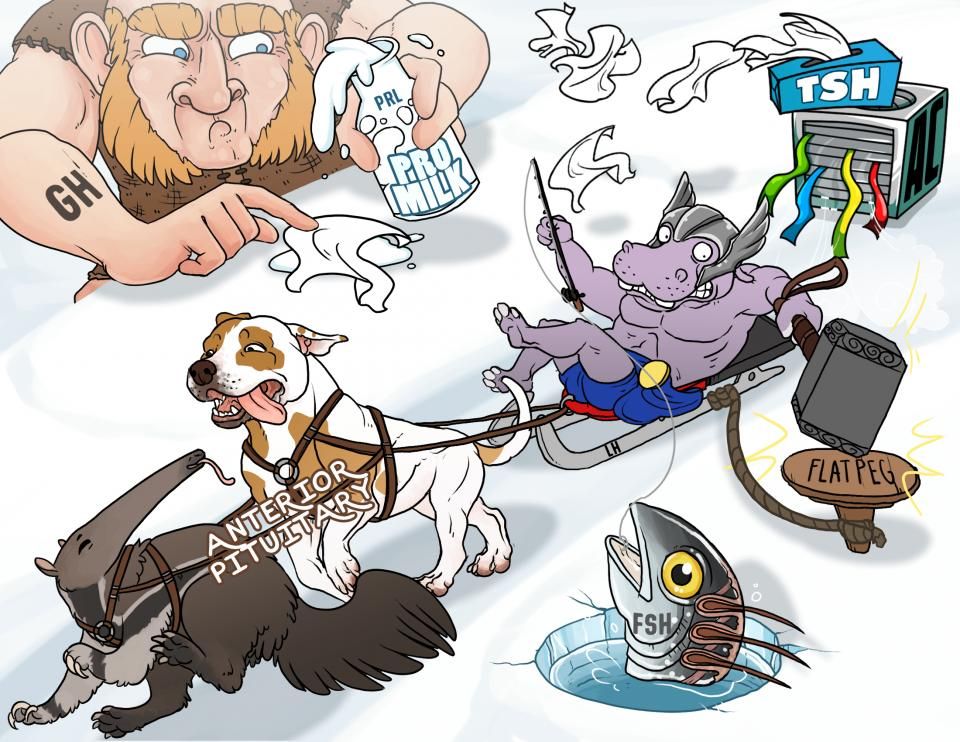 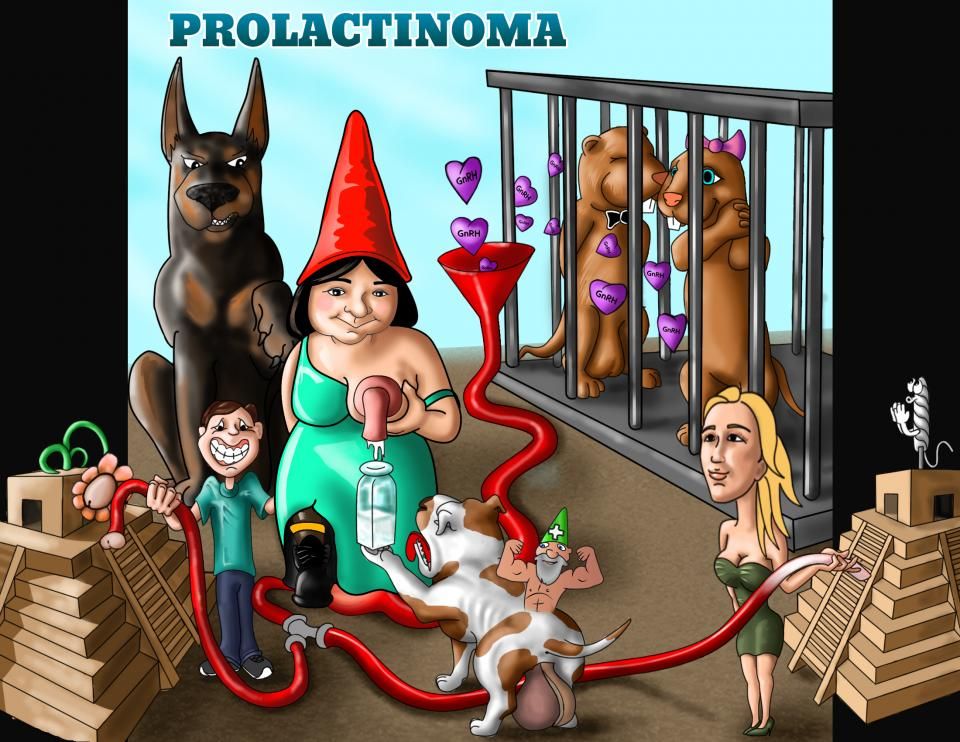 While doing your rounds, you see a 6 year-old named Alex who presents with severe headaches and vision impairment which began six months ago. More specifically, he has some difficulty seeing things on the periphery, what he describes as tunnel vision. Examination reveals bitemporal hemianopia and a much taller stature than expected for his age, with disproportionately long arms and legs. Soon after, you see Maria, who says she has been unsuccessfully trying to have a baby for the last two years. She also mentions that she hasn’t had her menstruation in 3 months, but had milky nipple discharge. Hormone serum measurements were performed in both, showing an increase in insulin-like growth factor-1 levels in Alex and an increase in prolactin levels in Maria.

Now, both seem to have a disease affecting the pituitary. But first, a bit of physiology. The pituitary is a small gland situated in a tiny bony space called the sella turcica. It is linked to the hypothalamus by the pituitary stalk, and it is divided into the anterior pituitary and the posterior pituitary. The posterior pituitary is not glandular; thus it doesn’t make its own hormones. Instead, it stores and secretes oxytocin and antidiuretic hormone which are produced in the hypothalamus. By contrast, the anterior pituitary has five types of hormone producing cells. First, lactotrophs secrete prolactin, which stimulates breast milk production and inhibits ovulation and spermatogenesis. Second, somatotrophs secrete growth hormone, or GH. GH acts directly on target tissues to stimulate growth and development. Then, corticotrophs secrete adrenocorticotropic hormone, or ACTH for short. ACTH makes the adrenal glands secrete cortisol. Cortisol is in charge of the stress response and keeping blood pressure and blood sugar in the normal range. Fourth, thyrotrophs secrete thyroid stimulating hormone, or TSH. TSH makes the thyroid gland release thyroid hormones, T3 and T4. Thyroid hormones speed up the basal metabolic rate in all cells, so it keeps cellular processes going at an optimal rate. And finally, gonadotroph cells secrete luteinizing hormone, or LH, and follicle-stimulating hormone, or FSH, that stimulate ovarian or testicular production of sex cells and sex hormones.

Now, most pituitary tumors are adenomas, which are benign tumors. These tumors could arise spontaneously, but may also be associated with certain disorders like multiple endocrine neoplasia type 1, or MEN1 where tumors also develop in the parathyroid glands and the pancreas. Okay, so when a pituitary adenoma is under one centimeter across, it is called a microadenoma. Because these tumors are small, they rarely cause any symptoms and are usually incidental findings on brain imaging. If the tumor is larger than one centimeter across, it’s called a macroadenoma. As they grow, macroadenomas can press on the normal parts of the pituitary and cause severe headaches and hypopituitarism, which is when one or all of the anterior pituitary hormones are decreased. If the tumor grows superiorly, it can compress the nearby optic chiasm, which is where the optic nerves partially cross. This leads to visual abnormalities like bitemporal hemianopia, or narrowing of the vision field, a very high yield fact to remember! If it extends laterally, it can invade the cavernous sinus, a structure made of venous channels located on both sides of the sella turcica, and press on the nerves that pass through it. This causes cavernous sinus syndrome. The syndrome consists of ophthalmoplegia, which is weakness or paralysis of the muscles involved in eye movement due to compression of CN III, IV, and VI; decreased corneal and maxillary sensations due to compression of CN V; and Horner syndrome due to compression of the sympathetic plexus within the sinus. Remember that Horner syndrome is a combination of miosis, decreased pupil size; ptosis, a drooping eyelid; and anhidrosis or decreased sweating.

Both micro and macroadenomas can be non-functional or functional. Now, most non-functional adenomas grow for a really long time without causing any trouble, until reaching the size of a macroadenoma. Macroadenomas present with compression symptoms, especially headache, bitemporal hemianopia, and double vision. Sometimes, hypopituitarism features, like impaired growth, sexual dysfunction, and intolerance to cold might also develop. Another possible consequence is pituitary apoplexy, occurring when the blood vessels of the adenoma rupture and cause a hemorrhage that compresses the blood vessels of the pituitary itself. Symptoms are similar to those caused by compression like bitemporal hemianopia and severe headaches, but meningeal signs like neck stiffness can also be present. Because blood supply to the pituitary is obstructed, this leads to pituitary ischemia, necrosis, and loss of pituitary function. Non-functional adenomas are usually diagnosed by brain MRI, while pituitary hormone screening might also show a decrease in hormone levels in those with hypopituitarism. Treatment of symptomatic individuals consists of transsphenoidal surgery. Asymptomatic adenomas smaller than 2 centimeters, however, can be monitored with an MRI, visual field testing, and screening for hormone hypo- or hypersecretion.

Functional adenomas, on the other hand, often lead to an excess of hormones. First, lactotroph adenomas, or prolactinomas, are the most common type. Now, what you need to know is that, normally, prolactin secretion is controlled by the hypothalamus, which inhibits its production by releasing dopamine via the tuberoinfundibular pathway, and stimulates its production via thyrotropin releasing hormone or TRH. Prolactin also causes negative feedback by inhibiting its own secretion since it causes dopamine release from the hypothalamus. However, when there’s too much prolactin, dopamine inhibition is lost, and the hypothalamus can’t regulate prolactin production anymore. Now, a macroadenoma can also obstruct the flow of dopamine from the hypothalamus, but compared to prolactinomas, the elevation in prolactin is usually mild and under 100 ng/ml. In premenopausal females, the main symptom of hyperprolactinemia is galactorrhea, or a milky nipple discharge outside of breastfeeding or pregnancy. Now, another high-yield consequence is that excess prolactin suppresses hypothalamic production of gonadotropin-releasing hormone or GnRH, which leads to the pituitary secreting less LH and FSH. And without gonadotropin stimulation, gonads can’t secrete sex hormones like estrogen and progesterone, causing hypogonadism. Hypogonadism symptoms can include infertility, amenorrhea, which is absent menstruation, and vaginal dryness. Osteoporosis is another consequence that’s frequently tested, which can occur due to loss of bone density secondary to decreased estrogen levels. And as a result, these female individuals tend to suffer fragility fractures. Males typically develop decreased libido, impotence, infertility, gynecomastia, and, rarely, galactorrhea. Most individuals can also present with compression symptoms like bitemporal hemianopia and headaches as well. A brain MRI scan showing the tumor's size and extent and a blood test showing high serum prolactin levels confirm the diagnosis. Treatment relies on dopamine agonists like cabergoline or bromocriptine that inhibit prolactin secretion just like dopamine would. If the tumor is large, transsphenoidal resection could be attempted.

Somatotroph adenomas make growth hormone and are the second most common type of pituitary adenoma. Excess growth hormone causes different symptoms in children versus adults. In children, it causes gigantism, which is an increase in body size and height with disproportionately long arms and legs. Something to remember is that these kids can get really tall because, unlike other causes of gigantism, GH doesn’t accelerate epiphyseal closure of the bone, which is responsible for linear growth. In adults, it causes acromegaly, where there’s enlargement of the bones of the skull, hands, and feet. Other possible features of acromegaly include a large tongue with deep furrows, deep voice, diaphoresis, which is excessive sweating, impaired glucose tolerance, and increased risk of colorectal polyps and cancer. In both gigantism and acromegaly, there can also be enlargement of visceral organs, like the heart. Screening for a somatotroph adenoma is actually a high-yield topic. It’s done by measuring insulin-like growth factor 1, or IGF-1 levels, which is a liver-produced hormone through which GH stimulates long bone growth. This is because daily GH secretion is pulsatile but it stimulates the liver to release a constant amount of IGF-1 throughout the day. If high levels are detected, an oral glucose tolerance test is performed, where serum GH is measured before and after glucose administration. This is because, in healthy people, a higher blood glucose level usually causes the body to stop producing GH. If GH levels stay the same, growth hormone hypersecretion can be diagnosed. Brain MRI might also be required to assess the location and size of the tumor. Treatment consists of transsphenoidal resection. If surgery is unsuccessful, medical therapy is done with dopamine agonists like cabergoline or a GH receptor antagonist like pegvisomant. Some cases might also require radiotherapy.

Corticotroph adenomas secrete excess ACTH, causing Cushing disease. Cushing disease is different from Cushing syndrome. Cushing syndrome refers to all the symptoms caused by high cortisol levels which can be caused not only by Cushing disease but many other conditions, including ACTH-secreting ectopic tumors or adrenal tumors. Ok so, possible symptoms include a change in fat distribution, causing-moon facies, a round, full moon shaped face, buffalo hump, which is a fatty deposit on the upper back, and truncal obesity where fat accumulates around the abdomen and trunk rather than in the limbs. Cushing disease can also result in skin hyperpigmentation. This is due to increased levels of melanocyte-stimulating hormone or MSH, which signals melanocytes to produce a lot of melanin, turning the skin darker than normal. This occurs because ACTH shares a common precursor with MSH, called pro-opiomelanocortin, so when ACTH production increases, more MSH is also produced. Ok, so diagnosis is based on elevated serum ACTH and elevated 24 hour urinary cortisol levels. However, keep in mind that a high-dose dexamethasone suppression test is also needed to distinguish between a pituitary or an ectopic secretion of ACTH. Dexamethasone is a synthetic corticosteroid that provides negative feedback to the pituitary gland, resulting in suppression of ACTH production. So, if after the test, ACTH and cortisol levels drop, it means the elevation was caused by a pituitary tumor. If the levels stay the same, it means there’s an ectopic source of ACTH. Treatment is also transsphenoidal resection, but if the entire tumor can’t be removed, then radiation therapy can be used. Therapy with drugs that block the adrenal synthesis of cortisol, like metyrapone can also be initiated to control the symptoms. If medications aren’t sufficient to block the cortisol effects, a last resort is to surgically remove both adrenal glands.