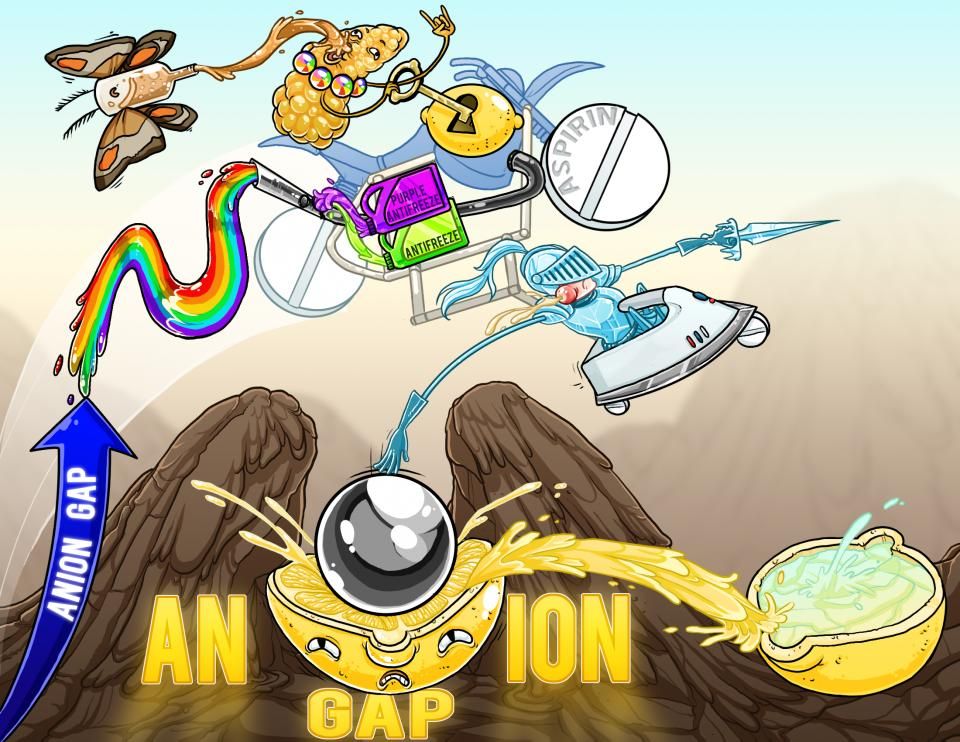 Every single moment, trillions of cations and anions are floating around inside our blood vessels. For them to happily and stably coexist, the plasma has to be kept electrically neutral.

The majority of anions are chloride Cl− ions, followed by bicarbonate HCO3− ions, then phosphate PO43- ions, then sulfate SO42- ions, and finally some organic acids and negatively charged plasma proteins, like albumin.

So, to prove that there’s electroneutrality, let’s say we try to measure the concentration of the cations and anions in our plasma.

So just counting up these three ions, there’s a difference, or “gap” between the sodium Na+ concentration and the sum of bicarbonate HCO3− and chloride Cl− concentrations in the plasma, which is 137 minus 128 (104 plus 24) or 9 mEq/L.

This is known as the anion gap, or in other words, how many more cations are there than anions.

Now just a few moments ago, we said that cations equal anions, so why does this gap even exist? Well, it’s because sodium Na+ accounts for the vast majority of cations in the plasma, but by measuring only chloride Cl− and bicarbonate HCO3−, we are ignoring a bunch of anions, including the anion component of several organic acids and negatively charged plasma proteins, like albumin.

In other words, this anion gap represents all these unmeasured, ignored negative charges out there, and normally, ranges between 3 and 11 mEq/L.

If the anion gap is high, it’s usually because there’s an unusually high amount of these unmeasured anions.

Calculating the anion gap is a useful diagnostic tool, because it can help identify potential causes of metabolic acidosis.

“Acidosis” refers to a process that lowers blood pH to less than 7.35 and “metabolic” refers to the fact that it’s caused by a decrease in the concentration of bicarbonate HCO3− ions.

One way that the bicarbonate HCO3− ion concentration decreases is by binding of bicarbonate HCO3− ions and protons H+, which results in the formation of H2CO3 carbonic acid, which subsequently breaks down into carbon dioxide CO2 and water H2O. These protons come off of various organic acids.

For example, in cases of heart failure, when not enough blood is pumped to the tissues, the cells won’t have much oxygen to break down glucose, so they will be forced to accumulate lactic acid molecules- each of which has a proton to donate. That’s known as lactic acidosis.

Another situation might be diabetic ketoacidosis which leads to the buildup of ketoacids, which are also molecules that carry along a proton.

Another situation might be after accidental ingestion of ethylene glycol, which is a common antifreeze. This can cause oxalic acid to build up.

A metabolite of methanol, a highly toxic alcohol, is formic acid.

Paint or glue has a molecule called toluene, which leads to a buildup of hippuric acid.

Organic acids, such as uric acid or sulfur- containing amino acids, might also build up in chronic renal failure, because the kidneys simply can’t get rid of them.