A 30-year-old woman, gravida 3 para 2, is admitted to the labor and delivery unit in active labor. This pregnancy was complicated by gestational diabetes mellitus, which was managed with metformin. An hour after admission, the patient delivers a healthy baby weighing 4100 g (9 lb 1 oz). Thirty minutes after the placenta is delivered, blood starts flowing profusely from the vaginal vault. Placental examination reveals it is fully intact. The patient’s temperature is 37.0°C (98.6°F), pulse is 102/min, respirations are 20/min, and blood pressure is 80/60 mmHg. On physical examination, the uterus is soft and boggy. A large-bore IV catheter is inserted, followed by fluid and blood resuscitation. Which of the following is the most appropriate step in management? 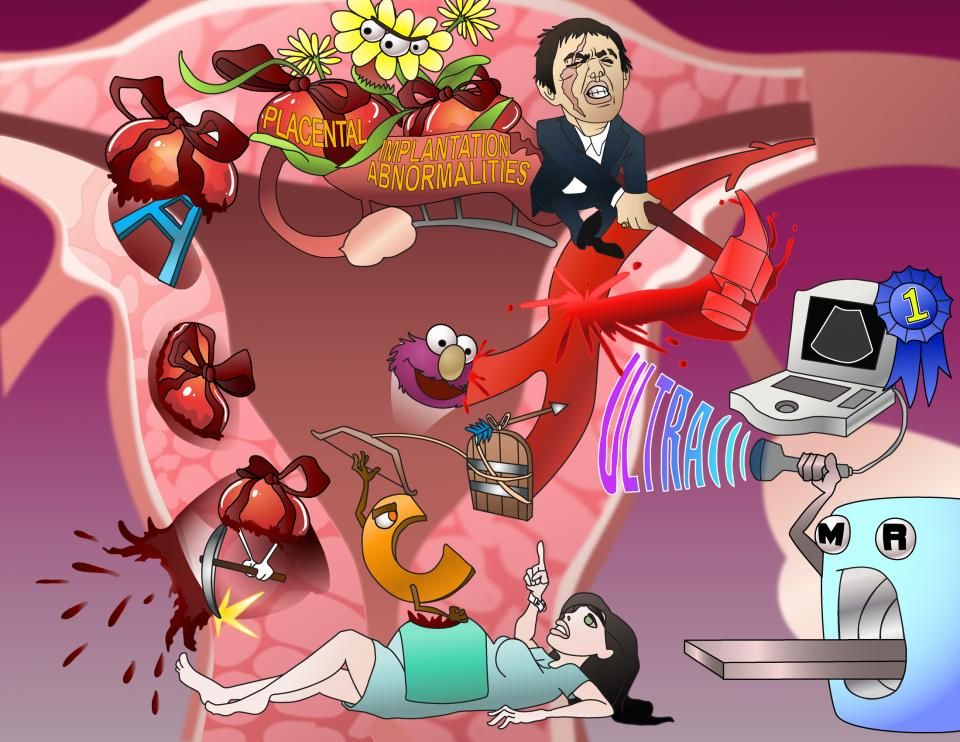 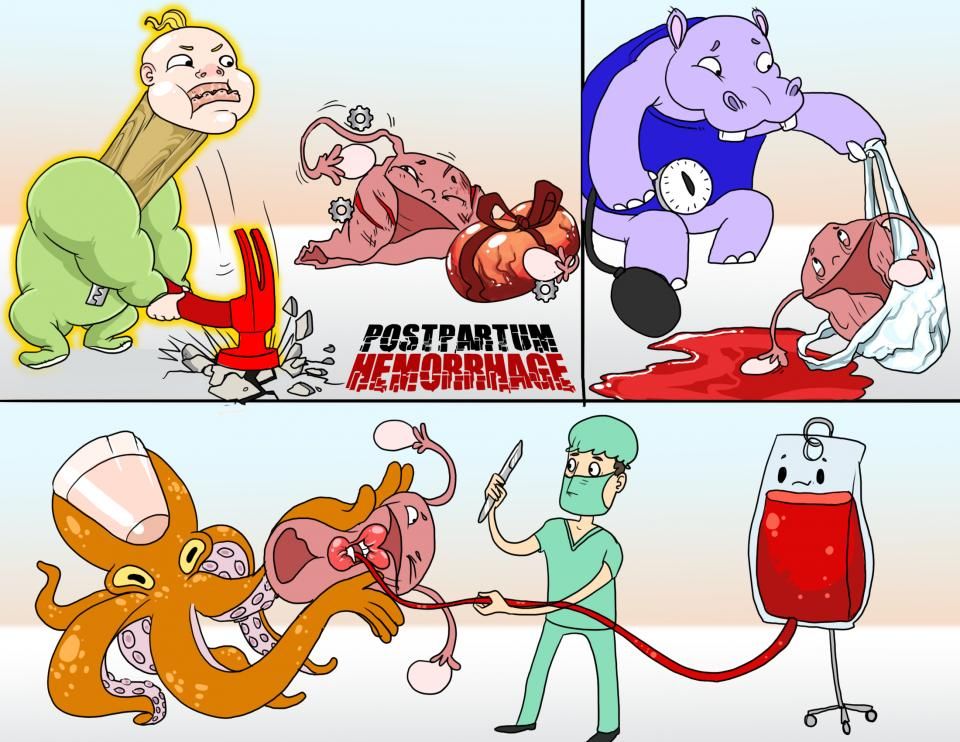 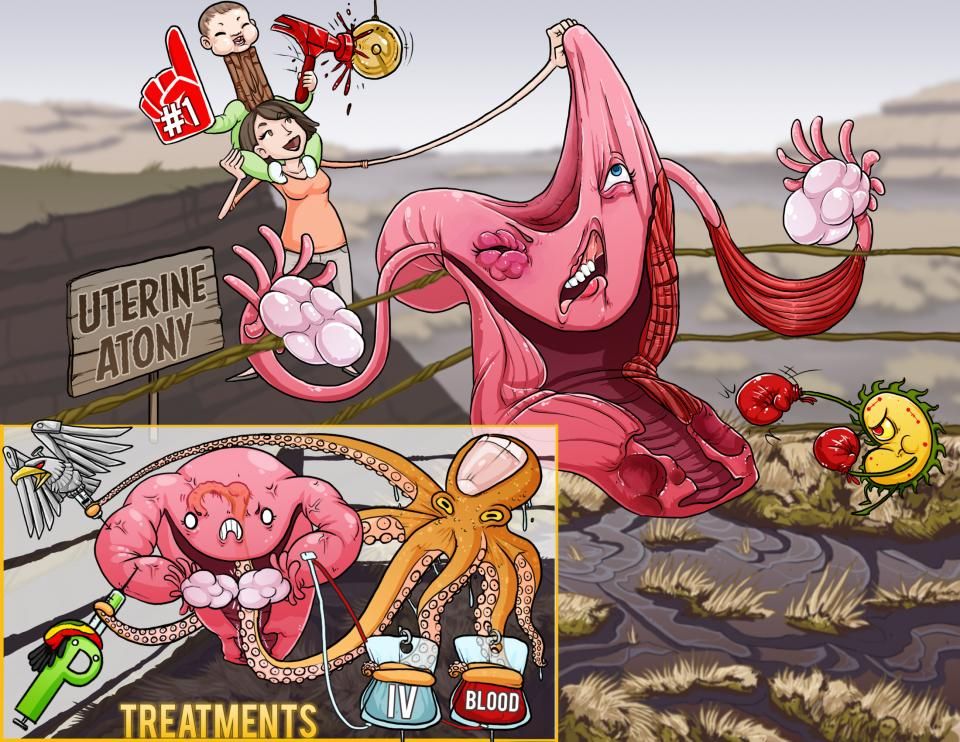 But in rare situations, it happens later than 24 hours after delivery, and that’s where it’s called late, or secondary postpartum hemorrhage.

Postpartum hemorrhage, like any ongoing bleeding, can be classified according to the degree of hypovolemia and vital signs status.

Stage 1 is when 500 to 1000 milliliters of blood have been lost. Blood pressure is usually normal, but there may be palpitations, tachycardia and slight dizziness.

Finally, stage 4 is when more than 2000 milliliters have been lost, systolic blood pressure is less than 70 mmHg, and symptoms may include cardiovascular and respiratory collapse, loss of consciousness and and anuria.

C stands for circulation - meaning measuring vital signs and establishing the degree of hypovolemia, inserting two large caliber peripheral IV catheters - of at least 14 gauge or even larger-gauge -, and starting fluid resuscitation immediately, with 500 milliliters of normal saline or lactated Ringer’s solution given over 30 minutes.

Afterwards, the rate of fluid is adjusted depending on their hemodynamic status.

In females who have lost more than 1500 milliliters of blood, blood transfusions are indicated, typically with products containing both red blood cells and platelets.

The definitive management of postpartum hemorrhage depends on the underlying cause.

The most common causes of postpartum hemorrhage can be remembered as 4 T’s - tone, trauma, tissue, and thrombin.

Tone refers to uterine atony, which is the predominant cause of bleeding.

Trauma refers to damage to the genital tract structures - like vaginal or cervical lacerations or hematomas, perineal tears, or uterine rupture.

Tissue refers to the issues with the placenta and other fetal tissues.

And thrombin is a T-word to help you remember coagulation disorders.

Finally, another cause aside from the 4 T’s is uterine inversion - which is when the placenta fails to detach from the uterine wall, and pulls the uterus inside-out as it exits. So a T-phrase to remember this might be “Turned inside out”.

So let’s start off with uterine atony. Normally, after delivery, the uterus continues to contract, which squeezes shut the spiral arteries that used to nourish the placenta, therefore reducing uterine bleeding.

With uterine atony, though, the uterus doesn’t contract properly, so the spiral arteries don’t clamp down, which leads to excessive bleeding and postpartum hemorrhage.

Risk factors for uterine atony are uterine overdistention, so anything that makes the uterus stretch out too much - like pregnancies with more than one fetus, more than 4 previous deliveries, or hydramnios, which is too much amniotic fluid.

Uterine atony can also occur when the uterine muscles fatigue during the delivery process because of a prolonged labor - which is defined as labor lasting more than 20 hours in a first delivery, or more than 14 hours in females who have previously given birth.

Additionally, prior C-sections or uterine surgery, as well as a full bladder, which can develop in females that are unable to pass urine following anesthesia, can all make it harder for the uterus’ to fully contract.

Finally, some obstetric medications like anesthetics - especially halothane, as well as magnesium sulfate, nifedipine, and terbutaline can all increase the risk of uterine atony.

To prevent uterine atony, prophylactic uterotonic medication should be given to all females during the third stage of labor - most frequently, following delivery of the placenta.

In females with no risk factors or at low risk for uterine atony, any single one of these agents is recommended.

In females at high risk for uterine atony, combinations like oxytocin and misoprostol or oxytocin and methylergonovine are recommended.

The diagnosis of uterine atony is clinical - on palpation, the uterus feels boggy, soft and enlarged, and the vaginal examination confirms that the predominant bleeding is not coming from a vaginal or cervical laceration.

Although sometimes there can be some birth canal trauma along with uterine atony.

After supportive measures have been undertaken, definitive treatment for uterine atony starts with uterotonic medication and bimanual uterine massage.

If that doesn’t control the bleeding, a second uterotonic medication like methylergonovine, carboprost tromethamine, or misoprostol may be used.

Another medication which may be used in conjunction with uterotonics is tranexamic acid, a synthetic analogue of lysine.

Tranexamic acid has antifibrinolytic activity, so it prevents clot degradation. 1 gram is usually given within 3 hours of delivery, and if bleeding persists after 30 minutes, another 1 gram dose may be given.

In the meantime, epidural or spinal anesthesia may be given, and a bimanual uterine massage can be done to control the bleeding.

This is done with one hand on the abdomen, which massages the uterine fundus, and the other hand made into a fist, which is inserted into the vagina - specifically, all the way up to the anterior vaginal fornix - and pressed against the anterior uterine wall.

Direct pressure helps compress the spiral arteries to help control the bleeding, and it helps stimulate uterine contractions as well.

If uterotonic medication and uterine massage doesn’t stop the bleeding, and the female is hemodynamically stable, then intrauterine balloon tamponade can be done.

That’s where a tool called the Bakri Postpartum balloon, which is a catheter with a balloon at the tip, is inserted into the uterus under sonographic guidance. Then the balloon is slowly inflated with saline, to help tamponade the bleed from within.

Another technique is uterine artery embolization, which is an interventional radiology technique.

This is when a catheter is inserted through the femoral artery, and advanced up to the uterine arteries. Then, a contrast agent is injected, and the site of the bleeding is where the contrast seems to spill out of the vessel.

Embolization is done by inserting a gel through the catheter, to plug either the left or the right uterine artery, depending on where the bleeding seems to be coming from.

Finally, if the bleeding still doesn’t stop, then surgical ligation of the uterine arteries, or, a hysterectomy can be done, but those are done as a last resort.

Alright, now the second most common cause of postpartum hemorrhage is trauma - so any kind of injuries to the birth canal, like cervical or vaginal lacerations or hematomas, perineal tears, or uterine rupture.

Risk factors include a large fetus, hasty deliveries, and iatrogenic causes like an episiotomy - which is when an incision is made to enlarge the vaginal opening in order to allow the baby to pass through.

Postpartum hemorrhage is defined as blood loss of more than 500 mL for a vaginal delivery, or more than 1000 mL for cesarean delivery, within the first 24 hours following childbirth. Signs and symptoms may initially include: an increased heart rate, feeling faint upon standing, and an increased breath rate.

Risk factors for PPH include prolonged labor, a large baby, placenta complications, an infection, or underlying medical conditions. Treatment for PPH depends on the cause and can range from uterine massage to a blood transfusion. Prevention strategies include proper prenatal care, labor monitoring, and active management of the third stage of labor.