A 33-year-old woman, gravida 1, para 1, comes to the office for her 6-week postpartum visit. She had a spontaneous vaginal delivery complicated by significant postpartum hemorrhage and required a blood transfusion. She reports difficulty with lactation since her delivery as well as recent hair loss, weight gain, amenorrhea, and loss of libido. Which of the following is the most likely diagnosis? 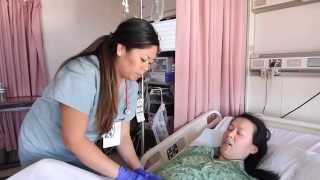 Postpartum hemorrhage is a significant loss of blood after giving birth, and it’s the number one reason for maternal morbidity and maternal death around the world.

Specifically it’s defined as losing more than 500ml of blood after a vaginal delivery or more than 1000ml after a cesarean section delivery.

Of course, deliveries can be messy and it’s impossible to measure the precise amount of blood that’s lost, and there’s the possibility of internal bleeding.

So additional criteria to consider for postpartum hemorrhage include a decrease of 10% or more in hematocrit from baseline, as well as changes in the mother’s heart rate, blood pressure, and oxygen saturations —all of which suggest a significant blood loss.

The most common causes of postpartum hemorrhage can be lumped into four groups which can easily be remembered as the “4 Ts”: Tone, Trauma, Tissue, and Thrombin.

Tone refers to a lack of uterine tone, also known as uterine atony—basically a soft, spongy, boggy uterus, and this is the main cause of postpartum hemorrhage, generally resulting in a slow and steady loss of blood.

Now, the uterus is a muscular organ wrapped by three layers of smooth muscle called the myometrium, which contracts during labor to dilate and efface the cervix and ultimately push out the fetus and placenta.

After delivery, the myometrium continues to contract and this squeezes down on the placental arteries at the point where they are attached to the uterine wall, which clamps them shut, and therefore reduces uterine bleeding.

The contractions continue for a few weeks after the delivery.

With uterine atony, though, the uterus fails to contract after birth, and those placental arteries don’t clamp down, which leads to excessive bleeding and postpartum hemorrhage.

Uterine atony can be caused by several things, repeated distention of the uterus as a result of multiple pregnancies, overstretching from twins or triplets, or any condition that causes too much uterine stretching can interfere with efficient uterine contractions and lead to diminished tone and eventual uterine atony.

Uterine atony can also occur when the uterine muscles fatigue during the delivery process because of a prolonged labor.

It can also happen when a woman is unable to empty her bladder, since a full bladder can push against the uterus and interfere with uterine contractions.

Finally, some commonly used obstetric medications like anesthetics (especially halothane), as well as magnesium sulfate, nifedipine, and terbutaline can all interfere with uterine contractions and increase the risk of uterine atony.

Uterine atony can be treated by fundal massage, or massaging the fundus—the upper section of the uterus which is typically near the umbilicus right after birth.

Fundal massage causes the smooth muscle in the wall uterine wall to contract and harden.

If a full bladder seems to be interfering with contractions, then a woman can urinate or have a catheter placed if she can’t void by herself.

Medications to help firm up the uterus can also be given, and if necessary, the bleeding may be stopped surgically.