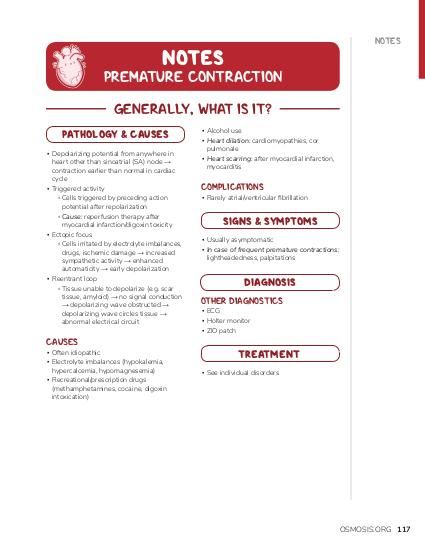 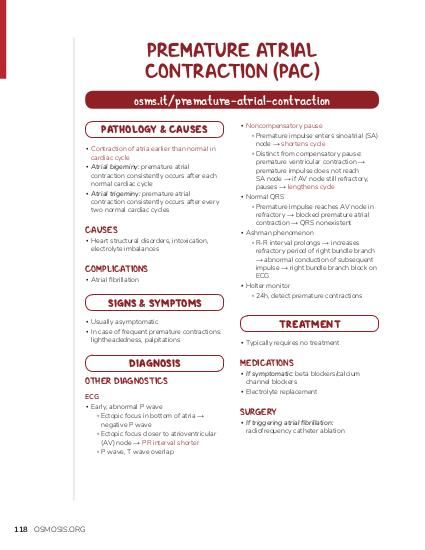 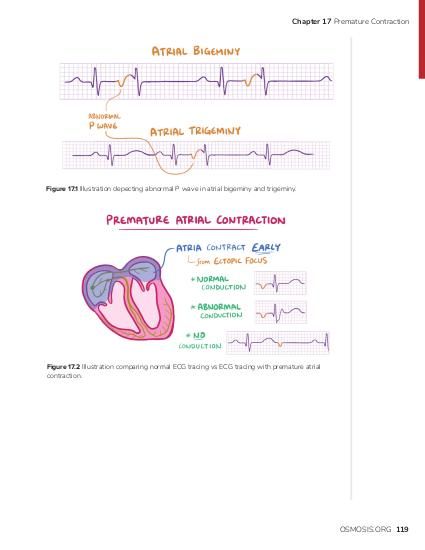 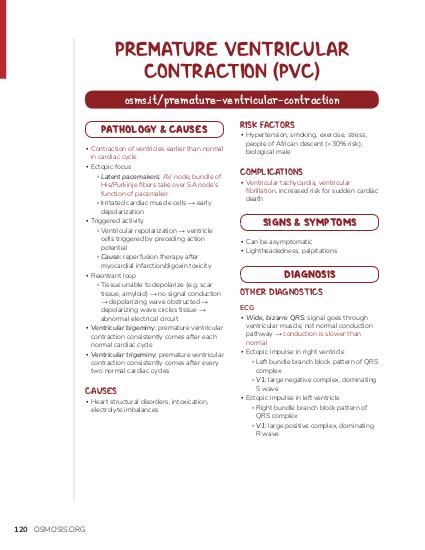 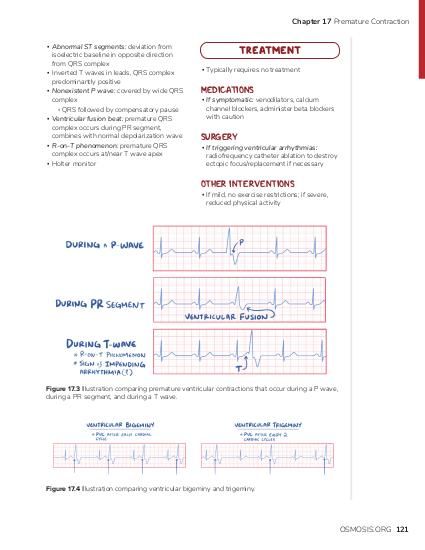 The heart has two lower chambers, called the ventricles, so a premature ventricular contraction is when the ventricles contract earlier than normal in the cardiac cycle. This happens because an abnormal contraction signal, called a depolarization, originates from somewhere in the ventricles rather than coming from the pacemaker cells.

So, if we simplify this heart a little bit, normally, the sinoatrial node or SA node sends an electrical signal that propagates out through the walls of the heart and contracts both upper chambers. Then that signal moves to the atrioventricular node or AV node, where the signal is delayed for a split second, and then it goes down into the ventricles or lower chambers where it moves down the bundle of His and into the left and right bundle branches and into each ventricle’s Purkinje fibers, causing them to contract as well. So, in a healthy heart the upper chambers contract first, then shortly after, the lower chambers contract. On an electrocardiogram or ECG, which measures the electrical activity of the heart via electrodes that are placed on the skin, the atrial depolarization, and therefore its contraction, is seen as a p-wave; the ventricular contraction is seen as a QRS complex; and the ventricular repolarization, and therefore its relaxation, is seen as a T-wave.

Now, if we just look at the QRS complex, which normally lasts less than 100 milliseconds or 2-and-a-half little boxes, it’s usually made up of three smaller waves, also called deflections. If the first wave after the p-wave is downwards, or negative, it’s called a Q wave - which you can remember by the letter Q having a downward tail. If the next deflection is upward, or positive, then it’s called the R wave. If, though, the first wave after the p-wave is upwards, instead, or positive, you basically skip the Q and just call it an R wave. Finally, any downward deflection after the R wave is called the S wave.

Now, the interesting thing is that in addition to the pacemaker cells in the SA node, cells in the AV node, the Bundle of His, and the Purkinje fibers, all have the ability to generate an electrical potential. Those last three are called latent pacemakers, and they have slower depolarization rates—which is the rate at which they fire off electrical signals—and they get slower as you move further down. Let’s use this bar to visualize the SA node’s depolarization rate, which is the fastest, and then each one below is slightly slower. Notice that each time the SA node fires, it resets all the slower ones, and this is exactly how it works. If, for example, the SA node stopped altogether, then the AV node would take over at its slightly slower pace. Now, though, let’s say you have a ventricular ectopic focus somewhere in the ventricles, which is a cell or area of tissue that sends off an early depolarization wave, before even the SA node gets to fire. This is what leads to a premature ventricular contraction, or PVC.

One cause of a latent pacemaker cell or cardiac muscle cell depolarizing early is it gets enhanced automaticity, which might result from irritating stressors like electrolyte imbalances, drugs like cocaine or methamphetamines, ischemic damage like a heart attack, or anything that increases sympathetic activity, like anxiety. Ectopic beats can also have “triggered activity,” which is where cells depolarize early. The exact mechanism here, though, is unclear, but it might be due to an ion channel dysfunction that leads to an unexpected change in the membrane potential during or right after repolarization. When a cell depolarization happens during ventricular repolarization, it’s called an early-afterdepolarization, and if it happens after repolarization is finished, it’s called a delayed-afterdepolarization.