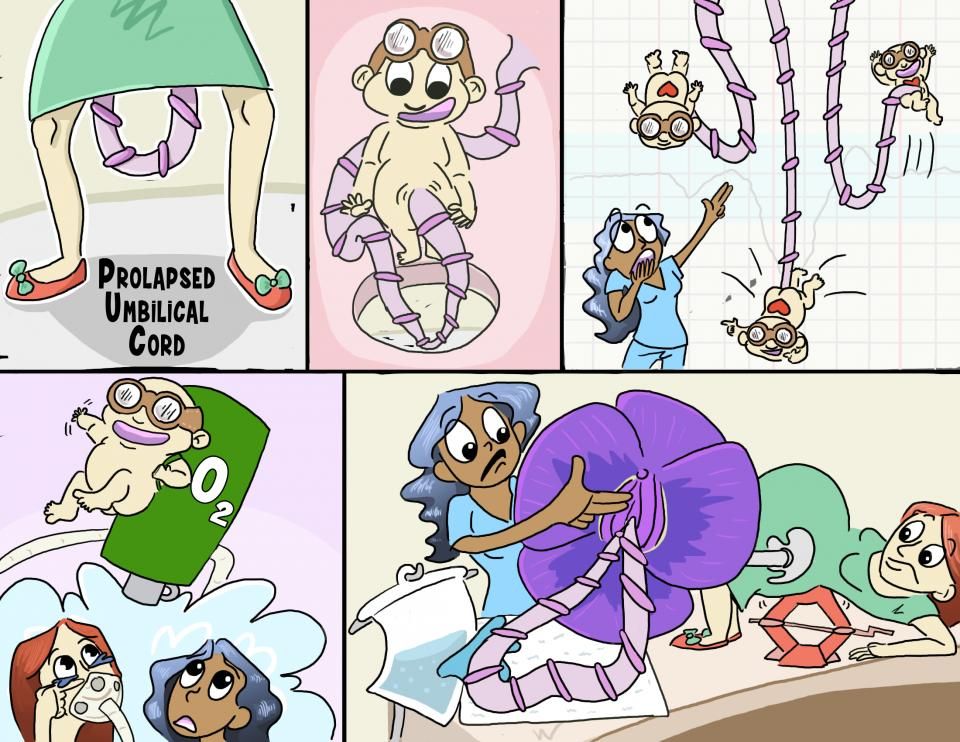 Tao Wang, G3T2P0A0L2 at 39 weeks of gestation, is a 36-year-old female client who is admitted to the labor and delivery unit after she started having contractions every 5 minutes, each lasting 60 seconds.

She has no medical issues impacting this present pregnancy. A prolapsed umbilical cord is a rare but life-threatening obstetric emergency that occurs when the umbilical cord is abnormally positioned between the fetal presenting part and the cervix.

Normally, the fetal presenting part is its head, which during vaginal delivery descends through the birth canal first, followed by the upper body, and finally, the lower body, umbilical cord and placenta.

Now, the umbilical cord is a soft, tortuous bundle of blood vessels that is attached to the umbilicus of the fetus and connects to the center of the placenta.

As a result, during vaginal delivery, the descending fetus compresses the umbilical cord, resulting in a decreased blood and oxygen supply to the fetus, which can cause fetal hypoxia.

Now, a prolapsed umbilical cord does not always have a clear cause, but there are some factors that may increase the risk of developing cord prolapse.

On the other hand, modifiable risk factors are often related to interventions that could displace the presenting part, including amniotomy or artificial rupture of membranes, external cephalic version, and placement of a cervical ripening balloon or intrauterine pressure catheter.

Generally, the first symptoms that a client may report include feeling or seeing the umbilical cord protruding from their vagina.

As the umbilical cord is compressed and fetal circulation is compromised, other symptoms can include decreased fetal movement and fetal heart rate abnormalities, such as bradycardia or severe decelerations.

In addition, there can be several complications, including neonatal encephalopathy, cerebral palsy, and fetal mortality, especially when the cord prolapses outside of the hospital setting.

On the other hand, the diagnosis of an occult prolapsed umbilical cord is less straightforward and is typically based on unexplained fetal heart rate abnormalities on fetal heart rate monitoring, especially if they occur suddenly after the membranes rupture or when risk factors are present.

As soon as a prolapsed umbilical cord is diagnosed, an obstetrician should be notified immediately, and the team should prepare for delivery.

An emergency cesarean birth is the preferred mode of delivery, but vaginal delivery might be considered if birth is imminent.

In the meantime, continuous fetal heart rate monitoring should be performed until delivery. A priority is to relieve cord pressure so the fetus can receive adequate oxygenation.

This can be achieved by elevating the fetal presenting part with a gloved hand, positioning the mother in a knee to chest position or steep Trendelenburg position, or inserting a Foley catheter to fill the mother’s urinary bladder with 500 to 700 mL of saline.

To prevent umbilical artery vasospasm, which would worsen fetal hypoxia, it is essential to avoid excessive manipulation of the umbilical cord, as well as keeping it warm and moist if it is protruding from the vagina.

This can be accomplished by soaking a sterile towel in warm normal saline and loosely wrapping it around the protruding cord.

Additionally, the mother should be given supplemental oxygen by face mask to increase fetal oxygenation.

Finally, if delivery is likely to be delayed, a tocolytic, such as terbutaline, might be administered to decrease uterine contractions and relieve pressure on the umbilical cord.

Alright, returning to Ms. Wang, you begin her assessment. Heart sounds are normal, lung sounds are clear, and bilateral lower extremities are free of edema.