A 40-year-old man is brought to the emergency room by the police after he was involved in a physical altercation at a friend’s home. Upon physical examination, the patient is disheveled. He is very agitated and the decision is made to place him in restraints. Head, eyes, ears, nose, and throat exam reveals temporal wasting, marked tooth decay, and oropharyngeal burns. His pupils are dilated and minimally reactive to light. His skin shows dramatic diaphoresis as well as excoriations over his arms. Vital signs show temperature of 39° C, pulse of 120, respirations of 25 breaths/minute, and blood pressure of 150/100 mm Hg. Urine drug screen is positive for amphetamine. Which of the following is a life-threatening complication of the toxicity seen in this patient? 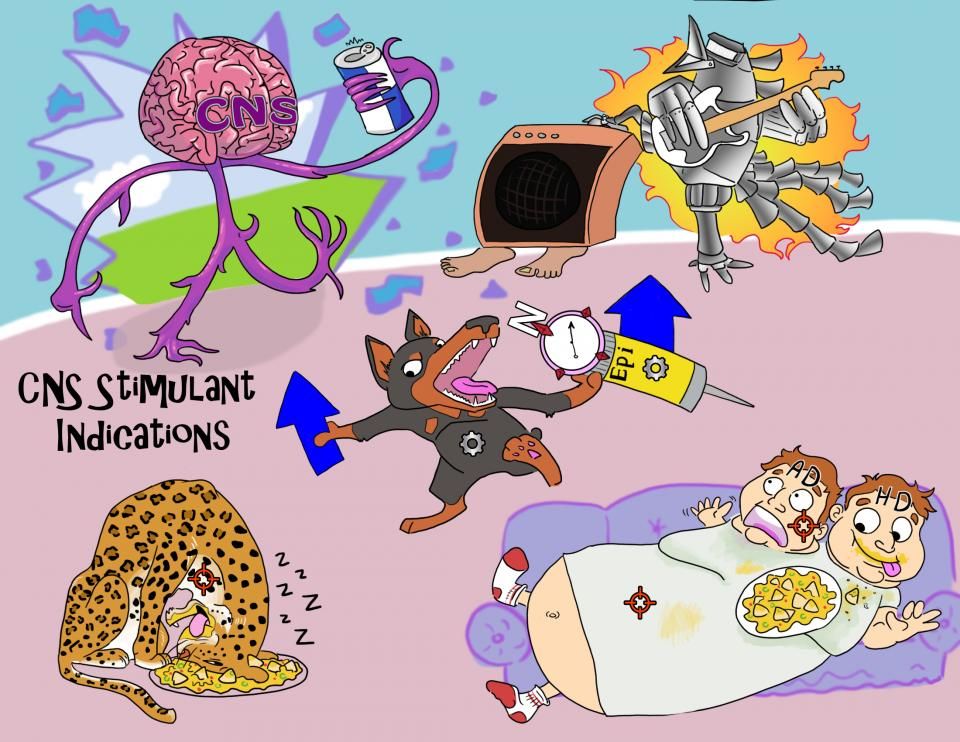 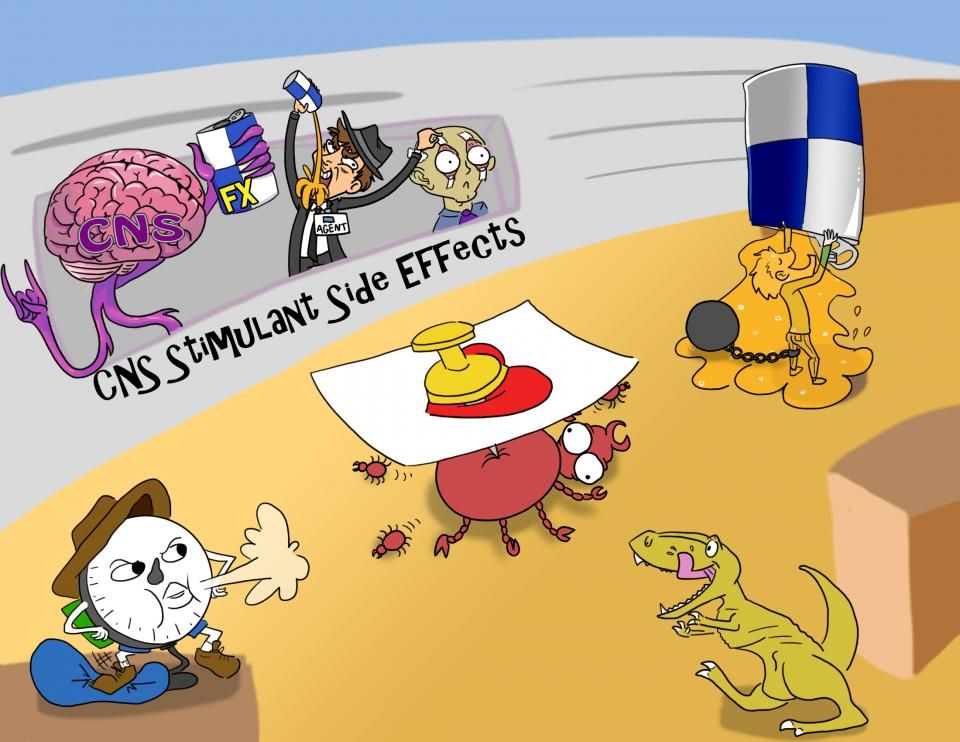 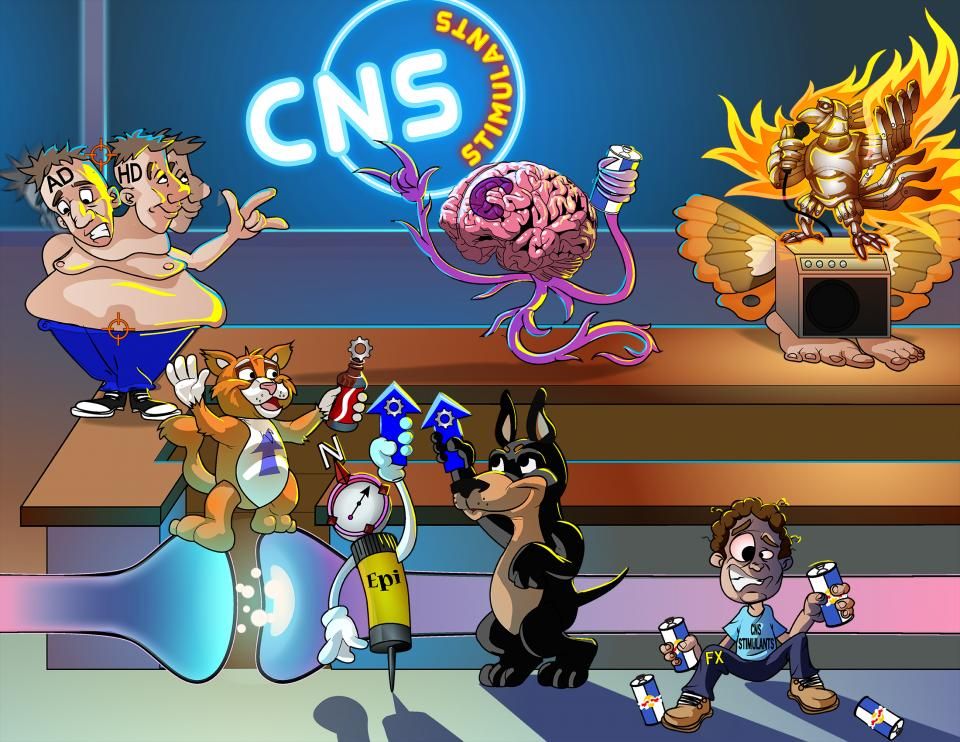 Psychomotor stimulants are drugs that stimulate the central nervous system to increase motor activity and to produce euphoria, excitement, and a feeling of having lots of energy.

Unfortunately, some drugs of abuse, like methamphetamine or cocaine, belong to this class of substances.

However, there are a few medications in this class that do have clinical applications so let’s go over those.

To understand how psychomotor stimulants work, let’s zoom in on one of the synapses of the brain.

Normally electrical signals, or action potentials, travel down the axon to the axon terminal, where they trigger the release of chemical messengers, called neurotransmitters, from synaptic vesicles into the synapse.

After the neurotransmitters have done their job, they unbind from the receptors, and can: diffuse away, get degraded by enzymes, or get picked up by proteins and returned to their original release site in a process called reuptake.

Psychomotor stimulants, in general, increase the release of certain neurotransmitters, but their biggest effect is blocking reuptake receptors on presynaptic axon terminals.

Both actions keep neurotransmitters - like dopamine, norepinephrine, and serotonin - in the synapse longer, and increases their effects.

For example, increased concentrations of dopamine in the brain’s reward pathway, which includes the nucleus accumbens, ventral tegmentum, and prefrontal cortex, produce intense feelings of euphoria, pleasure, and the emotional “high” associated with psychomotor stimulants.

And finally, higher levels of serotonin are associated with greater confidence and happiness, and decreased anxiety.

Okay, for psychomotor stimulants with medical applications, let’s start with the popular methylxanthines.

We are all familiar with this class of medication since it includes caffeine and theophylline found in coffee and tea respectively.

Now both these substances cause a stimulatory effect by blocking receptors for adenosine, a chemical that has numerous effects in the body like decreasing heart rate, decreasing neuronal activity - triggering sleepiness, and dilating blood vessels.

Now, migraines and other headaches can be caused by increased adenosine levels in the brain, so caffeine is often combined with an NSAID or acetaminophen to treat them.

Theophylline, on the other hand, is used to treat respiratory disorders like COPD and asthma.

It works by inhibiting the enzyme phosphodiesterase, or PDE, in the smooth muscles in the respiratory tract.

By inhibiting this enzyme, we increase the level of cAMP within the cell, and trigger smooth muscle relaxation and bronchodilation.

An overdose of methylxanthines can cause anxiety, nausea, arrhythmia, and seizures, so watch your coffee intake!

Another medication that can help you stay awake is Modafinil.

It’s mainly used to treat narcolepsy, a condition where the person can fall asleep at any moment of the day and has episodes of paralysis out of the blue - not cool, right?

Well, modafinil inhibits dopamine reuptake and increases the release of glutamate and histamine in the brain, all of which increases arousal.

Modafinil is sometimes used as a “cognitive enhancer” off-label, but there’s no research to support this claim.

Okay, let’s move on to the next group of medication like amphetamines and methylphenidate which work by blocking the reuptake of dopamine and norepinephrine at the presynaptic neuron.

It’s the preferred treatment for attention deficit/hyperactivity disorder, or ADHD for short, because it helps improve focus and decreases the impulsivity common in people with this disorder.

It also doesn’t have major side effects, making it the preferred medication.

Finally, we have cocaine, sometimes called coke, which is a powerful psychomotor stimulant that has been used for over a thousand years.