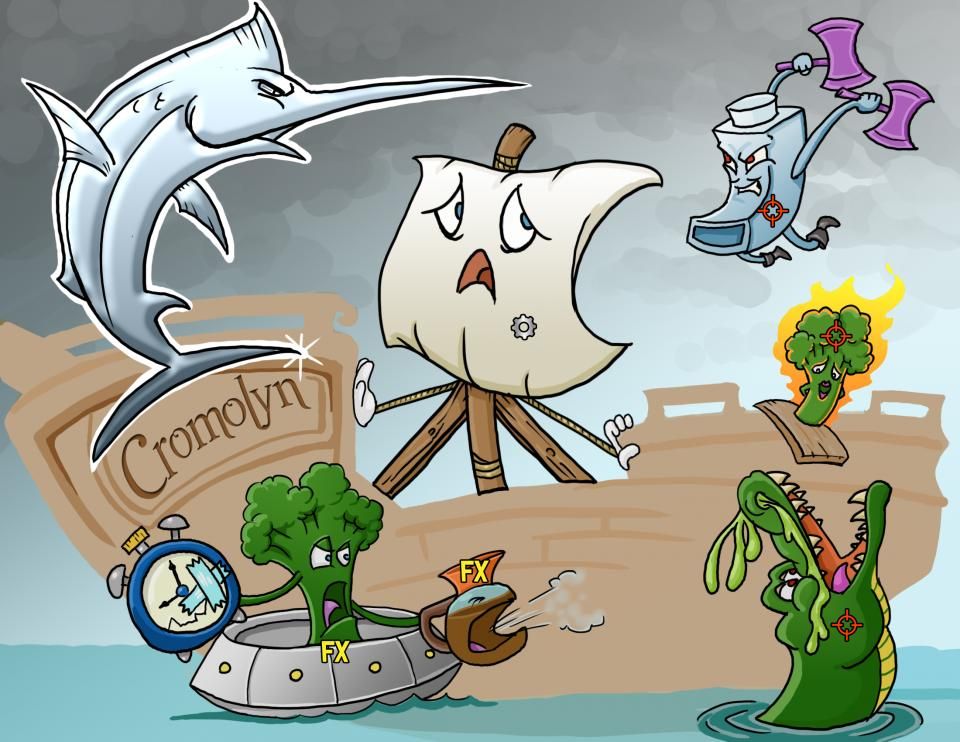 But, most of the times, narrowing of the airways actually occurs as a result of inflammation and excessive release of various inflammatory chemical mediators like leukotrienes and prostaglandins.

So, to effectively manage the disease, it’s important to give medications that will control the inflammation.

Now, the molecular pathway that leads to asthma is actually pretty complex, but it is often initiated by an environmental trigger.

Allergens from environmental triggers, like air pollutants or cigarette smoke, are picked up by dendritic cells which, present them to a type 2 helper cell or Th2 cell in the lamina propria.

These cells then produce cytokines like IL-4 and IL-5 which causes the inflammatory response.

IL-4 is especially important because it leads to the production of IgE antibodies by B-cells, and these antibodies bind to FcεR1 receptors on mast cells to activate them.

Now, IL-5, on the other hand, activates eosinophils, which promote an immune response by releasing more cytokines that attract other immune cells to the area.

Similarly, prostaglandins also bind to their receptors in the smooth muscles and mucus gland to cause a similar effect.

These mediators also increase the vascular permeability in the airways and attract more immune cells to the area.

Now, we have 3 ways to control the inflammation in asthma.

We can decrease the synthesis of the inflammatory mediators, inhibit their release, or prevent mast cell activation.

The most common way to stop the synthesis of prostaglandin and leukotriene is through the use of corticosteroids.

These medications are synthetic versions of glucocorticoid, or cortisol, which is the stress hormone produced in the adrenal cortex.

When these medications reach immune cells, they can pass through the cell membrane because they are steroids, which means they are lipophilic. Once inside, they inhibit the synthesis of all inflammatory cytokines.

In mast cells, they increase the production of annexin-1 proteins that inhibit the enzyme phospholipase A2. This stops the conversion of membrane phospholipid into arachidonic acid and decreases the synthesis of leukotrienes and prostaglandins.

Depending on the route of administration, corticosteroid therapy for asthma can be divided into two broad categories; inhaled therapy and systemic therapy.

Inhaled corticosteroids are often used alongside a bronchodilator like leukotriene receptor antagonist or a beta-2 agonist to control the disease more effectively.

Fluticasone, budesonide, beclomethasone, dexamethasone and mometasone are some of the commonly used inhaled glucocorticoids.

Among them, dexamethasone and fluticasone are the longer acting and more potent medications.

In general, prednisolone is the medication of choice.

Pulmonary corticosteroids and mast cell inhibitors are medications used to treat certain lung disorders. Corticosteroids are a class of drugs that reduce inflammation and swelling in the lungs, making it easier to breathe. They are often used to treat conditions such as asthma, chronic obstructive pulmonary disease (COPD), and certain types of lung infections. Mast cell inhibitors, also known as mast cell stabilizers, are a class of drugs that prevent the release of inflammatory mediators from mast cells in the lungs. They are often used to prevent symptoms of asthma and allergic rhinitis. They are less potent than corticosteroids but are generally well-tolerated with fewer side effects.