A 76-year-old woman presents to the emergency department with fatigue, decreased appetite, and muscle weakness. Past medical history includes chronic migraines, hypertension, gastroesophageal reflux, and a recent episode of podagra. Current medications include topiramate, lisinopril, acetazolamide, omeprazole, and probenecid. Temperature is 37.0°C (98.6°F), pulse is 104/min, respirations are 24/min, and blood pressure is 96/66 mmHg. Arterial blood gas and laboratory testing are obtained, and the results are shown below.

Which of the following medications most likely contributed to this patient’s disease? 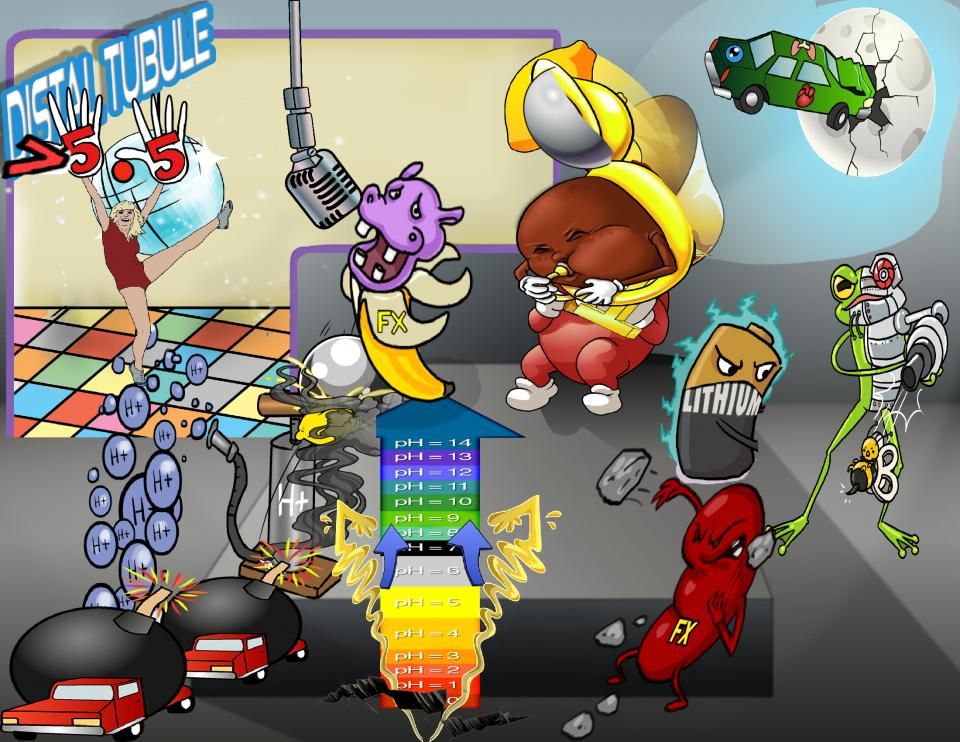 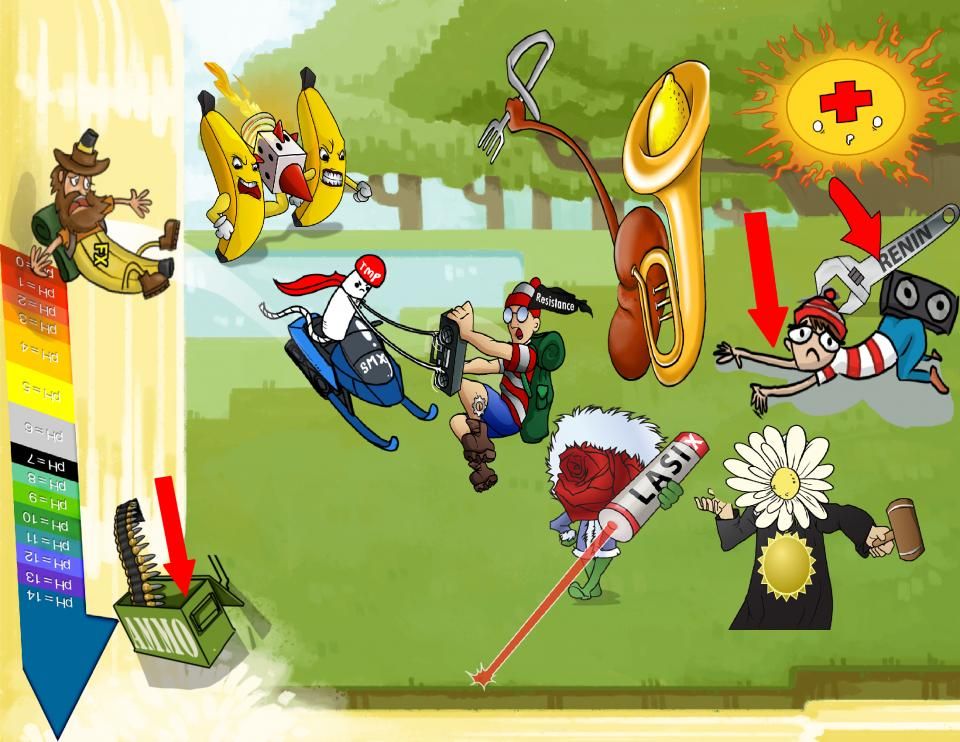 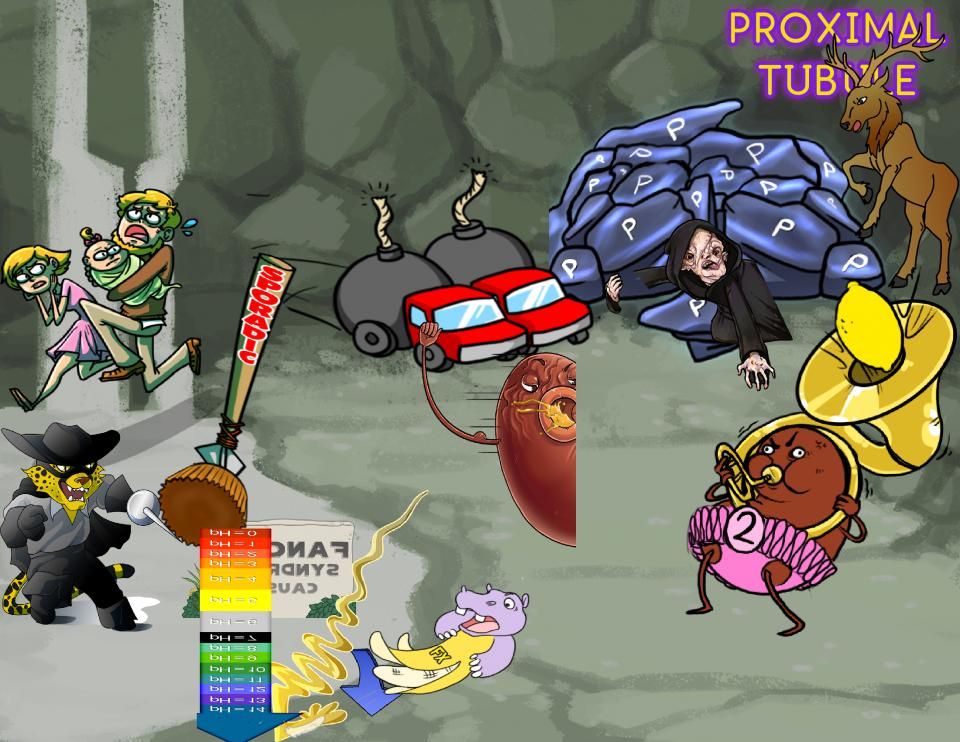 In the Emergency Department, two people came in with rapid, shallow breathing and tachycardia. The first one is 45 year old Olga who also has systemic lupus erythematosus and the second one is 39 year old Fred. An arterial blood gas was taken, along with electrolytes. Results showed that Olga had low pH, low bicarbonate and pCO2 levels and her potassium level was also low. Fred also had low pH, low bicarbonate and pCO2 levels, but his potassium level was high. Based on the ABG results, the diagnosis of normal anion gap metabolic acidosis was made. In order to identify the cause of their normal gap metabolic acidosis, more investigations were done and the urine anion gap showed that both individuals had a low urinary anion gap, which suggests that the cause was renal.

Okay, now, let’s review the physiology of the tubules. The proximal tubule is affected in RTA type II. It’s lined by brush border cells which have two surfaces: One is the apical surface that faces the tubular lumen and is lined with microvilli, and the other is the basolateral surface, which faces the peritubular capillaries. Now, a lot of bicarbonate is reabsorbed here. When bicarbonate approaches the apical surface it binds to hydrogen to form carbonic acid, which will be split into water and carbon dioxide by carbonic anhydrase. The water and carbon dioxide diffuse into the cells where carbonic anhydrase facilitates the reverse reaction and combines them to form carbonic acid, which dissociates into bicarbonate and hydrogen. Then bicarbonate will get into the blood with the help of a sodium bicarbonate cotransporter on the basolateral surface. Now, the proximal tubule is also responsible for reabsorbing glucose, as well as amino acids, sodium, chloride, potassium, phosphate, water and uric acid.

Okay, so now let’s look at the distal tubule and collecting duct which are affected in type I and type IV RTA. First, they are lined with alpha-intercalated cells which also move bicarbonate and hydrogen from the tubule into the cell with the help of carbonic anhydrase. The alpha intercalated cells also secrete hydrogen across the apical surface and into the tubule with the help of a hydrogen ATPase and a potassium hydrogen ATPase. Once in the lumen, hydrogen binds to phosphate or ammonia to form relatively weak acids like dihydrogen phosphate or ammonium, which then get peed out in the urine. This allows protons to get removed without making the urine too acidic and damaging the cells lining the tubules and the rest of the urinary tract.

The other group of cells in these regions are the principal cells.These cells have a potassium channel that allows potassium into the lumen, and an epithelial sodium channel that allows sodium into the cell. The flow of positively charged sodium ions into cell helps drive the positively charged potassium ions out of the cell against their concentration gradient. There’s also a Na/K ATPase pump on the basolateral surface that again moves 2 potassium ions in for every 3 sodium ions out. All three of these channels are stimulated by aldosterone, and the combined effect is resorption of sodium and loss of potassium.