A 1-day-old boy is brought to the intensive care unit from the nursery due to increased work of breathing. The patient was born at 31 weeks to a mother with a history of multiple preterm deliveries, polysubstance abuse and HIV. His temperature is 38°C (100.4°F), pulse is 215/min, respirations are 76/min, blood pressure is 60/41 mmHg, and oxygen saturation is 85% on room air. Physical exam shows tachypnea, nasal flaring, and subcostal retractions. Administration of supplemental oxygen and positive pressure ventilation improve the patient's oxygen saturation to 95%. Blood glucose is 95 mg/dL. Chest x-ray and laboratory results are shown below:

Which of the following best describes the etiology of this infant’s disease process?
Memory Anchors and Partner Content 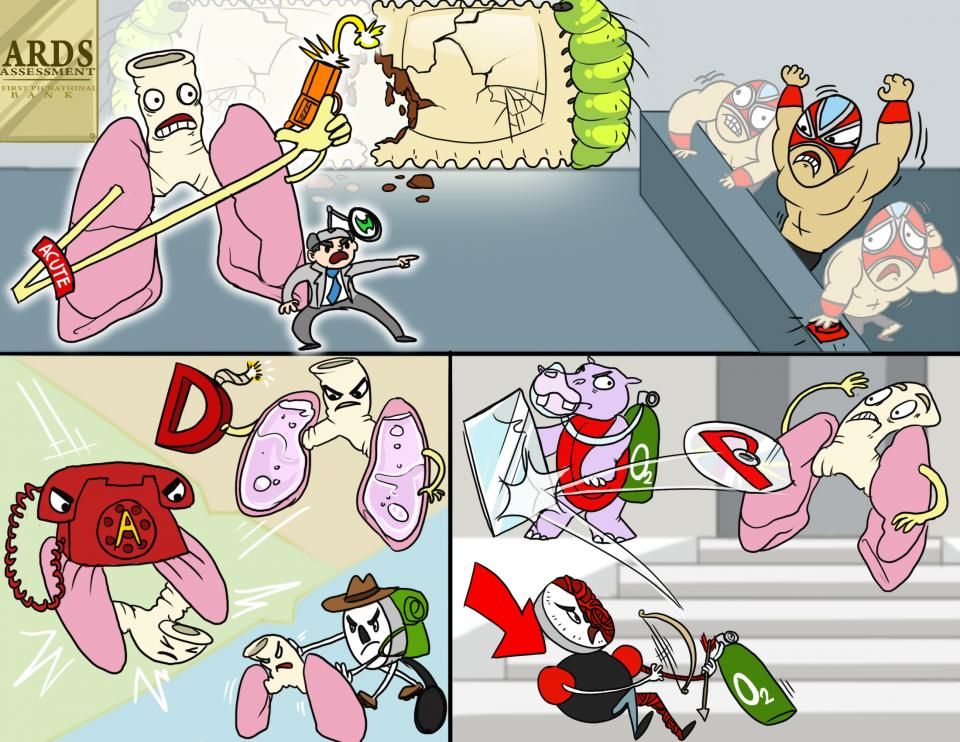 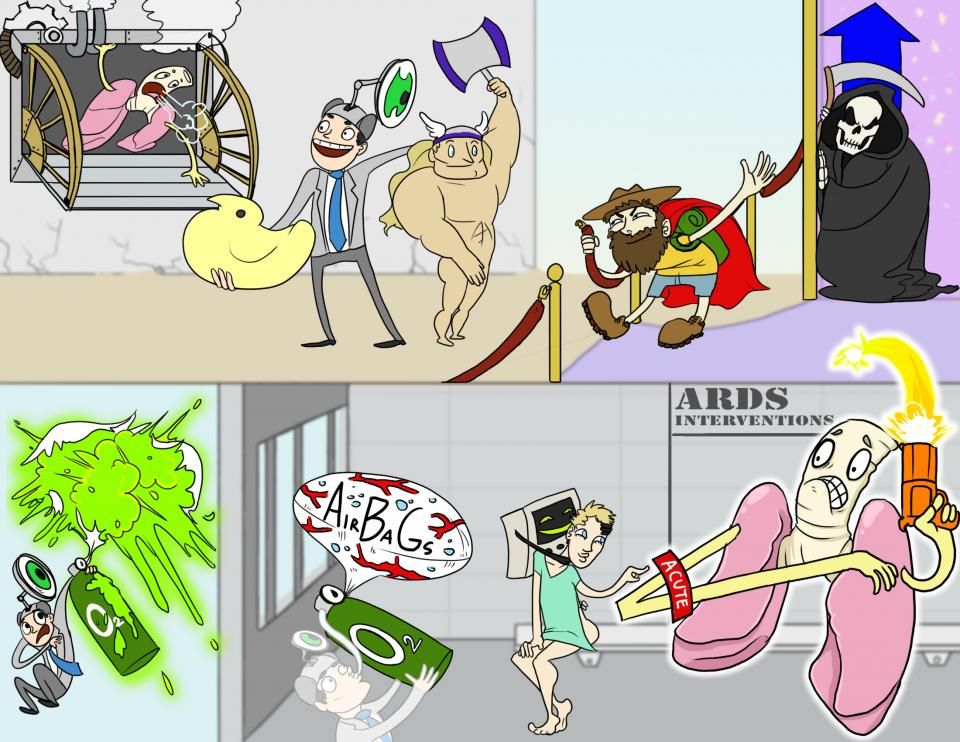 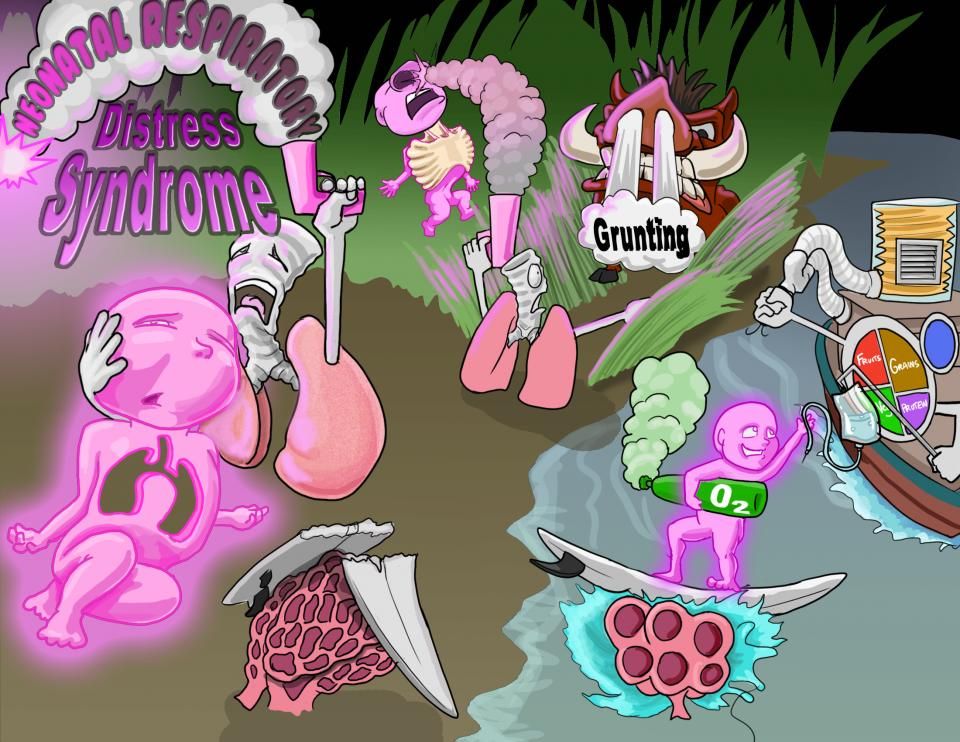 Two people are admitted to the emergency department.

Mike, a 55-year-old man, presents with shortness of breath, high fever, and cough.

A chest x-ray was ordered and it showed a right lower lobe infiltrate, which is suggestive of pneumonia.

He was then started on IV antibiotics but the following day Mike became hypoxic and hypotensive.

Because his hypotension didn’t improve despite intubation, IV fluids, and vasopressors, he is diagnosed with septic shock.

Then there was Dona, an infant delivered by cesarean section at 36 weeks’ gestational age, with an Apgar score of 9 at birth.

A few hours after delivery, she develops tachypnea, chest wall retractions with nasal flaring, and tachycardia.

Aside from increased work of breathing, her physical examination findings are normal.

A chest x-ray was ordered and it showed diffuse reticulogranular ground glass appearance with air bronchograms.

Now, both people are in respiratory distress.

Normally, when you breathe in, the air reaches the alveoli, which are made up of two types of pneumocytes.

First, type I pneumocytes are thin, and have a large surface area that that facilitate gas exchange.

More important for the exams are the type II pneumocytes, which are smaller, thicker and have the ability to proliferate in response to lung injury.

They are in charge of making a fluid called surfactant which contains various phospholipids.

This lets it act like droplets of oil that coats the inside of the alveoli, decreasing surface tension, so if it’s missing, the alveoli will collapse.

These cells also act like stem cells, meaning they can give rise to type I cells and type II pneumocytes.

Ok so acute respiratory distress syndrome, or ARDS, is characterized by rapid onset of widespread inflammation in the lungs which can lead to respiratory failure.

ARDS is not a primary disease, as it is usually triggered by conditions like sepsis, aspiration, trauma, and pancreatitis.

Now ARDS starts when these conditions cause alveolar damage, and a high yield fact is that the injury triggers the pneumocytes to secrete inflammatory cytokines like TNF-alpha and interleukin 1.

This subsequently leads to neutrophil recruitment, and they will release toxic mediators, like reactive oxygen species and proteases, which will damage the lungs even more.

You’ll need to know that the main site of injury is the alveolar-capillary membrane, which becomes more permeable, causing fluid to move into the alveoli resulting in pulmonary edema.

This fluid can impair gas exchange, leading to hypoxemia.

Furthermore, the edema can also wash away the surfactant coating the alveoli to the point where it can’t reduce surface tension anymore, and as a result, the alveoli collapse.

And finally, dead cells and protein-rich fluid start to pile up in the alveolar space and, over time, it forms these waxy hyaline membranes which look like a layer of glassy material.

Individuals with ARDS present with serious symptoms and signs that require urgent investigation.

More often than not, ARDS will lead to shock due to hypotension.

The excess fluid in the lungs can cause a crackling sound called rales during auscultation, which is the sound of collapsed alveoli popping open with inspiration.

Keep in mind additional symptoms might provide clues to the underlying cause.

For example, epigastric abdominal pain radiating to the back along with a history of gallstones indicate acute pancreatitis.

Diagnosis of ARDS is typically made when the individual presents all of the next four criteria, which you should definitely remember for your exams.

First, the symptoms have to be “acute” meaning an onset of one week or less.

Second, and particularly high yield, a chest X-Ray or CT scan shows opacities or “white out” in both lungs, which is due to pulmonary edema.

In ARDS, gas exchange is defective so the PF ratio is below 300 mmHg, and the lower this ratio gets, the more severe the condition.

Fourth, the respiratory distress must not be due to cardiac causes, like heart failure.

Another clue is the pulmonary capillary wedge pressure, which is measured by inserting a catheter into a small pulmonary arterial branch.

In heart failure, this is elevated because more blood remains in the left side of the heart and it prevents pulmonary venous return.

The blood backs up into the pulmonary vessels, and the increase in pressure pushes fluid into the interstitium of the lungs, resulting in edema.

In ARDS, the pressure is normal since the edema is caused by leaky capillaries instead of increased pressure.

Treatment of ARDS ultimately comes down to treating the condition that triggered it.

However, the most important initial step is supportive care, like supplemental oxygen or mechanical ventilation.

A high yield fact to remember is that it’s vital to maintain positive end-expiratory pressure, which is where the pressure in the lungs is kept slightly above atmospheric pressure, even after exhalation, because this prevents the alveoli from collapsing.

It’s also good to have low tidal volumes to prevent over-inflation of the damaged alveoli.

Another important thing to watch out for is positive pressure ventilation can cause compression of pulmonary vessels which leads to pulmonary hypertension decreased pulmonary venous return.

This will reduce cardiac output and hypotension might worsen.