The treatment for severe warfarin overdose is along with vitamin K.

A previously healthy, breast-fed, 4-week-old girl presents to the emergency department with blood in her diaper and difficulty feeding. She was born full term to a healthy gravida 2, para 1 24 year-old-woman who received standard prenatal care. Physical exam shows a lethargic infant with widespread bruising. Her muscle tone is decreased on the right. Her vital signs are normal. The parents decided to take a natural approach and have a home birth. They refused routine injections. Complete blood count indicates normocytic anemia. Other studies are pending. The patient's condition is most likely due which of the following? 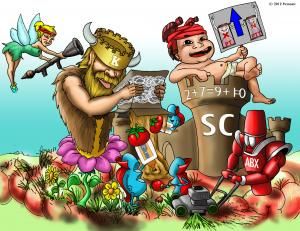 Vitamin K helps to regulate the process of blood coagulation by assisting in the conversion certain coagulation factors into their mature forms.

Without vitamin K, our bodies would be unable to control clot formation.

Imagine being unable to form blood clots effectively--that would mean that we would lose all of our blood volume from something as simple as a pinprick!

To prevent this extreme scenario - vitamin K must be ingested, metabolized, and utilized to create mature coagulation factors.

Now, to understand the regulation of clot formation, we first need to talk briefly about hemostasis--hemo referring to blood, and stasis meaning to halt or stop.

To get to fibrin, a set of coagulation factors, each of which are enzymes, need to be activated.

These enzymes are activated via a process called proteolysis- which is where a portion of the protein is clipped off.

Vitamin K is found in abundance in green leafy foods—things like spinach, kale, and chard which all have high concentrations of vitamin K.

It’s a fat-soluble vitamin, along with vitamins A, D, and E, meaning that it can be stored in fat cells instead of being excreted by the kidneys.

Vitamin K is also synthesized by bacteria in our gastrointestinal tract as a byproduct of their metabolism, which further contributes to overall intake.

Now, when vitamin K is mobilized from fat cells or the digestive tract to the liver, it’s in its dietary form and it’s called vitamin K quinone.

Gamma glutamyl carboxylase adds a carboxyl group, a chemical group made up of one carbon, two hydrogens, and one oxygen, onto the end of glutamic acid residues on the proteins.