A 40-year-old woman and her 20-year-old son are brought to the physician by the woman’s sister. For the last two years, the mother has been accusing her neighbors of using black magic on her and her son to harm them. She has frequently gotten into verbal fights with them, and she has cut off all social contact with anyone in the neighborhood. She currently tries to avoid going outside her house to avoid contact with them. The son tells the physician that he recently started to understand that his neighbors will indeed harm them with black magic if they aren’t careful, and he has entered into verbal and physical altercations to protect himself and his mother “against their dark powers.” Over the past two months, he has spent most of his time in the house with his mother. In the office, the mother is poorly-groomed, irritable, and appears to be listening and responding to voices. The son is also irritable and becomes agitated when asked further questions. Which of the following is the most likely diagnosis? 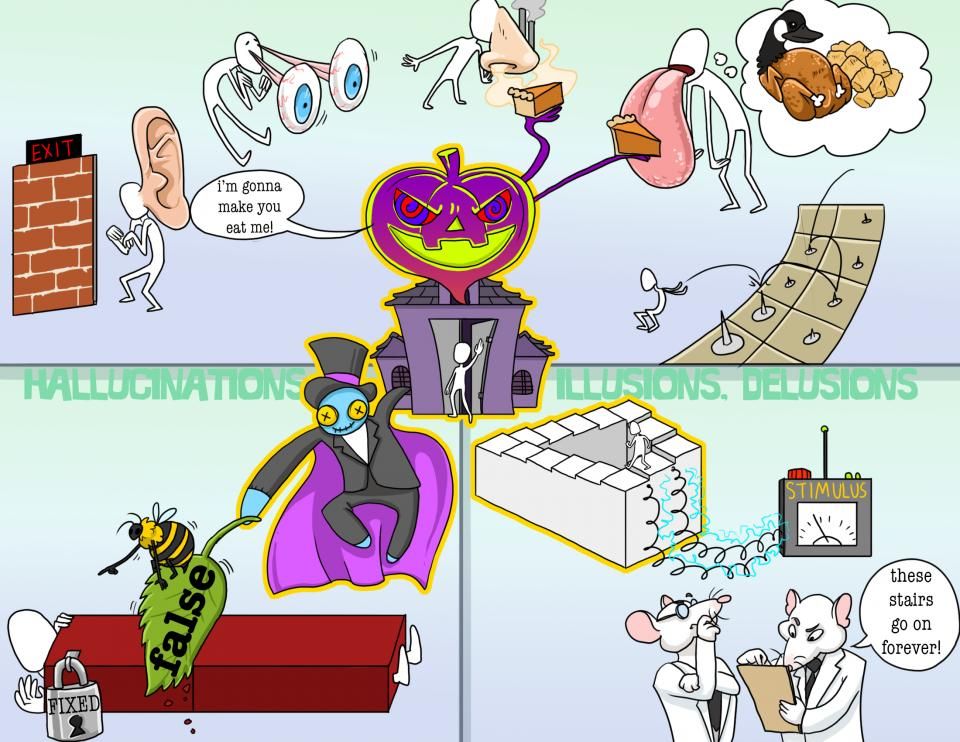 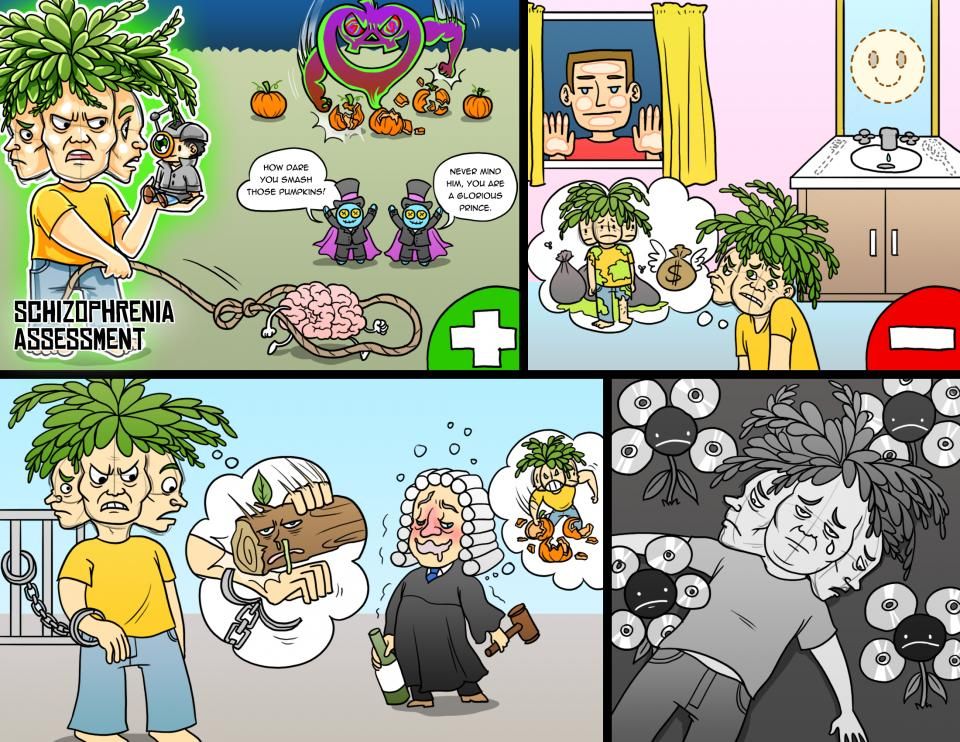 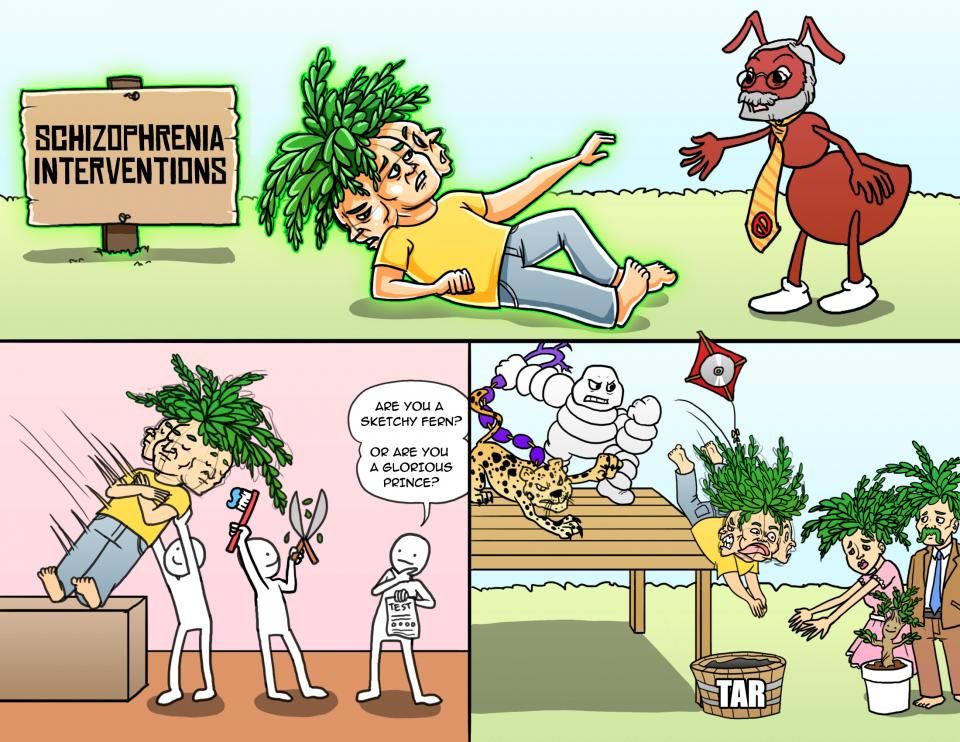 A 32 year old male named Bert is brought to the psychiatric clinic by his concerned mother, who thinks that Bert’s behavior has changed over the past 9 months. Upon further questioning, Bert’s mother reveals that he has been isolating himself, and stopped calling or visiting his family and friends. Bert says that he must stay at home because some aliens have been trying to control his mind. On physical examination, Bert appears disheveled, has poor eye contact with others, and shows little facial expression. You decide to order a toxicology screen, which comes back negative.

Some days later, you see a 25 year old female named Akuchi, who comes in for a psychiatric consultation. The first thing you notice is that she’s wearing a long coat and a sweater with a mini skirt and flips flops. Akuchi mentions that she has always had trouble fitting in and does not have any friends, even though she’d really like to. When you ask what she does during her free time, Akuchi tells you that she spends most of her time in her room, since she’s convinced that there are vampires hiding in her house, although she’s never seen or heard one. On physical examination, Akuchi’s speech seems peculiar, since she creates new versions of words and often doesn’t make sense.

Okay, based on the initial presentation, both Bert and Akuchi seem to have some form of schizophrenia spectrum disorder. These are a group of conditions, including schizophrenia, that are characterized by difficulty thinking clearly, making good decisions, distinguishing reality from imagination, and behaving appropriately, sometimes even to the point where they interfere with day-to-day activities like working, studying, eating, and sleeping. Now, the main risk factors for developing a schizophrenia spectrum disorder seem to include having a family history, experiencing a personal trauma, or heavy use of substances, and especially cannabis, during adolescence. And that’s actually high yield!

However, the underlying cause is poorly understood; for your exams, what you need to remember is that it’s related to altered levels of the neurotransmitter dopamine that affect two out of the four dopamine pathways in the brain: the mesocortical pathway, which helps regulate emotions, and the mesolimbic pathway, which controls motivation and desire. Bear in mind that these disorders don’t affect the two other dopamine pathways, meaning the nigrostriatal pathway, which contains motor neurons that bypass the medullary pyramids, to control involuntary movements and coordination; and the tuberoinfundibular pathway, which releases dopamine to limit the secretion of prolactin.

Now, positive psychotic symptoms are those that occur “in addition” to normal experiences. Things that really shouldn’t exist, like adding pineapple to your pizza. Remember that these positive symptoms usually result from high levels of dopamine in the mesolimbic pathway, and they consist of delusions, hallucinations, disorganized speech, disorganized or catatonic behavior, and disorganized or abnormal motor behavior.

Delusions are false beliefs that the person might feel very strongly about, so much so that they won’t change their mind, even if you give them evidence against it. And these need to be at odds with the person’s cultural or religious beliefs. For your exams, remember that there are several subtypes of delusions, including persecutory delusions, which are when individuals falsely believe they are going to be harmed or harassed by other forces, people, or organizations. Delusions of reference consist of beliefs that random or innocuous events or gestures and comments from strangers are aimed directly at them, like a person believing that a television news anchor is secretly sending messages directly to them. There are also grandiose delusions, which is when individuals believe they have exceptional abilities like superpowers, wealth, or fame; erotomanic delusions, where people may falsely believe that another person is in love with them; and jealous delusions, for instance where individuals believe that their partner is unfaithful.

Another positive symptom is disorganized speech, and it’s when individuals hop from one conversation topic to another with no connection or loose associations. Sometimes, the speech is so severely disorganized that it is nearly incomprehensible, which seems like just a random jumbling of disconnected words, like “pencil dog hat coffee blue” and that’s often called a "word salad."

Grossly disorganized or abnormal motor behavior is the last positive symptom, and it refers to unusual, bizarre, or silly behavior that’s out of context and doesn’t seem to have much of a purpose, like for example wearing multiple layers of jackets on a hot summer day, or engaging in repeated purposeless movements or postures. One extreme is catatonic behavior, where the individual becomes very unreactive to their environment. So like they might be in an unresponsive stupor, or be super resistant to moving and maintain a bizarre body posture like a twisted limb.

Moving on, negative psychotic symptoms represent the absence of normal behavior and are caused by low levels of dopamine in the mesocortical pathway. The most characteristic one is flat affect, which basically means that there’s diminished emotional expression. Flat affect can manifest as decreased facial expressions like smiling or frowning, and reduced eye contact, as well as decreased speech intonation, and a decrease in limb movements that normally help give emotional emphasis to speech. This can be associated with alogia, which means poverty of speech, so when a person chooses not to speak or uses very few words. For instance, when asked “do you have any children?”, they might just respond with a brief and concrete “yes”, instead of a more spontaneous “yes, one girl and two boys”. Other examples of negative symptoms include avolition, which is when individuals show decreased motivation or interest in activities like get-togethers, hobbies, or work; as well as asociality, which refers to decreased interest in social interactions, and anhedonia, which is decreased enjoyment from pleasurable activities.

Okay, then! Let’s start with schizophrenia. This is the most common of these disorders and affects roughly 1.5% of the general population over a lifetime, with males being more commonly affected than females. Another thing to note is that it tends to present earlier in males, typically in late adolescence to early 20s, while in females it most commonly shows up in the late 20s to early 30s.