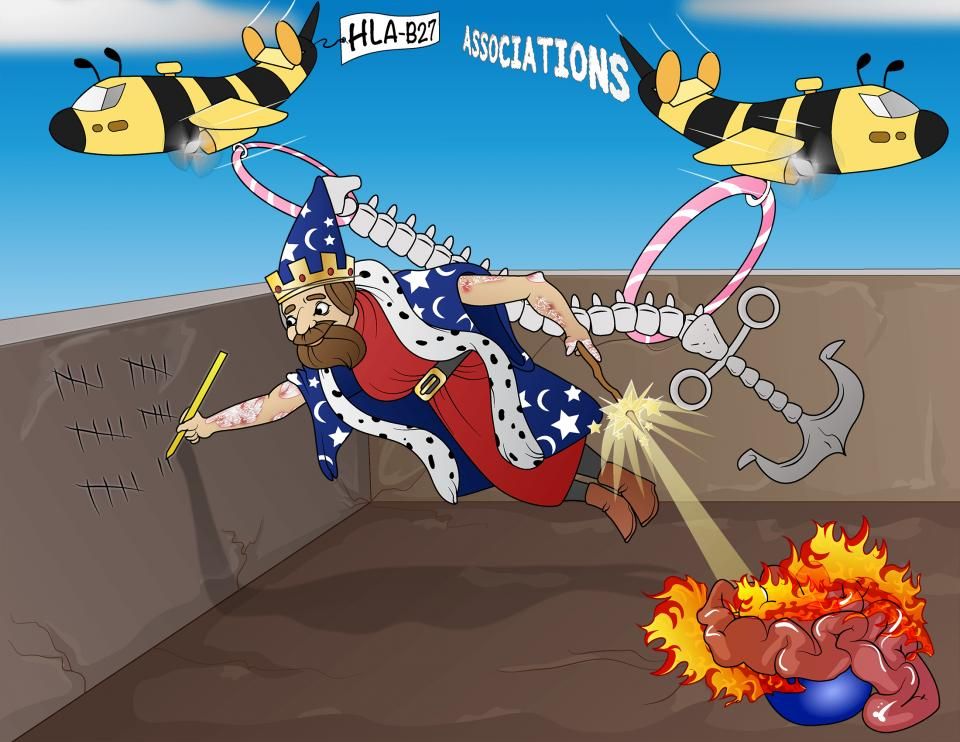 Let’s start with psoriatic arthritis, which occurs in some individuals with psoriasis or with a family history of psoriasis. It is an autoimmune disease characterized by joint inflammation. Exactly what causes the immune system to go haywire and attack the joints is unclear. Although the HLA-B27 gene is linked to the disease, it’s not enough to trigger psoriatic arthritis on its own, and environmental factors like physical trauma or an infection seem to play a role as well. Now, it all starts with psoriasis, which is an autoimmune condition where skin self antigens are seen as foreign. When that happens, T cells start releasing cytokines that recruit and activate other immune cells to release TNF, IL-12, and IL-23. This triggers keratinocytes and fibroblasts to proliferate, which leads to the formation of psoriatic plaques. These are red, raised patches with silvery scales made up of dead skin cells. In some individuals with psoriasis, T cells also go to the joints and trigger the activation of osteoblasts and osteoclasts, leading to joint erosion and ossification, which can ultimately cause arthritis and severe deformities. Now, arthritis usually occurs after the psoriatic plaques have appeared, but it can sometimes precede them, which makes diagnosis that much harder. For your exam, it’s important to note that less than 30% of individuals with psoriasis develop psoriatic arthritis.

Symptoms of psoriatic arthritis typically include pain, swelling, and stiffness of the affected joints. There are several types of psoriatic arthritis, depending on which joint is affected. The most common one is the distal interphalangeal predominant type, which generally affects the joints nearest to the ends of the fingers and toes, leading to dactylitis, which is the inflammation of the fingers, also known as sausage fingers and nail abnormalities like ridging or pitting. Over time, some individuals with distal interphalangeal predominant type can also develop severe bone erosions and <a href="/answers/felon-fing