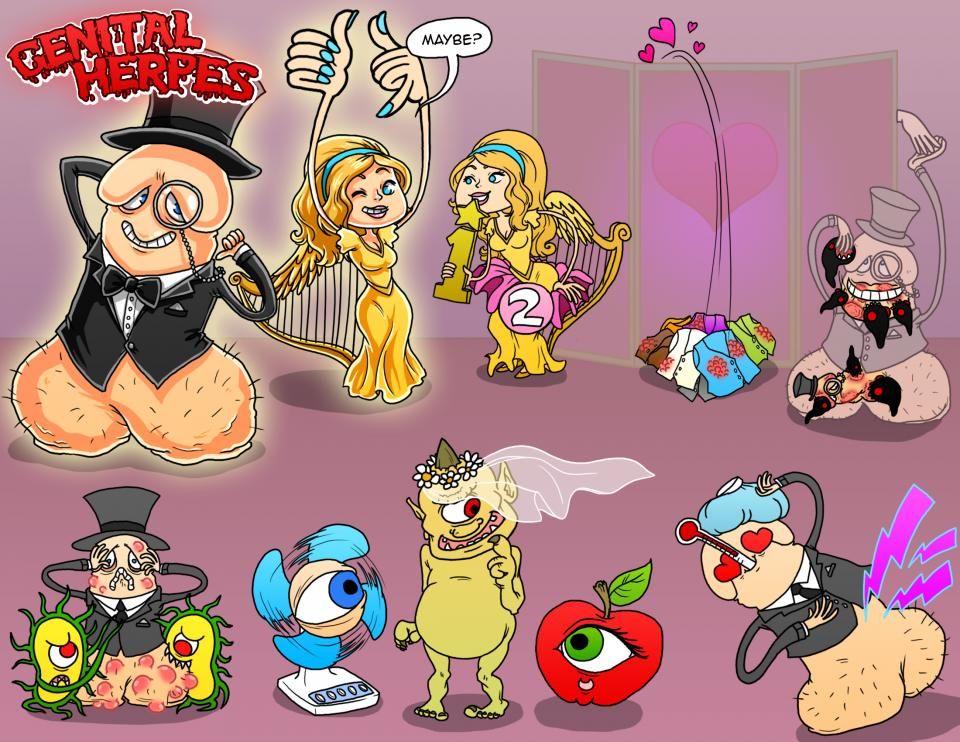 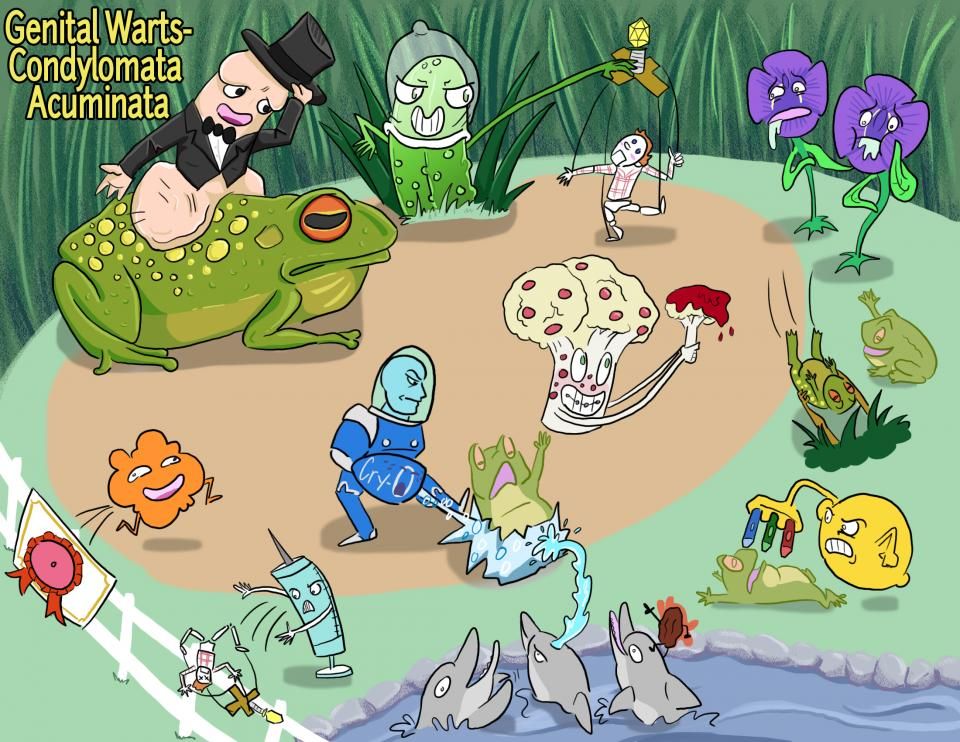 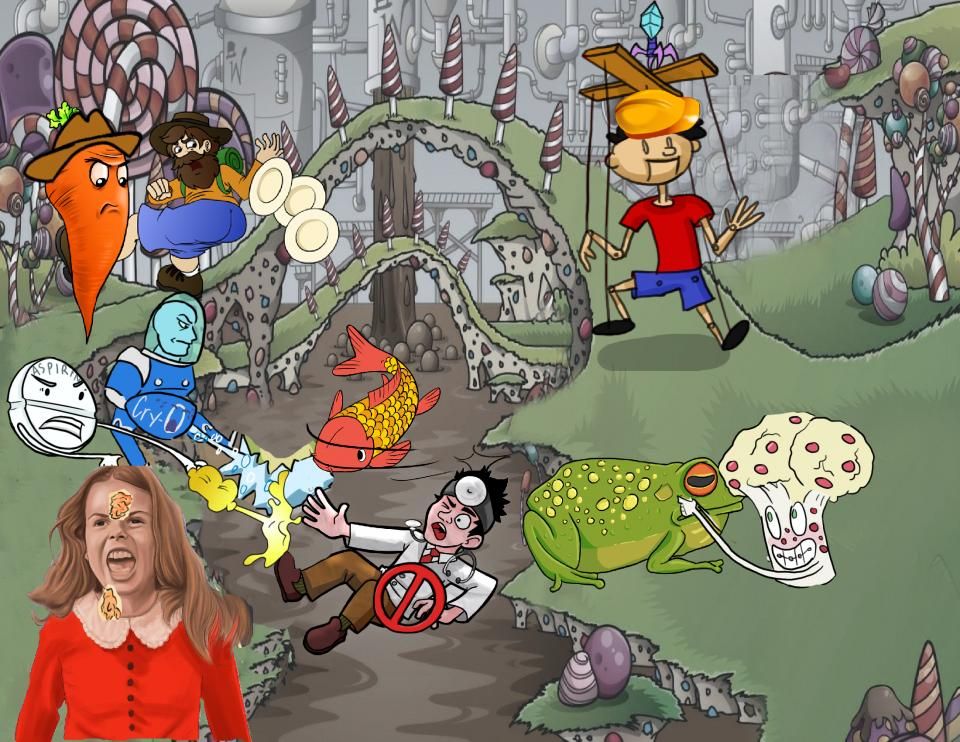 A 35 year old female named Rae comes to the clinic one day with complaints of multiple verrucous skin lesions that have appeared over the anogenital region. Upon further questioning, Rae tells you that her husband also developed the same lesions over the same region a few weeks ago, but hasn’t seeked medical attention. On physical examination, you notice that the skin lesions are soft and flesh-colored, and have a unique cauliflower-like appearance. You decide to perform a biopsy of the lesion, which reveals the presence of multiple vacuolated epithelial cells with enlarged, irregular nuclei.

A few days later, a 30 year old male named Mark comes to the clinic concerned about a painful ulcer that recently developed in his genital region. Upon further questioning, he mentions that he’s sexually active, but doesn’t always use protection. On examination of the genital region, you notice that the ulcer is covered by exudate; in addition, Mark has inguinal lymphadenopathy, which is tender. You obtain a sample of the exudate and order a gram staining, which shows gram-negative, rod-shaped bacteria arranged in parallel strands.

Now, based on the initial presentation, Rae has warts, while Mark has ulcers, and both cases seem to be caused by a sexually transmitted infection, or STI for short.

STIs are mainly transmitted from person to person during sexual contact through body fluids, such as vaginal secretions, semen, or blood. The ones most at risk of contracting an STI are sexually active individuals, particularly those who have unprotected sex or multiple sexual partners. But, it’s important to note that sexually transmitted infections can also be transmitted via contact with skin or mucous membranes, including eyes, mouth, throat, and anus. And that’s a high yield fact!

Now, a common STI that may cause warts, called condylomata acuminata, is caused by human papillomavirus, or HPV.

All right, let’s begin with condylomata acuminata, which are anogenital warts, or verrucae. Now, condylomata acuminata are caused by the human papillomavirus, or HPV. As a side note, remember that there are over 100 different serotypes of HPV, among which serotypes 16 and 18 have a high risk of transforming into malignant lesions or cancers of the cervix, vagina, vulva, penis, anus, and oropharynx.

In contrast, condylomata acuminata are caused by low risk HPV serotypes 6 and 11, so they are benign lesions. In a test question, look for lesions that’s soft, flesh-colored, and have a cauliflower-like look to their surface. Though they are typically painless, they can cause itching or bleeding.

For diagnosis, a high yield finding upon biopsy is koilocytosis, which refers to the presence of multiple vacuolated epithelial cells with enlarged, irregular nuclei.

Treatment of condylomata acuminata involves removal with topical medications like imiquimod, or techniques like cryotherapy or surgical excision.

Next up, genital herpes infection is caused by the herpes simplex virus, primarily by serotype 2, or HSV-2, and sometimes serotype 1, or HSV-1. HSV is most often transmitted through direct contact with active herpes lesions, but can also be transmitted through saliva or genital secretions of infected individuals.

When a person gets infected by HSV-2, at first it enters the skin cells, where it starts replicating. As a result, individuals develop painful and itchy vesicles and ulcers over the genital area. In addition, there can be tender inguinal lymphadenopathy, as well as systemic symptoms like fever, headache, and myalgia.

HSV-2 can also infect nearby neurons, and travel up their axon to the neuron’s cell body, where it remains latent. So that’s ultimately where the virus settles in for life! For your exams, remember that HSV-2 typically remains latent in the sacral ganglia. From time to time, the virus can reactivate and travel back down the axon to the skin cells. As a result, infected individuals can develop genital vesicles and ulcers over and over again throughout their lifetime, with classic triggers including stress, skin damage, and other viral illnesses.

Keep in mind that genital herpes during pregnancy can spread to the fetus through the placenta, or during childbirth, when the baby passes through infected vaginal secretions. Neonatal herpes presents with the characteristic vesicular skin lesions, which mainly involve the scalp, the eyelid margins, and the oral mucosa; but can also lead to meningoencephalitis, or inflammation of the meninges and the brain.

Now, diagnosis of HSV infection can be made by collecting a sample from a skin lesion, and performing a viral culture or a PCR. In addition, a Tzanck smear can be done, which shows multinucleated giant cells with intranuclear inclusion bodies known as Cowdry A bodies. Finally, serology can help identify anti-HSV antibodies.

Although genital herpes typically resolves without treatment within a couple of weeks, treatment with antiviral medications like valacyclovir or acyclovir can help reduce pain and speed up healing.

Another common STI that causes ulcers is syphilis, which is caused by the spirochete Treponema pallidum. Now, syphilis is a progressive disease that has three stages. The first stage is called primary syphilis or early localized stage, and it’s characterized by the presence of a solitary, painless genital ulcer called chancre, which has a hard base, raised borders, and is usually covered by an exudate that’s rich in spirochetes. Generally, the chancre can appear anytime within 3 weeks from the initial infection, and typically heals on its own without any treatment within 3 to 6 weeks. However, during that time, some spirochetes manage to disseminate into the bloodstream.

This dissemination leads to the second stage, called secondary syphilis, or the dissemination stage, which can occur about 2 to 10 weeks after the initial infection. Secondary syphilis may present with constitutional symptoms, such as fever, headache, and malaise, as well as generalized lymphadenopathy and patchy hair loss. But what’s really important to note is that secondary syphilis is characterized by a non-itchy maculopapular rash, with small bumps that start on the trunk and spread out to the arms and legs, including the palms and soles, and eventually to the genitalia, and other mucous membranes. Another typical finding in secondary syphilis is condylomata lata, which are smooth, white, painless, wart-like lesions over moist areas like the genitals, the anal region, and the armpits. Be sure you don’t get these mixed up with condylomata acuminata caused by HPV!

Now, secondary syphilis usually resolves within a few weeks to months. At this point, the disease enters a dormant stage called latent syphilis, which can last from 1 year up to even 20 years! During the latent stage, individuals are typically asymptomatic, but may still be contagious.

Eventually, individuals who don’t get any treatment can progress into the final stage of syphilis, which is called tertiary syphilis. Here, the immune cells start to huddle around and form characteristic granulomatous lesions called gummas. Often, funnily enough, there aren’t any spirochetes at all in these lesions.

In addition to gummas, various organs get damaged during tertiary syphilis, but for your exams, the most important ones to remember are the heart and blood vessels leading to cardiovascular syphilis, as well as the brain and spinal cord leading to neurosyphilis. Now, in cardiovascular syphilis, there’s damage to the vasa vasorum, which are the blood vessels that supply the aortic wall. This leads to syphilitic aortitis, or inflammation of the aortic wall, which can result in complications like aortic aneurysms.

On the other hand, neurosyphilis presents with symptoms of meningitis, such as a fever, headache, and neck stiffness. Over time, neurosyphilis can lead to altered mood and behavior, as well as confusion and dementia. Additionally, neurosyphilis can cause slow and progressive degeneration of the spinal column, leading to a loss of the sensations of pressure, fine touch, vibrations, and proprioception. This is also known as “tabes dorsalis”. For your test, you need to know that without the sensations of vibration and proprioception, the individual will often lose coordination, and experience difficulty walking. As a result, they may present with wide-based ataxia, meaning that they stand or walk with their feet spaced widely apart.

Another telltale finding is a positive Romberg sign which means that they can’t maintain balance with their eyes closed. Neurosyphilis can also result in general paresis, weakness, or sometimes even paralysis, mostly in the legs. Finally, neurosyphilis can affect the eye, causing an Argyll Robertson pupil. This means the pupils lose their light reflex, so they do not constrict when exposed to light, but they still have their accommodation reflex, so they do constrict when focusing on an object that is close by.

Now, keep in mind that syphilis can also be passed during pregnancy to the fetus, causing congenital syphilis. This often results in hydrops fetalis, which is when the fetus has an abnormal accumulation of fluid in soft tissues. This poses a great risk for stillbirth, which is when the fetus dies within the womb. Babies who survive the pregnancy typically develop some characteristic features, such as frontal bossing, a saddle nose, and a short maxilla.