A 25-year-old woman, gravida 1, para 1, is brought to the obstetrics and gynecology clinic because of fatigue, amenorrhea, and agalactorrhea. These symptoms have been present for the past 7 months since the birth of her child was complicated by a postpartum hemorrhage, requiring multiple blood transfusions. Which of the following is the most likely explanation for the patient's symptoms? 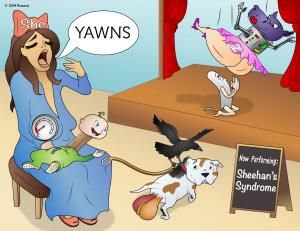 Sheehan’s syndrome, is also sometimes called postpartum pituitary gland necrosis, and we can break that down.

Postpartum refers to the time after a mother gives birth to an infant, pituitary gland refers to a tiny gland that is at the base of the brain, and necrosis refers to death.

So, postpartum pituitary gland necrosis is a disorder where cells in a pituitary gland of a new mother start to die - most commonly because excess blood loss during childbirth leaves those cells without adequate blood flow. It is a rare type of pituitary apoplexy.

During pregnancy, a group of cells in the pituitary gland called lactotrophs start to increase in size and number.

These lactotrophs secrete the hormone prolactin, and the increased levels of prolactin prepares the mammary glands to produce milk.

Even though there are more lactotrophs that are larger and more metabolically active, the blood supply to the pituitary gland remains the same.

So there is an increased demand without an increase in supply, means the lactotrophs are hypoperfused.

In other words, the lactotrophs are just barely getting by, and if they get any less blood, than they face ischemic injury and necrosis or death.

What’s even more alarming is that since there are more metabolically active lactotrophs around, they take up a larger proportion of the blood that supplies the pituitary, increasing the risk of ischemia in other cells of the pituitary gland as well.

During the delivery of an infant, excessive blood loss is called postpartum hemorrhage.

Postpartum hemorrhage is generally defined as losing more than 500ml of blood after a vaginal delivery or more than 1000ml after a cesarean section delivery.

When this happens, there’s less blood flowing to the cells in the pituitary gland, and that tips them over - resulting in ischemic necrosis.

If the blood flow isn't restored soon enough, more and more tissue dies, and the pituitary gland progressively shrinks, becomes scarred, and stops producing enough of one or more of the hormones.

In severe cases, severe destruction and scarring can lead to an empty sella turcica which is the spot in the brain where the pituitary gland usually sits.

Increased cell death within the pituitary also means that a number of hormone levels start to fall.