An 84-year-old man comes to the office for examination of his skin to detect pre-malignant or malignant lesions. Past medical history is noncontributory. He reports smoking about a half-pack of cigarrettes for the past 60 years. Physical examination shows furrowed, yellowed skin around his eyes and on his forehead. A punch biopsy is performed. Which of the following features would most likely be found on histologic examination? 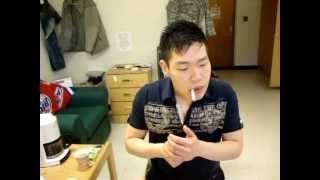 There are over a billion people who smoke tobacco around the world, which makes it one of the most popular psychoactive substances used in society.

The majority of tobacco users smoke cigarettes, but some smoke cigars or pipes, chew tobacco, or practice snuffing, which is where ground-up tobacco leaves are pushed up the nose.

Given the popularity of tobacco as well as its negative health consequences, it’s considered one of the leading causes of preventable death and disease worldwide.

These toxins cause endothelial cell damage which creates inflammation along the inner lining of arteries.

The inflammation increases the risk of having a myocardial infarction (or heart attack), a stroke, and peripheral vascular disease which causes severe pain in the lower legs.

The toxins in cigarette smoke can also cause pulmonary problems when they’re deposited into the lungs, as they damage the lung tissue and increase the likelihood of developing a lung infection.

Finally, cigarette smoke contains many different carcinogens including ammonia, formaldehyde, and carbon monoxide, all of which are associated with cancers of the mouth, throat, lung, bladder, pancreas, and uterus.

Combining these effects, a heavy smoker who smokes two packs of cigarettes each day for 20 years loses about 14 years of life.

Despite the negative consequences of smoking, most people continue to smoke because tobacco contains nicotine, a tiny, fat-soluble molecule that creates pleasurable psychoactive effects and is extremely addictive.

When a cigarette is lit, some of the nicotine is destroyed by the heat, and some gets into the smoke that’s then inhaled.

As a result, smokers are able to “self-titrate” their nicotine dose by inhaling more frequently, more deeply, or for a longer amount of time.

In the central nervous system, nicotinic receptors are on pre-synaptic axon terminals of neurons, and when nicotine binds to them, it triggers the release of neurotransmitters like dopamine, acetylcholine, and glutamate, which is why it’s considered an acetylcholine agonist.

The psychoactive effects of nicotine are related to the locations of nicotinic receptors in the brain and the exact neurotransmitters that are released when those receptors are stimulated.

For example, increased dopamine in the mesolimbic system (a reward pathway composed of the ventral tegmentum and the nucleus accumbens) causes pleasure, improved attention span and mental processing, as well as increases in working memory.

Nicotine also decreases the activity of inhibitory GABA neurons in the ventral tegmentum, so by inhibiting the inhibitory neurons there’s a double negative, meaning this is one more way to produce an increase in dopamine levels.

Over time, individuals who consistently use cigarettes can develop tolerance to the effects of nicotine.

This means that with repeated use, they have a reduced response to nicotine, and therefore an increased dose of nicotine is needed to achieve the original response.

On a cellular level, there are a couple theories that explain why this might happen.

One is that repeated exposure to nicotine may cause nicotinic receptors to become less sensitive to nicotine.

Another theory is that neurons may remove nicotinic receptors from the cell wall in a process called down-regulation, leaving fewer receptors available for binding.

In either scenario, tolerance leads to the need for higher and higher doses of nicotine over time.

Let’s step back for a moment and say that you’re at rest, without anything stimulating your reward pathway.

In this situation, your brain keeps your heart rate, blood pressure and wakefulness in a normal state called homeostasis.

Now, let’s say that your secret crush sends you a text. All of a sudden you may feel sweaty and flushed, your heart rate may jump a bit.