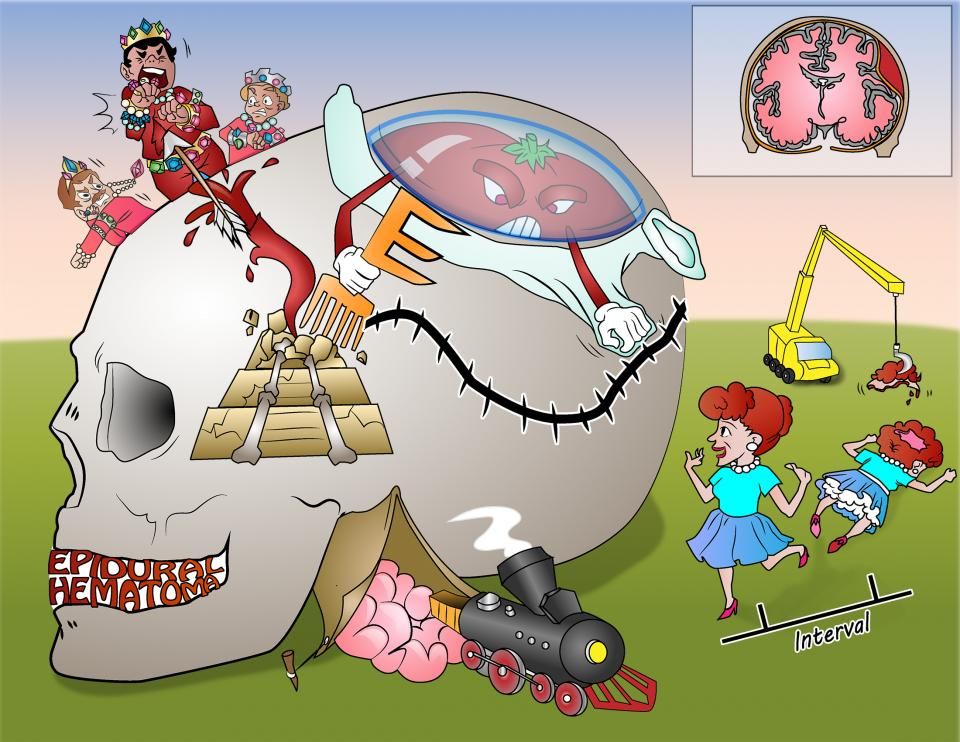 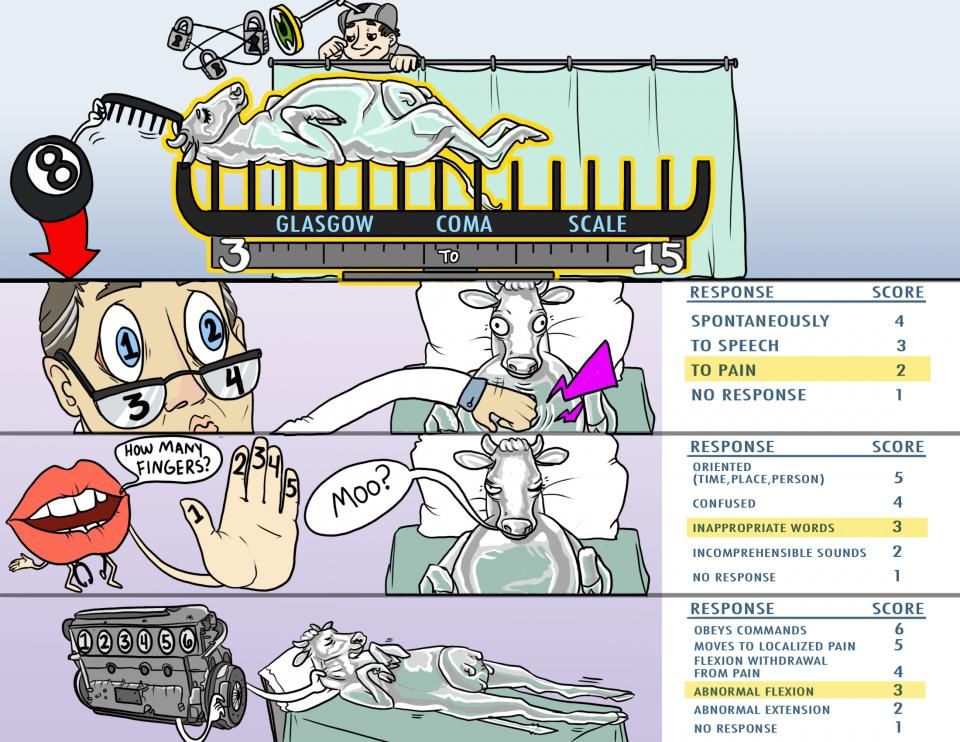 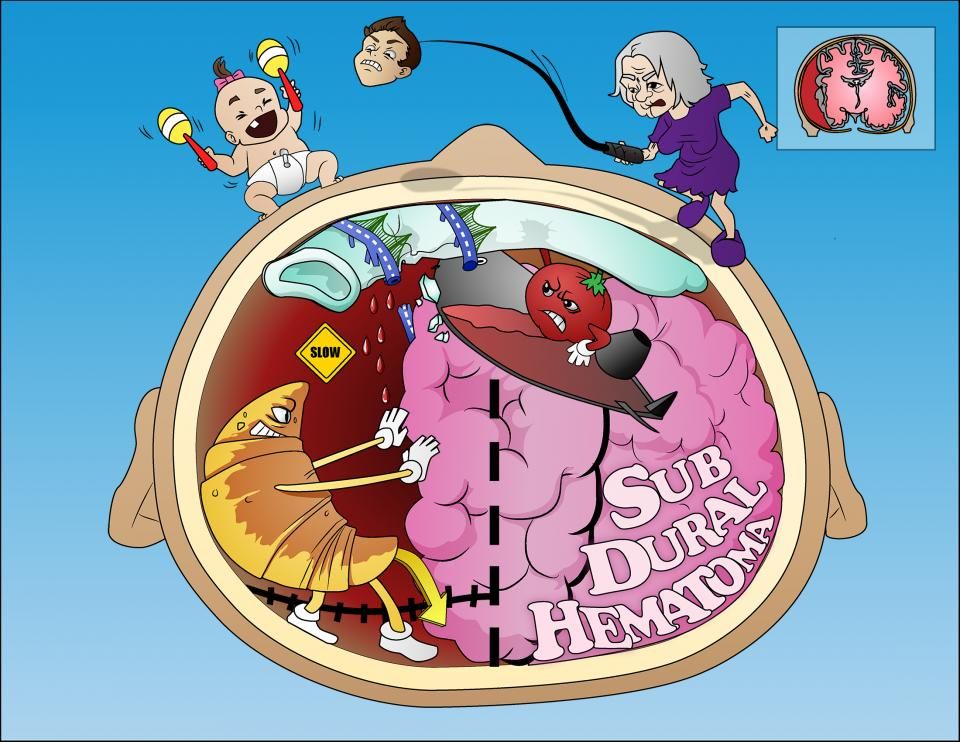 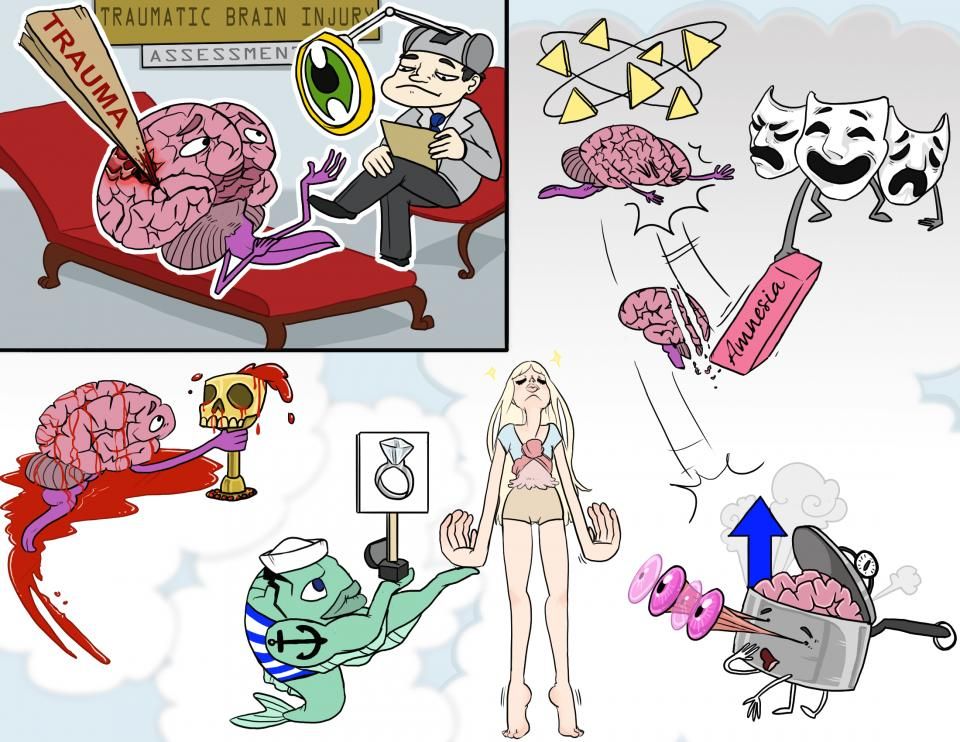 When an external force damages the head - the result is head trauma, and if there’s temporary or permanent brain dysfunction, we call it a traumatic brain injury, or TBI. This external force could be a blunt impact, like a baseball bat, a penetrating injury, like a gunshot wound, a blast wave, like an explosion, or an accelerating-decelerating force, like in a motor vehicle crash. The most common causes of TBIs are falls and motor vehicle crashes, and high-risk groups include the elderly and individuals using alcohol and illicit drugs. When TBIs occur in children, non-accidental trauma, or child abuse, should always be considered.

When an individual has a suspected head trauma, the initial evaluation starts with the primary survey, during which the “ABCDEs” are assessed. “A” is for airway, and individuals with a traumatic brain injury may not be able to protect their airway, leading to aspiration and hypoxia, which can worsens the brain injury. These individuals may require endotracheal intubation and mechanical ventilation. “B” is for breathing, and if there’s increased intracranial pressure, it can lead to an irregular breathing pattern - which is part of the Cushing triad. “C” is for circulation, and hypertension and bradycardia are the two remaining features in the Cushing’s triad. There may also be hypotension, which can reduce brain perfusion.

Next is the secondary survey, which includes a history and head-to-toe physical examination. Key elements in the history are captured in the mnemonic “AMPLE”. “A” for allergies, “M” for medications, like anticoagulants and antiplatelet medications that increase the risk of intracranial bleeding. “P” for pregnancy and past medical history, “L” for last meal, and “E” for the events that caused the trauma, such as the mechanism of injury and whether there was loss of consciousness. It’s helpful to get information from eyewitnesses, because sometimes there can be post-traumatic memory loss or amnesia.

Important physical examination findings to look for include an asymmetric or fixed, dilated pupils which can indicate an impending cerebral herniation. Also, contralateral hemiparesis due to compression of the ipsilateral cerebral peduncle which occurs in uncal cerebral herniation. That can also cause ipsilateral paralysis of the third cranial nerve, causing ptosis, a dilated pupil and a “down and out” eyeball. Sometimes, the contralateral cerebral peduncle is compressed, producing an ipsilateral hemiparesis - that’s called Kernohan’s notch syndrome. Also, it’s important to look for signs of a basilar skull fracture and an underlying hematoma. Signs include periorbital ecchymosis or “raccoon eyes”, a battle sign - which is a hematoma behind the ear, hemotympanum - which is bleeding in the tympanic cavity, and otorrhea or rhinorrhea, which is often bloody discharge mixed with clear cerebrospinal fluid. If cerebrospinal fluid is mixed in with blood, then on gauze, the cerebrospinal fluid travels further along than the blood, producing a “halo sign”; which is a halo or a ring of fluid around a center of blood.

In terms of labs and imaging, a CBC should be obtained, to make sure that the platelet count is at least 100,000 cells per microliter, which is the minimum threshold for neurosurgery. Additionally, PT, PTT, and INR should be checked to make sure that they are normal - since that can worsen a bleed. A urine toxicology, blood alcohol level, and glucose levels should be checked to identify any other potential causes of an altered mental status. Initially, a non-contrast brain CT should be done to see if there’s any shift in the midline of the brain due to a mass effect. A mass effect can compress other structures of the brain, and can cause a cerebral herniation, which is life-threatening. The reason that the scan is done without contrast, is that both blood and contrast are white, making it difficult to detect a bleed. The CT is normal in mild TBI, but may be abnormal in moderate and severe TBI.

One general measure that starts immediately is lowering the intracranial pressure. That’s because the cerebral perfusion pressure, or CPP equals the mean arterial pressure, or MAP minus the intracranial pressure, or ICP. Since we can’t measure cerebral blood flow, we use the CPP to represent it, and in the setting of TBI, the CPP needs to be above 60 mmHg to ensure that the brain gets enough blood. To do that, we can keep the systolic blood pressure above 100 mmHg using intravenous fluids and transfusions, if necessary. Now to measure ICP, an intracranial ICP monitor can be placed in the epidural or subdural space, the brain parenchyma, the lateral ventricle, or the 3rd ventricle of the brain. Usually an ICP monitor is placed in individuals with a GCS less than or equal to 8 and an abnormal CT scan. The ICP is normally around 10 millimeters of mercury, and should be kept below 20 mmHg.

Now, if the ICP monitor is placed in the ventricles of the brain, then we also have surgical access to place an external ventricular drain, or EVD, which can remove cerebrospinal fluid, lowering the ICP. Another way to lower the ICP is using osmotic diuretics like mannitol or hypertonic saline, which work by extracting free water from the neurons. Now, although previously steroids were thought to be helpful in reducing cerebral edema, they currently have no role in TBI treatment, and may in fact worsen outcomes. Finally, if the elevated ICP is refractory to medical therapy, then neurosurgical intervention is necessary. A decompressive craniectomy essentially removes a portion of the skull, allowing the squished brain to “breathe” and the ICP to go down Two more extreme methods of lowering the ICP are a barbiturate coma and therapeutic hypothermia. A barbiturate coma puts the brain to sleep - lowering the metabolic rate - using barbiturate medications like pentobarbital. Therapeutic hypothermia involves cooling the body, which not only lowers ICP, but also protects the brain against secondary injury.

All right, now let’s move on to some specific injuries and their management. Let’s start with skull fractures, which are classified into linear fractures, depressed fractures, or basilar skull fractures - all of which can be seen on a CT scan. A linear fracture is a single fracture that runs through the entire thickness of the skull. They’re usually clinically insignificant, and require no treatment, unless it disrupts an underlying blood vessel like the middle meningeal artery - causing an epidural hematoma. A depressed skull fracture is when the fractured segment folds inwards into the brain parenchyma. These are clinically important because they directly damage the underlying brain, and often require surgery. If a basilar skull fracture is present, it suggests that there was a significant amount of force. That means that there’s a high risk of a hematoma as well as a cervical spine injury. So in that situation, a cervical spine CT should be obtained. Also, basilar skull fractures cause cerebrospinal fluid to leak out through the ear and nose, and there’s increased risk of meningitis.

Epidural hematomas are when blood collects in the space between the dura mater and inner aspect of the skull periosteum. This happens when a linear fracture at the temporo-parietal region of the skull tears open the middle meningeal artery, causing profuse bleeding. Because of the high amount of force required to produce an epidural hematoma, they’re more common among young individuals at risk of such an injury, such as those playing sports or getting into fights. Individuals classically have a period of loss of consciousness, and then can have a lucid-interval; during which the individual regains consciousness and feels fine - but a lucid interval isn’t always seen. Finally, if not treated in time, the individual can have progressive neurologic decline and deterioration to loss of consciousness and coma. If there’s a rapidly growing epidural hematoma it can cause symptoms to progress rapidly, potentially leading to a brain herniation.

A brain CT is diagnostic, and classically shows a convex, “lens-shaped” hyperdense collection of blood. Additionally, epidural hematomas do not cross the suture lines of the skull. In addition to the bleeding, there can be surrounding cerebral edema, and if the edema is significant, it can cause a shift of the midline to the contralateral side, which signifies an impending cerebral herniation. Epidural hematomas are often an emergency, and neurosurgical intervention is often necessary to evacuate the epidural hematoma and suture up the epidural space, preventing re-accumulation of the hematoma. Optimally, a craniotomy; which is removing a portion of the skull is done, and this magnificently cures most individuals. In some settings, a life-saving alternative is to drill a hole in the skull, which is called Burr hole trephination. Finally, non-operative management with serial neurological exams and CT scans may be considered if all of the following criteria are met: the epidural hematoma is less than 30 milliliters in size, the midline shift is less than 5 millimeters, the GCS is greater than 8, and individual has no focal neurological deficits. If the decision is made to manage an epidural hematoma non-operatively, then close observation with serial neurological examinations and brain imaging is required, since there’s a risk for hematoma expansion and clinical deterioration. It is recommended to obtain a follow-up head CT scan within 6 to 8 hours following brain injury.

All right, now a subdural hematoma occurs when blood collects between the dura and arachnoid mater. Unlike epidural hematomas, the bleeding source is usually the bridging veins that connect the cerebral venous sinuses to the superficial veins of the skull. Now, because the source is venous, the bleeding is slower than the arterial bleed in epidural hematomas, and the onset of symptoms depends on how quickly the hematoma accumulates, but tends to be more insidious. Symptoms can include headaches, nausea or vomiting, visual problems, slurred speech, dizziness, cognitive impairment or pseudodementia, seizures, and hemiparesis that can be ipsilateral or contralateral. A subdural hematoma is considered acute if it develops symptoms within 2 days of a head trauma, subacute if it develops between 2 days and 2 weeks of a head trauma, and chronic if it develops 2 weeks or more after a head trauma.

Also, if a subdural hematoma is detected in an infant or young child, it could be due to non-accidental trauma. Infants and children have large heads with relatively small brains, so vigorously shaking a young child can cause a subdural hematoma, as well as other signs of non-accidental trauma like retinal hemorrhages on fundoscopy. In these situations, the history often doesn’t fit the developmental age of the child, like a 2 month old infant who “rolled off the bed”.