A 45-year-old woman presents to a women's health clinic for evaluation of vaginal and vulvar itching. She also reports thick vaginal discharge for two days. Past medical history is significant for type II diabetes mellitus. The patient was recently hospitalized for a complicated urinary tract infection. Vitals are within normal limits. The pelvic examination is shown below. Evaluation of the vaginal swab shows a vaginal pH of 4.0. Which of the following best describes the features of the causative pathogen for this patient’s condition? 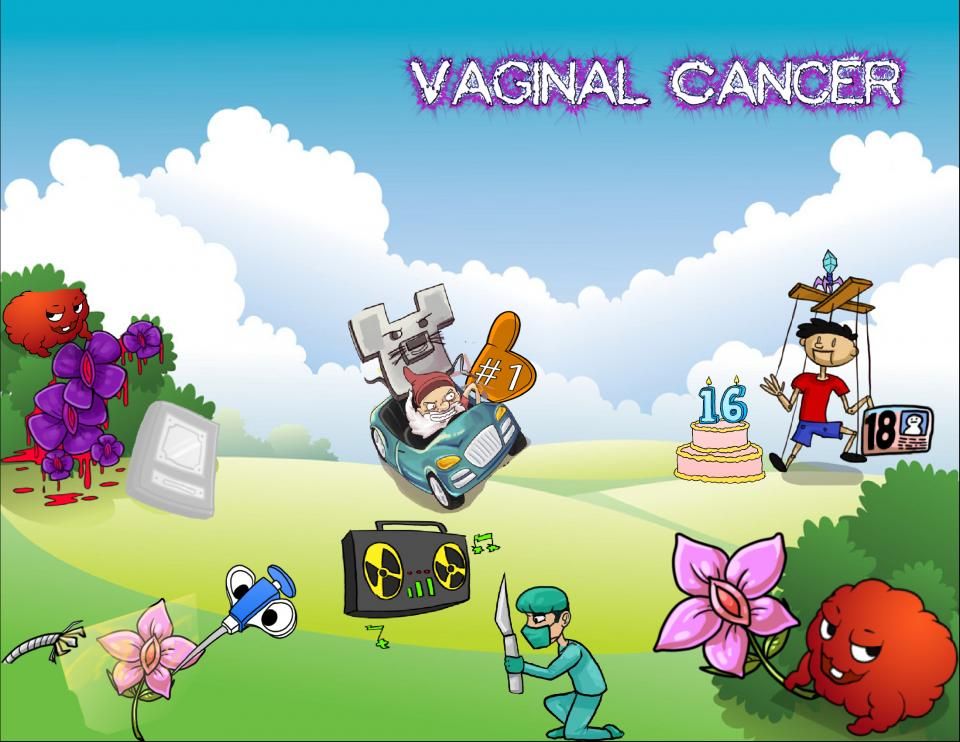 62-year-old Tess comes to the emergency department with vaginal bleeding for the past couple of hours. She also mentions that she has occasionally noticed some watery, foul-smelling vaginal discharge. After ensuring that she is hemodynamically stable, history reveals that her last menstrual period was about 10 years ago and she has had multiple sexual partners. On speculum examination, a suspicious-looking mass is identified in the upper third of the posterior vaginal wall.

Later that day, 69-year-old Oshun comes to the physician's office complaining of an intense burning sensation, itching and pain in her genital region. Her last menstrual period was at the age of 48. On further history, she has been smoking 1.5 packs daily for 40 years. On examination, a white, asymmetrical lump with irregular borders and 1.2 cm in size is seen in the right labia majora.

All right, both Tess and Oshun have some type of vaginal or vulvar condition. Let’s take a look at the Anatomy real quick. The external sex organs, together referred to as the vulva, contain the labia majora, which cover the labia minora, and between the two labia minora there is a space called the vulvar vestibule that includes the opening of the vagina and the the urethral opening. Now, vaginal and vulvar conditions are classified into non- neoplastic ones including bartholin cyst, lichen sclerosus, lichen simplex chronicus, and imperforate hymen and neoplastic ones, which are relatively rare cancers of the female genital tract.

Okay, let’s start with the first non-neoplastic condition, which is the Bartholin cyst. The Bartholin glands are two small glands that lie underneath the vestibule and on each side of the vaginal opening. Normally, they secrete a mucus- like fluid that drains through ducts into the vestibule in order to lubricate the vagina. But when their ducts get blocked, the fluid builds up, causing cystic dilation of the gland. For your exams, remember that blockage typically occurs in females of reproductive age as a result of a mucus plug or a sexually-transmitted infection, and especially, Neisseria gonorrhoea. If the cyst itself gets infected, an abscess occurs.

Now, in a test question, a Bartholin cyst typically presents as a unilateral cystic lesion at the lower vestibule adjacent to the vaginal canal. Most small cysts are not painful, but very large cysts can cause significant pain. And in the case of an abscess, the site will be red, warm, swollen and extremely painful. Diagnosis is clinical and treatment is drainage of the cyst or opening the cyst to create a pouch, called marsupialization.

Now, the reason why lichen sclerosis develops is unknown. A key principle is that although it is benign, for unclear reasons, it’s associated with a slightly increased risk for squamous cell carcinoma. It classically presents with leukoplakia, which is a porcelain-white plaque with a red or violet border. And the epidermis is so thin that examiners often like to describe it with the phrases like “cigarette paper or parchment-like.” That thin epidermis is also very fragile, so skin erosions can be present. Symptoms typically include vulvar itching, and sometimes dyspareunia or painful sexual intercourse. Diagnosis is clinical and treatment may include steroid ointments to reduce itching.

A sort of opposite condition is lichen simplex chronicus. In this case, there’s hyperplasia of the vulvar squamous epithelium as a result of chronic irritation or scratching. It’s more common in individuals between the age of 30 and 50. For your exams, what’s high- yield is that it’s totally benign, and, unlike lichen sclerosus, carries no risk for squamous cell carcinoma.

Presentation is again with leukoplakia, but, in this case, the key is that the vulvar skin is thick and leathery. For symptoms, there’s an itch-scratch vicious cycle where itching leads to scratching and hyperplasia, which results in more itching. Diagnosis is clinical and treatment may include steroid ointments to reduce itching.

The last non-neoplastic condition is an imperforate hymen, which is a congenital disorder where a hymen without an opening completely blocks the vaginal opening. This is caused by a failure of the hymen central epithelial cells to degenerate during fetal development. At birth, it may cause vaginal mucus to build up, causing the hymenal membrane to bulge outwards. That’s usually self resolving, though.

So for your exams, it’s important to know that imperforate hymen typically presents in adolescent females when menstrual blood accumulates in the vagina, which is also known as hematocolpos. A test question might sometimes also show a characteristic picture of a bulging, bluish hymenal membrane. And since menstrual blood can’t go through, there’s primary amenorrhea. However, these individuals do have recurring menstrual cramps and abdominal or pelvic pain, without any outward signs of bleeding. On ultrasound, hematocolpos will be visible. Treatment is with surgical incision of the hymen.

And just like cervical cancer, vaginal cancer can start out as vaginal intraepithelial neoplasia, and it may take many years for it to even progress to cancer. So, it predominantly occurs in postmenopausal females over the age of 60. Now, for your test, it’s important to know that the strongest risk factor is multiple sexual partners, followed by early age at first sexual intercourse, smoking, and immunocompromising conditions, like an HIV infection.

The second, more rare type is clear cell adenocarcinoma, which develops from the glandular cells of the vagina. A high-yield fact is that unlike squamous cell carcinoma, it most commonly affects young individuals under the age of 20 and it’s almost always linked to in utero exposure to a medication called diethylstilbestrol, or DES for short, which is no longer in use. So, the test question will typically describe a female whose mother was prescribed DES during her pregnancy to prevent premature labor or misscarriage.

Next, there’s botryoid rhabdomyosarcoma of the vagina, also known as sarcoma botryoides. This is extremely rare, but high-yield for your exams and develops from rhabdomyoblasts or immature skeletal muscle cells lining the walls of the vagina. It most commonly affects individuals under the age of 4.

For symptoms, vaginal cancer most often cause postcoital or postmenopausal vaginal bleeding. A watery, blood-tinged or foul-smelling vaginal discharge might also be present. Now, in the later stages, when the cancer has spread further and invade into organs like the bladder, there may also be symptoms like urinary frequency, dysuria and hematuria.

If the cancer has spread to the rectum, there may be constipation. The cancer cells can also metastasize to the lymph nodes, in which case pelvic pain can be present. Very important to know for examination purposes is that the region of lymph nodes where cancer spreads depends on the location of the tumor in the vagina. So, tumors from the lower two thirds of the vagina will go to the inguinal lymph nodes, while tumors from the upper one third will go to the nearby iliac nodes.

Now, diagnosis starts with the speculum examination. Most commonly, vaginal cancer looks like a mass, but it can also look like a white plaque or an ulcer. In the case of sarcoma botryoides, it’s important to know that the mass is polypoid and protrudes through the vagina. The key phrase here is that this mass resembles “a bunch of grapes”.

In all cases, remember that vaginal cancer typically originates from the upper third of the posterior vaginal wall. To confirm the diagnosis, when there’s a vaginal mass, a biopsy is done. When there is no mass, vaginal cytology can be done. This is frequently combined with HPV genotyping, meaning the vaginal cytology sample is analyzed for the presence of high risk HPV DNA.