A 74-year-old man is brought in by ambulance alone to the emergency department. He has a past history of mild vascular dementia. After examination, it is determined that he needs an emergent procedure. Which of the following is necessary to invoke implied consent in an emergent situation? 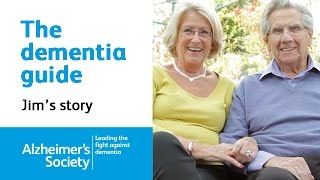 With vascular dementia, vascular refers to the blood flow to the brain, and dementia refers to problems like poor memory, difficulty communicating, and difficulty learning new information.

Vascular dementia is also known as multi-infarct dementia, and it’s a progressive loss of brain function caused by long term poor blood flow to the brain, typically because of a series of strokes.

The frontal lobe controls movement, and our personalities, it also handles our ability to count and spell, and make decisions.

Finally there’s the occipital lobe which is primarily responsible for processing visual information.

All the cells in the body need oxygen - and that’s particularly relevant for neurons, which can only function in aerobic conditions, meaning with constant supply of oxygen.

Neurons also don’t have long term energy stores, so they need a constant supply of glucose to keep working.

Each time the heart beats, about a quarter of the blood pumped out goes directly to your brain, via the internal carotid arteries and the vertebral arteries in the neck.

Once they reach the base of the brain, these arteries join to form a ring, called the circle of Willis, which then branches off into smaller and smaller arteries, the smallest being the perforating arteries, that eventually supply the entire brain with oxygen and glucose.

Vascular dementia develops in some individuals, when atherosclerosis starts to form in the arteries.

That’s when there’s a buildup of plaque that thickens and hardens the artery wall.

When this process affects the arteries supplying the brain, like the carotid arteries, it leads to a gradual decrease in blood flow to the brain - which is called chronic ischemia.

Sometimes, small parts of the plaques can break away and these bits can drift up towards the brain, and can then eventually block a smaller artery, completely stopping the blood supply to the part of the brain that’s supplied by that artery.

Other times, the tiny perforating arteries are affected by atherosclerosis and can get completely blocked off by plaque growing within them.

Regardless of the cause, once blood supply to the brain falls below the demands of the tissue, it’s considered an ischemic stroke.