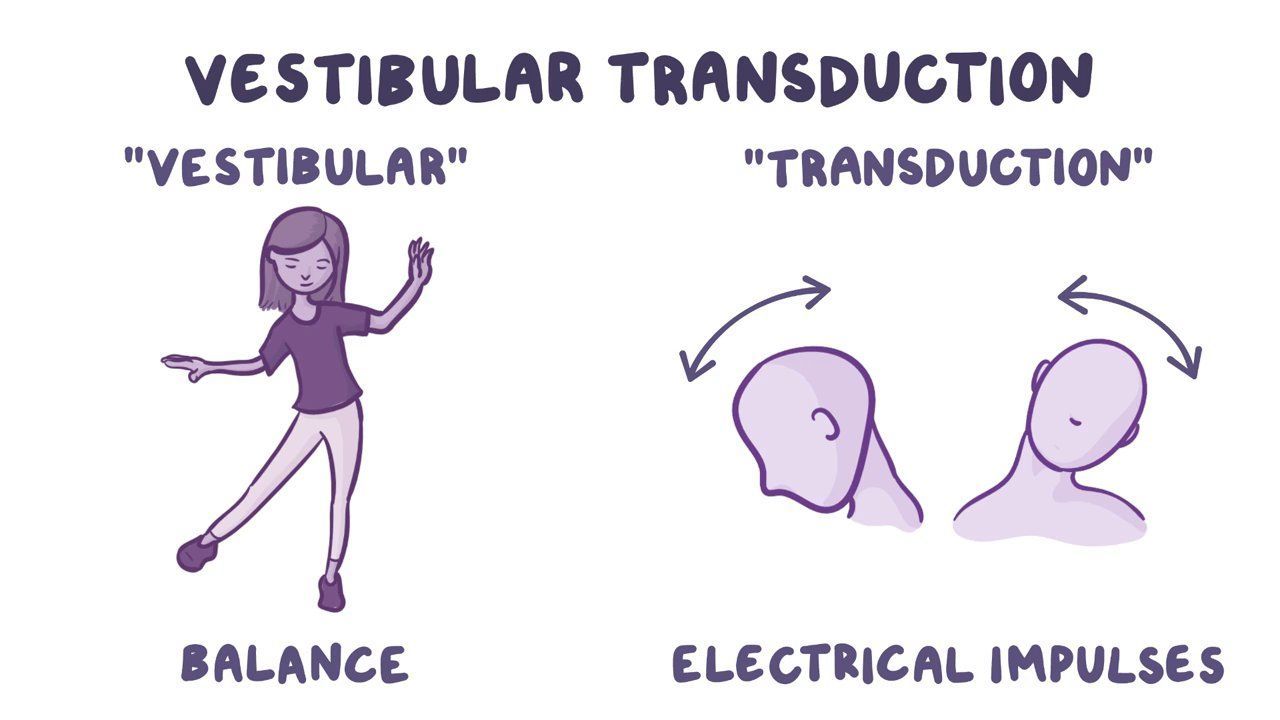 The semicircular canals constitute the sense of (static/dynamic) equilibrium.

With vestibular transduction, “vestibular” refers to balance, and transduction refers to the process by which the ear converts specific head movements into electric impulses, so that we can interpret where we are in space.

The ear is made up of three parts: the outer ear, the middle ear, and the inner ear.

The outer and middle ear only play a role in hearing - however, the third part, the inner ear, deals with both hearing and balance.

The bony and membranous labyrinth make up the structure of all three parts of the inner ear.

The first is the vestibule, which is like a hallway that leads up to two other parts or rooms - the cochlea, towards the front of our head, that deals with hearing, and a second room containing the three semicircular canals, towards the back.

The semicircular canals, along with two other structures - the utricle and saccule, which are located in the vestibule - make up the vestibular apparatus, that helps us detect changes in our static and dynamic equilibrium.

Our static equilibrium is a job for the utricle and saccule - also known as the otolith organs. They contain endolymph, as well as special balance receptors that detect changes in our head position in relation to horizontal or vertical acceleration.

Now, inside the utricle, there’s a region called the macula - which looks like like a bean-shaped shaggy rug lying on the floor.

The macula is where our balance receptors, called the hair cells, can be found.

Each hair cell has multiple finger-like projections - called stereocilia - and a single kinocilium.

These stereocilia are arranged in rows, depending on their length - the longer ones are closer to the kinocilium, and the shorter ones are further away from the kinocilium - like a cool haircut.

Finally, the bottom of each hair cell is connected to sensory neurons that make up the vestibular branch of the vestibulocochlear cranial nerve, that carries balance information to the central nervous system.

Ok, so the utricular macula senses changes in our head position in the horizontal axis - like when we feel pushed towards the back of a seat in a speeding race car. This is possible because a curved line - called the striola - divides the macular hair cells into two populations.

Some of the hair cells are in front of the striola, and some are behind it.

However, the cilia on the hair cells on either side of the striola are arranged so that the kinocilia of all cells face towards the striola, and this allows the macula to sense both backwards and forwards movement of the head.

To get a better sense of this, let’s go back to our race car example. Acceleration displaces the otolith membrane towards the back of the head, which means different things for the two populations of hair cells.

For hair cells in front of the striola, each stereocilium bends towards the longer one in the next row, and ultimately towards the kinocilium - like wind blowing your hair back.

At the tip of each stereocilium there’s a protein filament called a tip link that is attached to a mechanically gated potassium channel in the membrane of the longer stereocilium in the next row.

The tip link on the shorter stereocilia opens the potassium channel on the longer stereocilia - in other words, the arm opens the door. This makes potassium ions flow from the endolymph, through the door and into the hair cell, making the cell membrane depolarize.

At the bottom of each hair cell — called the presynaptic membrane— depolarization opens voltage-gated calcium channels. Calcium ions enter the cell and cause glutamate - which is stored inside vesicles - to be released into the synaptic space.

The sensory neurons at the bottom of the hair cells interpret glutamate as a “go” signal, and depolarize, sending an electrical impulse to the brain.

However, when the otolith membrane is displaced towards the back of the head, this also makes the kinocilium of the hair cells behind the striola bend towards the stereocilia - so no action potential and, in turn, no glutamate “go” signal is generated.

If, however, the speeding car suddenly stopped, the driver would first be pushed to the front - and this means that the otolith membrane would be displaced towards the front of the head. So this time, hair cells behind the striola generate an action potential, whereas the ones in front of it don’t.

The brain processes the activation and deactivation of particular hair cells to understand in which direction we are moving.

Now, on the other hand, we’ve got the saccule - which has its own macula.

The saccular macula has the same structure as the utricular macula - hair cells embedded in an otolith membrane, but there’s a twist. This time, the macula is vertically oriented, so basically hanging on the saccular wall like a tapestry.

The saccular macula also has a striola, which divides the hair cells in a superior and an inferior group.