A 25-year-old woman comes to the clinic due to myalgia, loss of appetite and a skin rash.  She noticed a progressively worsening skin rash around her eyes, nose and mouth over the course of the last 4 weeks. She has not had a fever, and the rash is not painful or pruritic. Five months ago, she began an intense fitness regimen with a strict diet, which includes eating multiple egg whites everyday, as well as a protein shake every morning, in which she puts several raw eggs. Temperature is 37.0°C (98.6°F), pulse is 80/min, respirations are 20/min, and blood pressure is 125/85 mmHg. BMI is 19 kg/m2. Physical examination reveals macular patches around her eyes, nose and mouth. The physician suspects a nutritional deficiency. The cause of this patient’s symptoms is determined to be a vitamin deficiency that acts as a cofactor for the enzyme acetyl-CoA carboxylase. Which of the following additional biochemical processes uses the deficient vitamin as a cofactor? 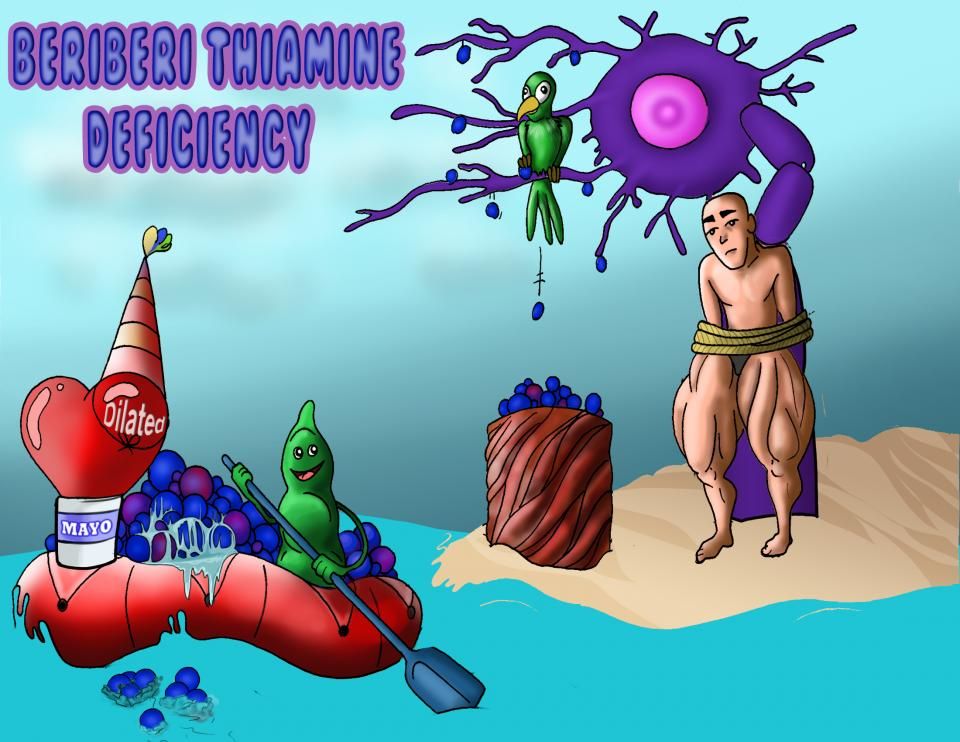 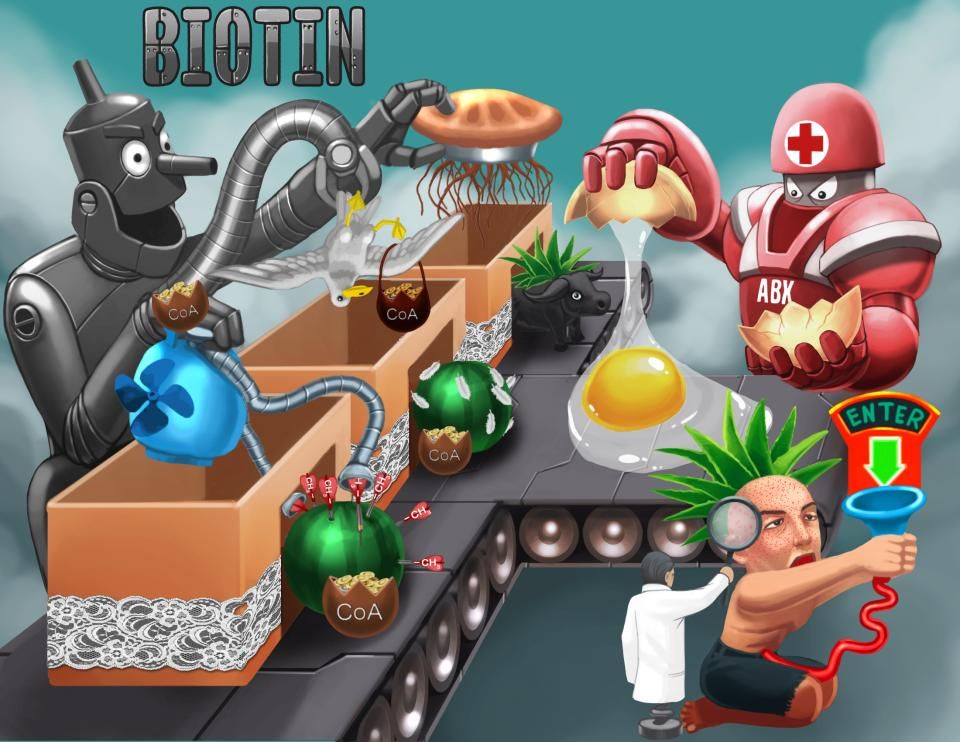 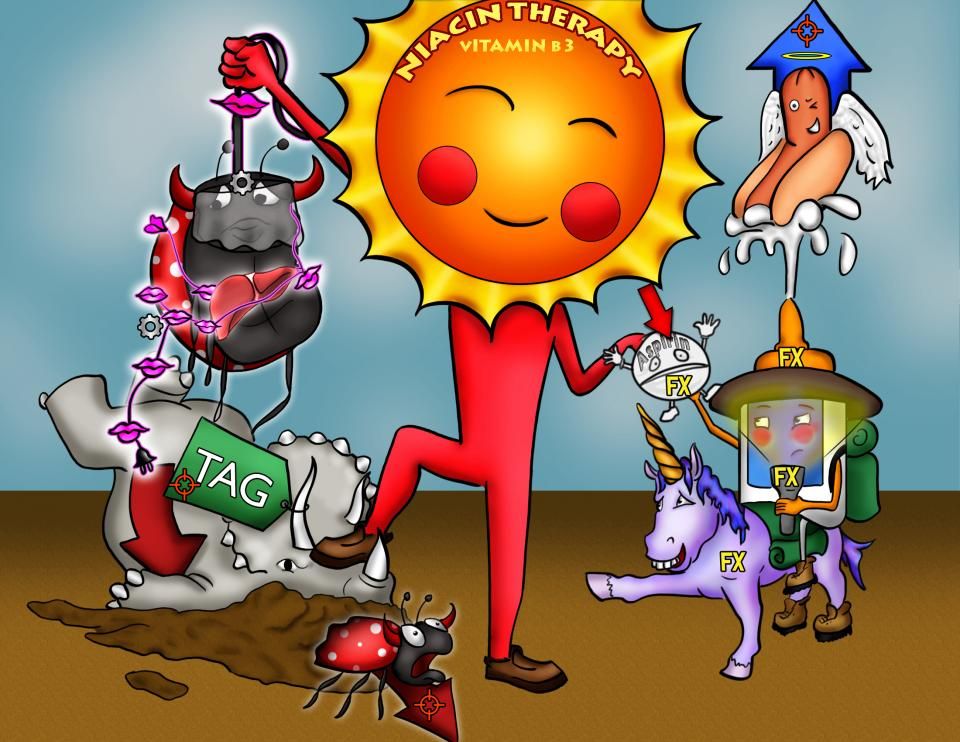 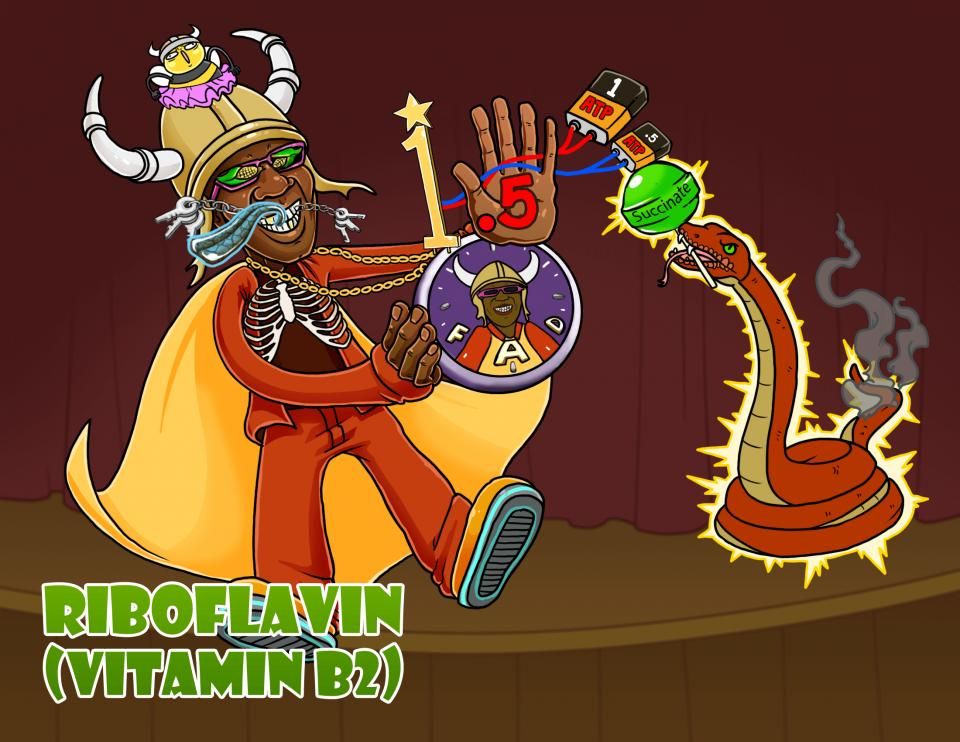 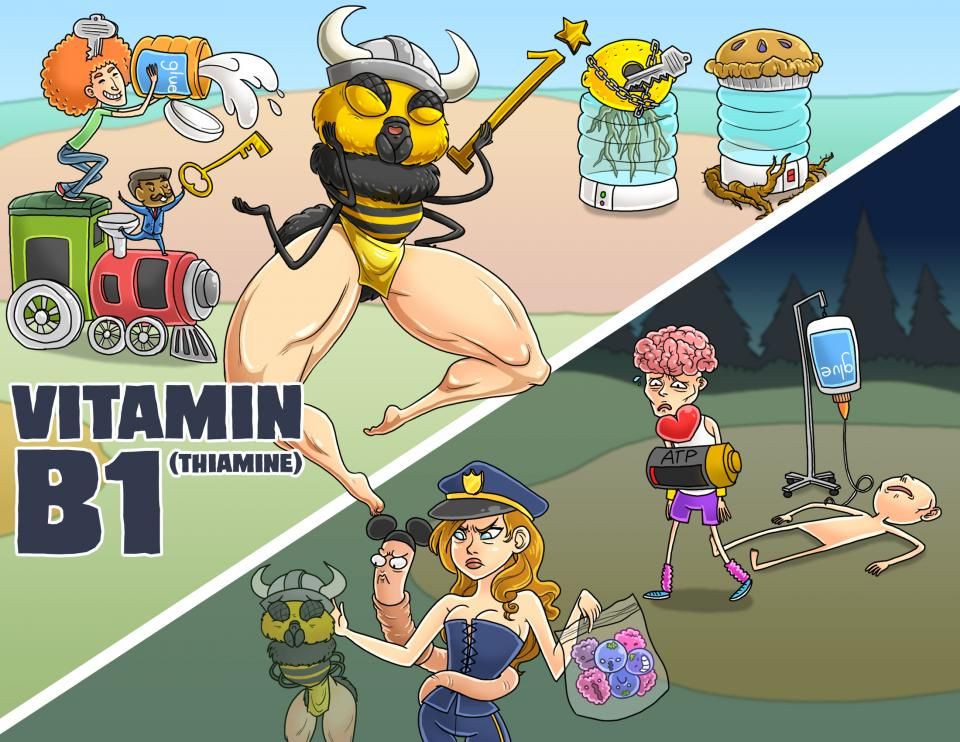 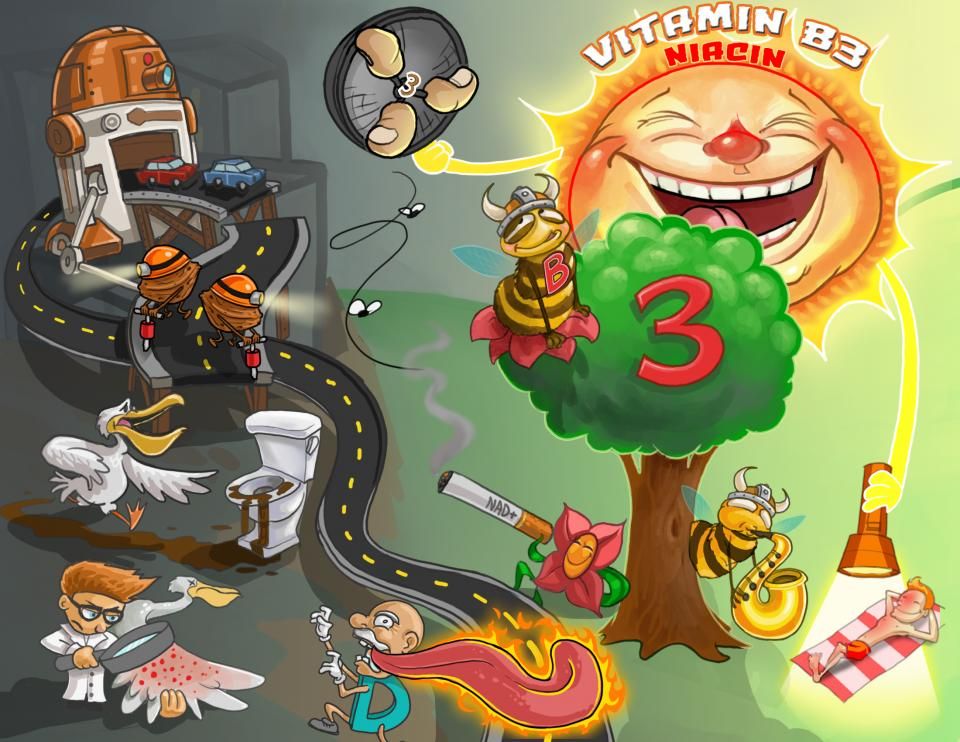 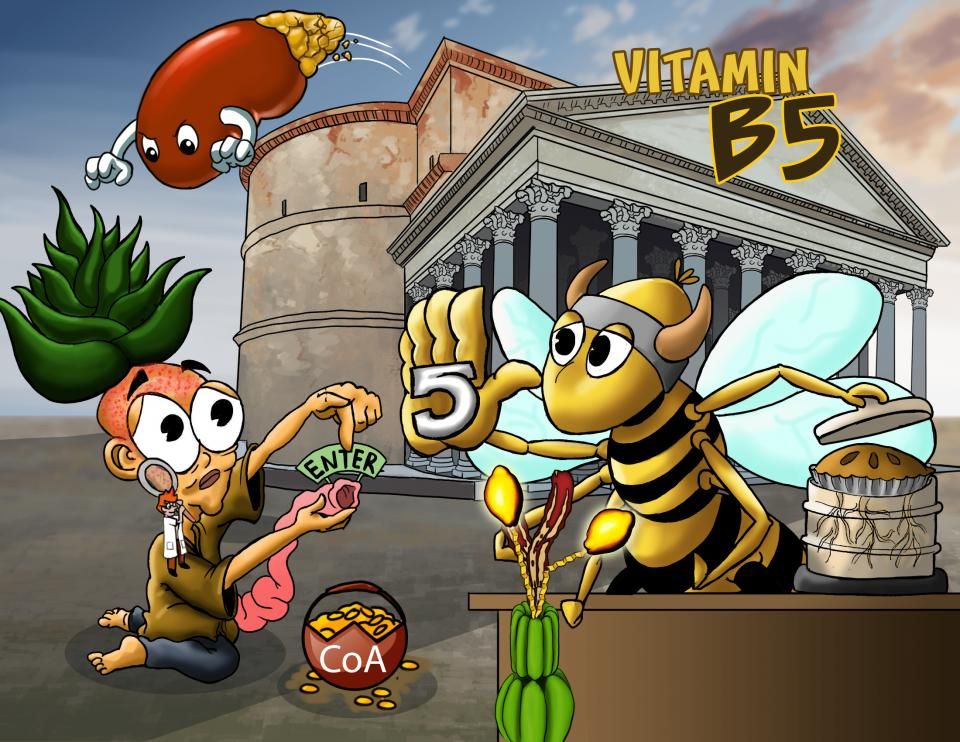 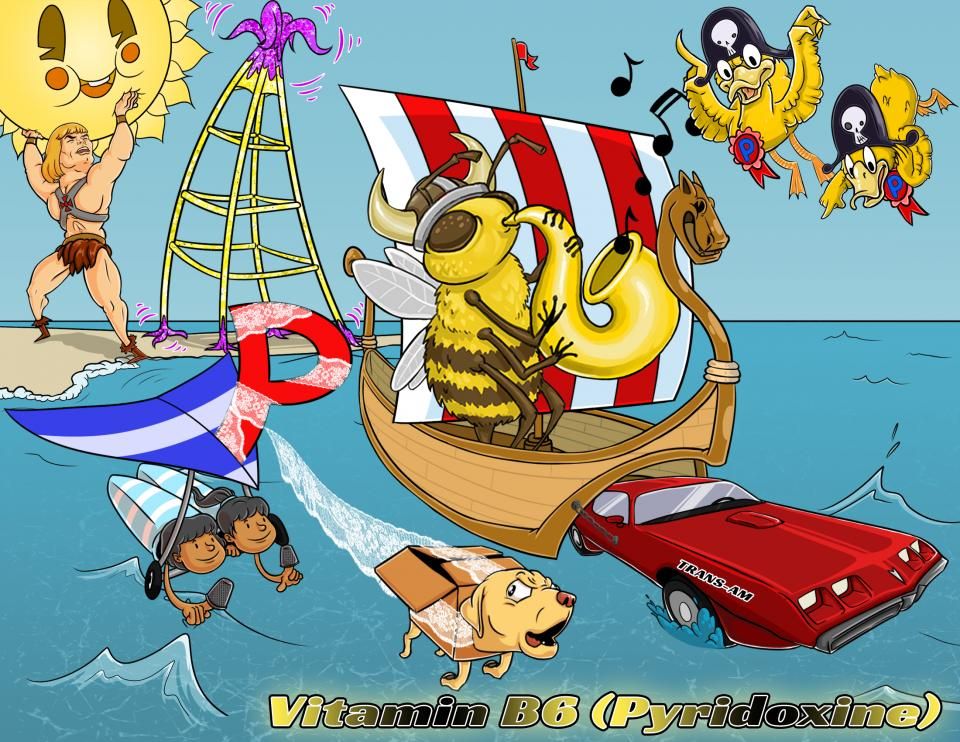 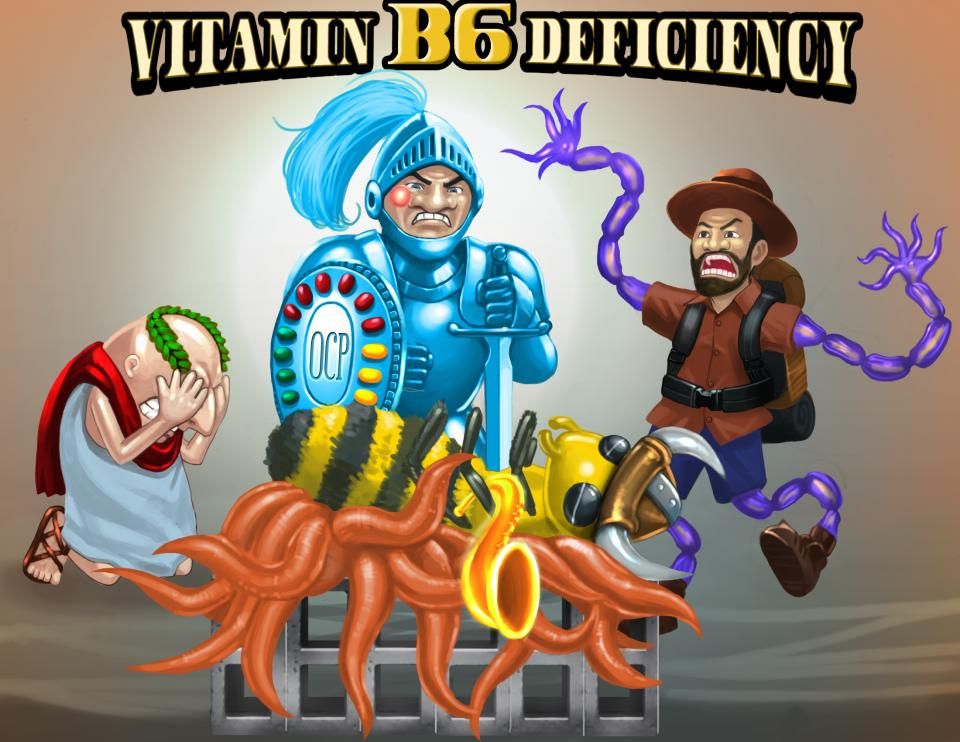 82 year old Henry presents to the clinic with his daughter, who is really worried that he is not eating proper meals, but he refuses any help.

She mentions that Henry has been living alone since his wife died, about two years ago.

Upon physical examination, you notice that Henry is severely underweight; in addition, his tongue is swollen, and he has some scaling and painful lesions on his lips and at the corners of his mouth.

Next to him, 60 year old Beth is brought to the clinic by her son because she’s had several episodes of diarrhea for the past few weeks.

Her son also mentions that Beth has started forgetting things, and that she has a history of chronic alcohol abuse.

Based on the initial presentation, both Henry and Beth seem to have some form of water- soluble vitamin deficiency or toxicity.

Water-soluble vitamins include the B-complex vitamins and vitamin C.

And just like all vitamins, they need to be derived from food, and inadequate dietary consumption can result in deficiency.

So, in a test question, look for individuals who come from lower income countries, are at an advanced age, engage in chronic alcohol abuse, or have an eating disorder like anorexia nervosa.

Okay, now, another high yield fact is that water-soluble vitamins get easily excreted in the urine.

On the other hand, fat-soluble vitamins get stored in fat cells.

And that’s why their toxicity, also known as hypervitaminosis, is much less common than that of fat-soluble vitamins, which instead get stored in fat cells.

Okay, now in this video, we’re gonna be focusing on the water-soluble vitamins B1 through B7!

Let’s start with vitamin B1, also known as thiamine, which is mainly found in whole grain cereals and legumes.

The active form of B1 is thiamine pyrophosphate or TPP TTP, which acts as a cofactor for four important enzymes.

These include pyruvate dehydrogenase, which converts pyruvate coming from glycolysis into acetyl-CoA, which can then be used in the Krebs cycle, also known as the tricarboxylic acid or TCA cycle.

The third enzyme is branched-chain alpha ketoacid dehydrogenase, which is involved in the breakdown of branched chain amino acids.

And finally, there’s transketolase, that’s part of the pentose phosphate pathway, also known as the hexose monophosphate or HMP shunt, which provides an alternative pathway to glycolysis.

As a result, thiamine deficiency impairs carbohydrate and amino acid metabolism, which is essential for the production of energy in the form of ATP.

For your exams, remember that this mainly affects tissues with high energy requirements, such as the brain and the heart.

And for your exams, remember that the main causes of thiamine deficiency are inadequate dietary intake or chronic alcohol abuse.

Now, a very high yield manifestation of thiamine deficiency is Wernicke encephalopathy, which is an acute and reversible neurologic condition characterized by a classic triad of symptoms, including ophthalmoplegia, ataxia, and altered mental status.

Now, ophthalmoplegia means weakness or paralysis of the eye muscles, and it occurs when there’s damage to the brainstem.

Next, ataxia or unsteady gait, occurs when there’s damage to the cerebellum, which is responsible for coordination of our movements.

Finally, altered mental status occurs when there’s damage to the mammillary bodies, which are part of the limbic system.

So, this can manifest as confusion, apathy, difficulty concentrating, and disorientation.

If not promptly treated, Wernicke encephalopathy can lead to coma and death.

Now, severe thiamine deficiency can lead to Korsakoff syndrome, which instead is chronic and irreversible.

For your exams, it’s important to know that the damage usually occurs in the thalamus, and more specifically, in the anterior and dorsomedial nuclei.

And another characteristic finding is confabulation, which is when the person creates stories to fill in the gaps in their memory which they believe to be true.

For your exams, note that there’s also Wernicke-Korsakoff syndrome, which presents as a combination of Wernicke encephalopathy and Korsakoff syndrome, and occurs due to damage to the mamillary bodies and the dorsomedial nuclei of the thalamus.

Moving on, another high yield manifestation of thiamine deficiency is beriberi, which can occur in two forms, dry and wet.

Dry beriberi is characterized by peripheral neuropathy, which may manifest as burning, tingling, prickling, and pain in the hands and feet, as well as symmetrical muscle wasting, especially involving the lower limbs.

On the other hand, wet beriberi typically affects the cardiovascular system, resulting in high output heart failure, meaning that the body has an unusually high demand for blood that can’t be met, even though the heart is pumping a high volume of blood.

This can manifest as dyspnea, tachycardia, and most importantly, peripheral edema or swelling of the lower legs.

Ultimately, wet beriberi can lead to dilated cardiomyopathy, where the heart becomes enlarged and weak.

Now, diagnosis of thiamine deficiency involves a thiamine loading test, in which we measure the activity of transketolase in red blood cells twice, once before and once after giving a thiamine load.

In addition, individuals with malnutrition or chronic alcoholism may also require glucose infusion.

But, what’s extremely important to remember is that glucose should not be administered before thiamine levels normalize.

That’s because it will increase thiamine demand by its four dependent enzymes, further exacerbating the deficiency and ultimately precipitating Wernicke encephalopathy.

Okay, next up is vitamin B2 or riboflavin, which is found mainly in leafy green vegetables, nuts, cheese, milk, and eggs.

Riboflavin is the precursor of flavin mononucleotide or FMN, and flavin adenine dinucleotide or FAD, which act as coenzymes in several reduction-oxidation or redox reactions, in which electrons are transferred from one molecule to another; an important example that you have to know for the exams is the succinate dehydrogenase reaction in the Krebs cycle, where the enzyme succinate dehydrogenase converts succinate to fumarate using FAD as coenzyme.

Finally, riboflavin is also required to synthesize vitamin B3 or niacin in the liver.

For your tests, it’s important to know that riboflavin deficiency manifests as glossitis or a swollen and inflamed tongue; as well as angular cheilosis, meaning there’s inflammation of the lips with scaling and painful fissures affecting the corners of the mouth.

Another characteristic finding is corneal neovascularization, which is the formation of abnormal blood vessels in the cornea.

Finally, some individuals may develop seborrheic dermatitis, which presents with inflamed scaly skin lesions in areas rich in sebaceous or oil-producing glands, such as the face, scalp, and chest.

Okay, now let’s move on to vitamin B3, also called niacin or nicotinic acid, which is found mainly in cereals, seeds, legumes, as well as animal liver products.

Niacin can also be synthesized in the liver from the amino acid tryptophan, and its synthesis requires two other B vitamins, B2 and B6.

Because of that, niacin can be used as a lipid lowering agent to treat dyslipidemia, which refers to abnormal blood levels of lipids like cholesterol.

But what’s unique here is that it can also be caused by Hartnup disease, which is an autosomal recessive disorder characterized by deficiency of transporters of neutral amino acids, like tryptophan, in the gastrointestinal tract and the proximal convoluted tubule.

As a result, there’s a decreased tryptophan absorption in the gastrointestinal tract, and an increased excretion in the urine.

This means that there’s not enough tryptophan left in the body to synthesize niacin, and ultimately leads to niacin deficiency.

Hartnup disease can be treated with a high-protein diet that contains tryptophan, as well as daily supplementation with niacin.

Another cause of niacin deficiency is carcinoid syndrome, where cancerous neuroendocrine cells start producing a variety of hormones, including serotonin.