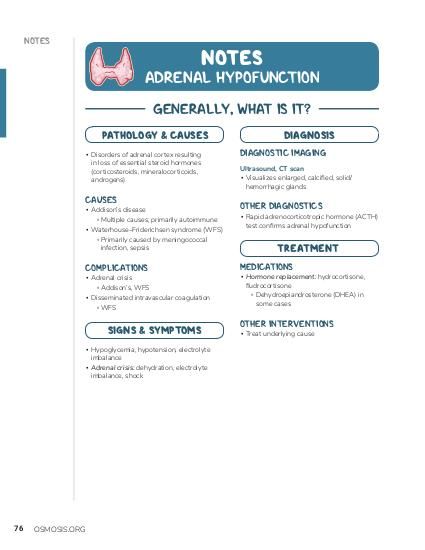 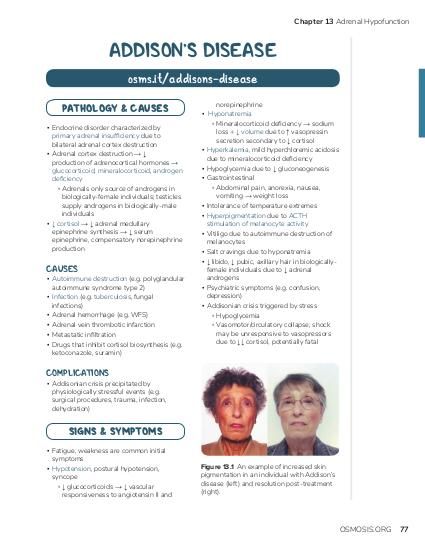 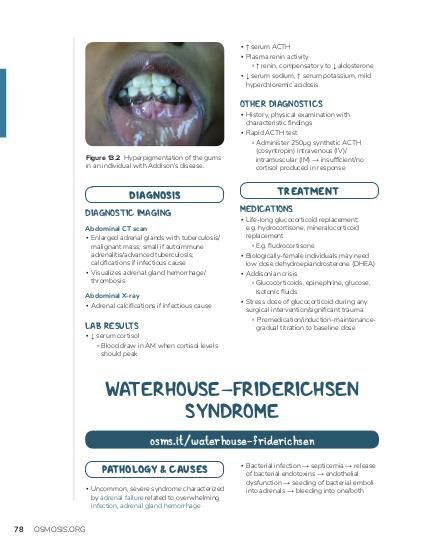 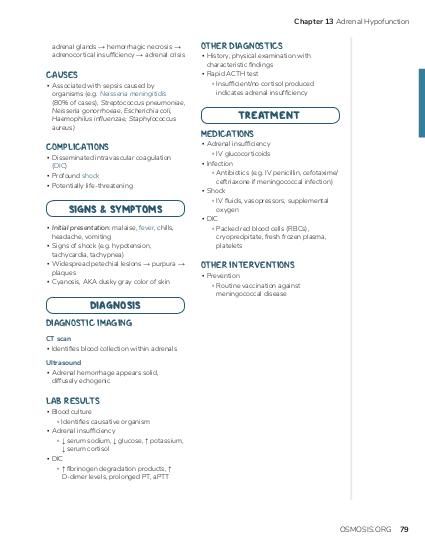 Waterhouse-Friderichsen Syndrome is an acute form of primary characterized by hemorrhagic necrosis of the adrenal glands.

A 20-year-old man comes to the emergency department because of fever and altered mental status. Physical examination reveals a petechial rash on his trunk and arms and a positive Kernig sign. Two hours later he becomes hypotensive, and fluid resuscitation does not restore his blood pressure. A comprehensive metabolic panel is obtained and shows a sodium level of 119 mEq/L and potassium level of 6.0 mEq/L. A repeat physical examination shows generalized abdominal tenderness elicited upon deep palpation. Which of the following is the most likely additional finding? 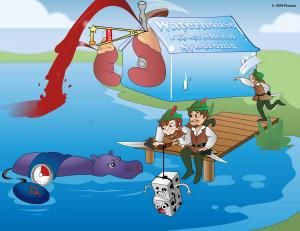 This results in adrenal crisis, or acute adrenal insufficiency, which is when the adrenal gland suddenly stops producing hormones.

The syndrome is named after two physicians - Waterhouse and Friderichsen who separately described the syndrome back in the early 1900’s.

The adrenal cortex is subdivided into three more layers, the zona glomerulosa, zona fasciculata, and the zona reticularis.

The adrenal cortex secretes hormones under the control of adrenocorticotropic hormone, released by pituitary gland.

The outermost layer is the zona glomerulosa, which makes the hormone aldosterone.

Aldosterone acts on the nephrons of the kidney, and decrease potassium levels, increase sodium levels, and increase blood volume and blood pressure.

The middle layer is the zona fasciculata, which makes the hormone cortisol, as well as other glucocorticoids.

The main job of glucocorticoid is to increase blood glucose levels, especially when there’s emotional and physical stress.

Finally, the innermost layer is the zona reticularis, which makes a group of sex hormones called androgens.

In women, androgen causes a growth spurt, and growth of underarm and pubic hair during puberty.

The adrenal gland gets blood through three main arteries- the superior, middle, and inferior suprarenal arteries.

After delivering oxygen to those tissues, the blood starts to collect again in the medullary vein and eventually into the suprarenal vein.

The root cause of Waterhouse-Friderichsen syndrome is severe bacterial infection, or sepsis.

This sepsis is typically due to Neisseria meningitidis, which is a gram-negative bacteria that is best known for causing meningitis.

Other bacteria that can cause Waterhouse-Friderichsen syndrome include Pseudomonas aeruginosa and Haemophilus influenzae.

The outer membrane of these bacteria contains endotoxins, which are large clunky lipopolysaccharide molecules, or LPS.

These LPS molecules directly damage endothelial cells of the blood vessels, and cause them to release procoagulant-like tissue factor, which promotes blood clot formation within blood vessels.