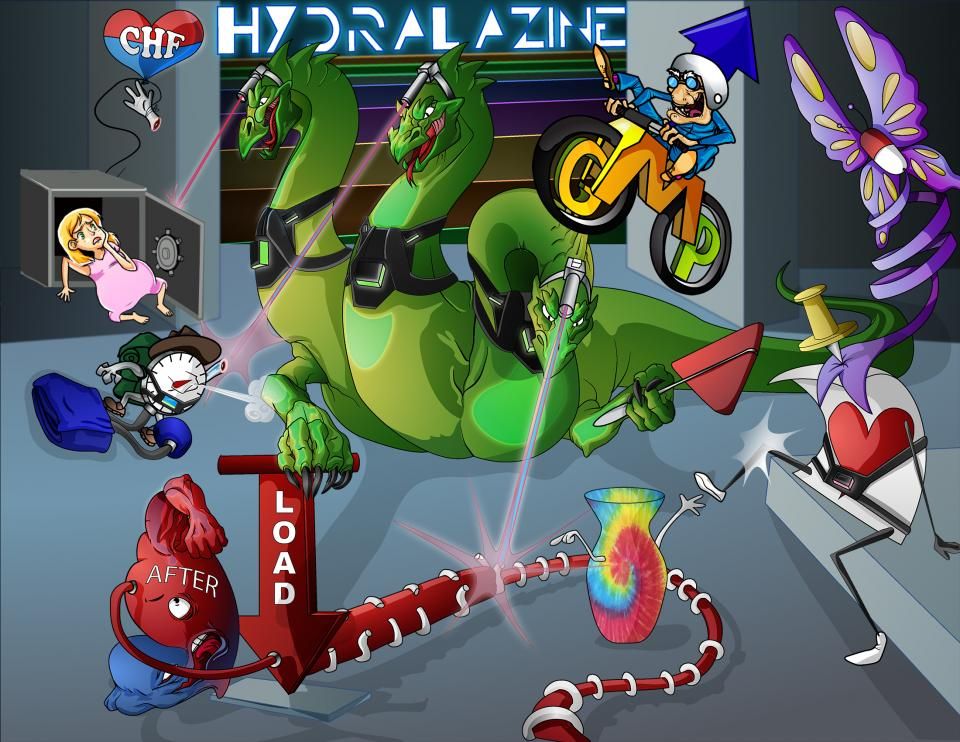 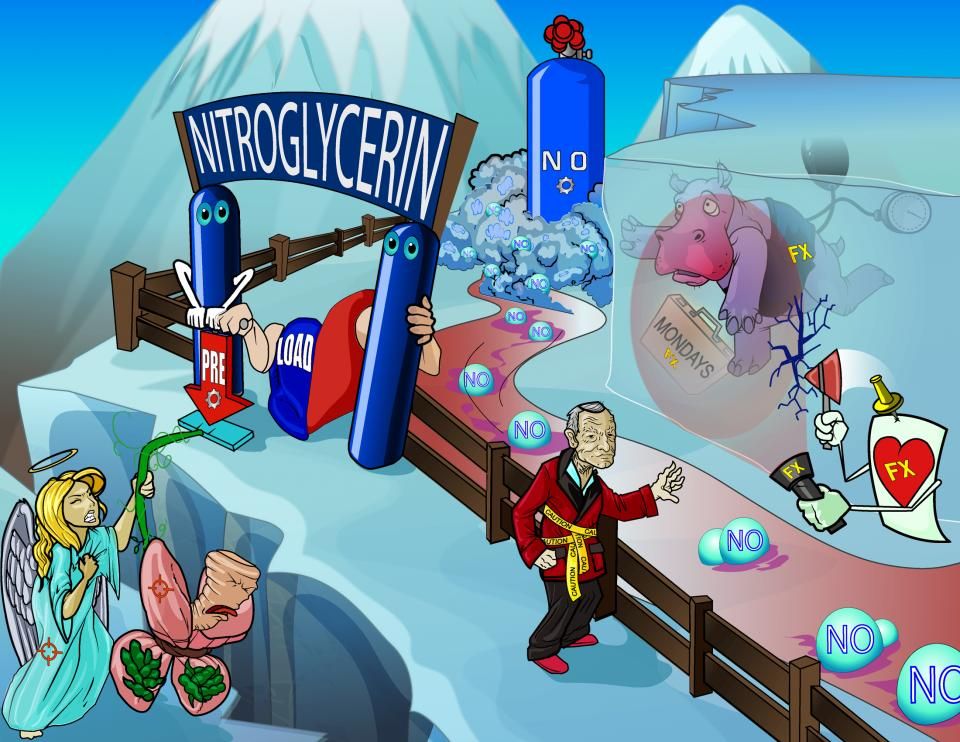 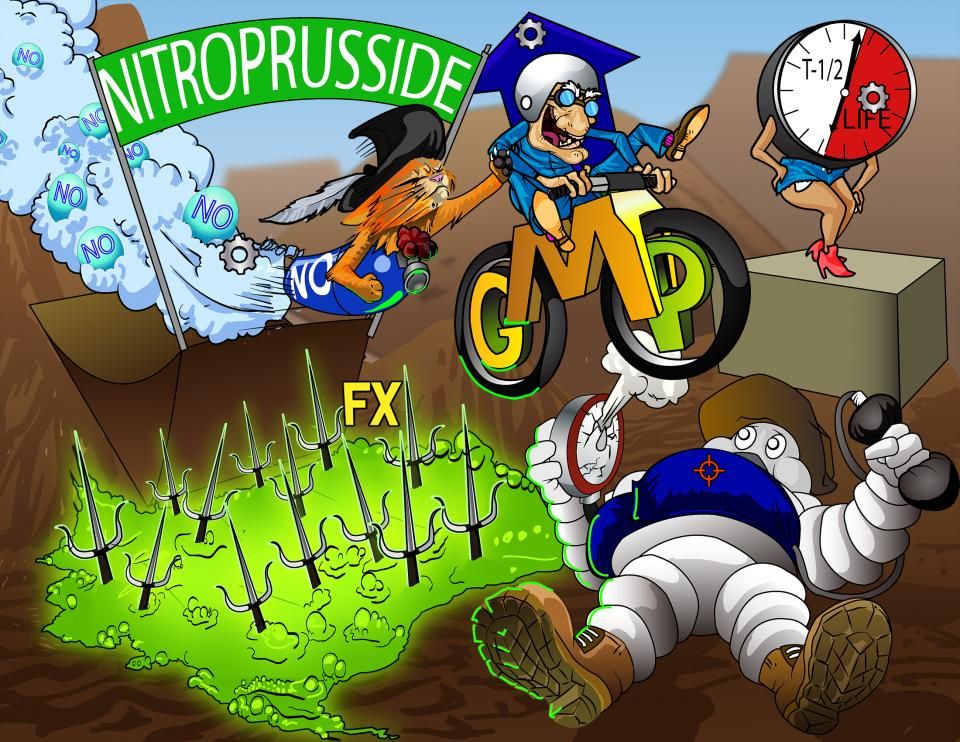 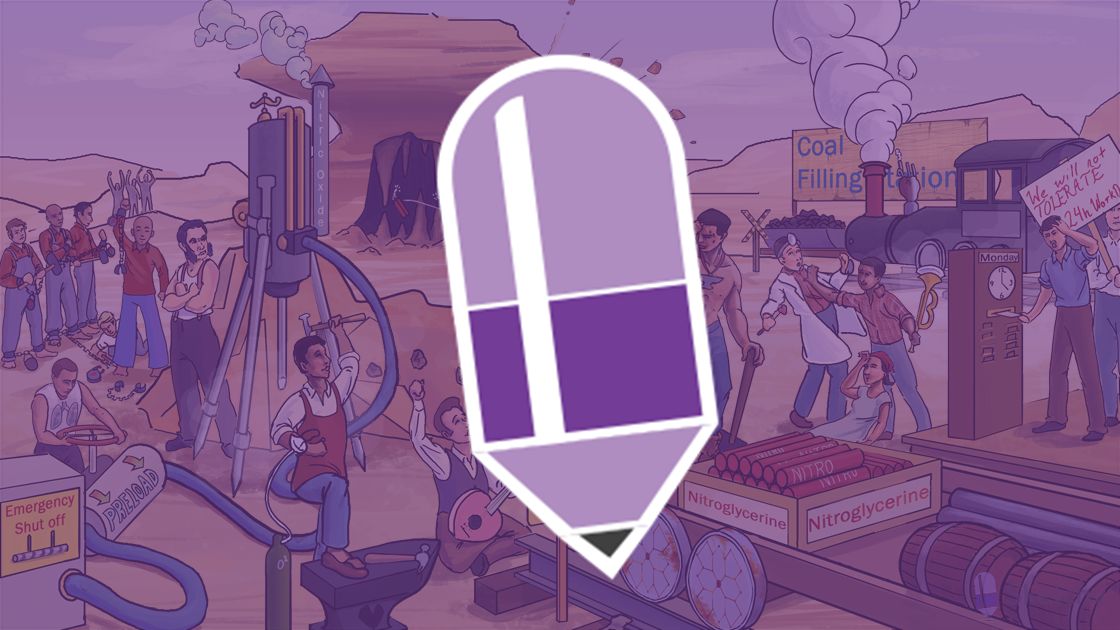 cGMP-mediated smooth muscle vasodilators, as their name implies, are medications that promote dilation of blood vessels by potentiating the effect of cyclic guanosine monophosphate, or cGMP for short. These medications are mainly used to treat hypertension, heart failure, and angina pectoris, which is a pain caused by reduced blood flow to the heart muscle. All right, first, let’s focus on the structure of blood vessels. Blood vessels have three layers, also called “tunics,” or coverings, that surround the vessel lumen, which is the hollow part of the vessel that contains the blood. The innermost tunic is the tunica intima, which includes the endothelial cells; the next one is the tunica media, or middle tunic, which is mostly made of smooth muscle cells and sheets of elastin protein; and finally, there’s the tunica externa, or outside tunic, which is made up of loosely woven fibers of collagen. Moreover, the tunica media can contract, causing vasoconstriction, where the lumen gets a lot smaller; or it can relax, or vasodilate, causing the lumen’s diameter to increase, allowing for more blood flow.

Now, within endothelial cells of the tunica intima, there’s an enzyme called nitric oxide synthase, which uses the amino acid L-arginine and molecular oxygen to synthesize nitric oxide or NO for short. Once synthesized, nitric oxide diffuses to adjacent smooth muscle cells in the tunica media, where it binds and activates an enzyme guanylyl cyclase. This enzyme converts guanosine triphosphate, GTP, into cyclic guanosine monophosphate, cGMP, which is a second messenger that induces relaxation of smooth muscle cells in vessel walls. All right, now moving on to pharmacology. cGMP-mediated smooth muscle vasodilators are subdivided into two main groups: antianginal medications, which are used to treat anginal pain, when oxygen delivery to the heart is inadequate for normal heart function; and antihypertensive medications, which are used to treat high blood pressure.

First, let’s start with antianginal medications, also known as nitrates. These medications are actually prodrugs, meaning that they need to be converted into their active form, called nitric oxide, before they can produce the desired effect. Once converted, nitric oxide diffuses to surrounding smooth muscle cells and stimulates guanylyl cyclase, thereby increasing the concentration of cGMP. Ultimately, this results in vasodilation of both veins and arteries. But, even though they affect both, nitrates dilate veins and venules more than they dilate arteries and arterioles. Moreover, vasodilation of small veins and venules result in peripheral pooling of the blood and decreased return of the venous blood to the heart. This way nitrates predominantly reduce preload, which is the volume of blood that the heart must eject with each contraction. On the other hand, vasodilation of small arteries and arterioles lowers the systemic vascular resistance, so nitrates will also reduce afterload, which is the pressure that the heart must work against to eject the blood. Ultimately, by reducing preload and afterload, nitrates reduce the amount of work the heart has to do, and eventually decreasing the heart’s oxygen consumption; but, at the same time, they increase oxygen delivery to heart tissue by dilating coronary arteries to a small degree.

Common side effects of nitrates include flushing, headache, orthostatic hypotension, and reflex tachycardia, which is treated by co-administration of beta blockers. Interestingly enough, workers in the construction and demolition industries who are regularly exposure to nitroglycerin or isosorbide dinitrate at their job can develop “Monday disease.” This is characterized by building up tolerance throughout the workweek and then losing that tolerance during the weekend. When they re-expose themselves to the nitrates the following monday, they experience tachycardia, dizziness, and headaches until they develop tolerance again. It’s important to note that nitrates are contraindicated in individuals with right ventricular infarction, since they’re very sensitive to changes in the preload, therefore they can easily develop severe hypotension. As far as drug interactions go, nitrates should not be combined with medications that are used to treat erectile dysfunction, like sildenafil, tadalafil, or vardenafil. These medications block the enzyme phosphodiesterase 5, which converts cGMP into its inactive form, GMP. So if taken together, it results in an accumulation of cGMP that can’t be inactivated, which may lead to a precipitous fall in blood pressure, myocardial infarction, and even death.

Now switching gears and moving on to antihypertensive medications - hydralazine and nitroprusside. First, let’s focus on hydralazine which works by increasing the level of cGMP in smooth muscle cells, but the mechanism is not fully understood. However, unlike nitrates, hydralazine dilates arteries and arterioles more than it dilates veins, thereby predominantly reducing afterload. Now for indications, intravenous hydralazine is used to treat acute hypertensive emergencies, like preeclampsia or hypertension in pregnancy; while oral hydralazine is used to treat chronic hypertension, when other antihypertensive medications are not effective. In addition, hydralazine in combination with nitrates can be used for the treatment of chronic heart failure. For side effects, hydralazine causes flushing, headache, edema, angina, and reflex tachycardia, so it should be given with beta blockers and avoided in individuals with coronary artery disease. It’s important to note that hydralazine can cause an autoimmune-like condition called drug-induced systemic lupus erythematosus. Finally, individuals who break down certain medicines at a very slow rate, known as slow acetylators, might experience hydralazine toxicity due to an accumulation of this medication in their body.

cGMP, or cyclic guanosine monophosphate, is a second messenger that mediates smooth muscle relaxation in response to various vasoactive agents such as nitric oxide (NO). cGMP-mediated smooth muscle vasodilators, are drugs that promote vasodilation by increasing the effect of cGMP. These drugs include hydralazine and nitroprusside, used to treat hypertension, and nitrates used to treat angina pectoris.