A 27-year-old man presents to his primary care doctor’s office after he felt a right testicular mass a week ago. He notes he has had a dull, intermittent ache in his groin for the past 2 months, which has had attributed to strenuous exercises as a personal trainer. His past medical history is significant for surgical correction of right-sided cryptorchidism at the age of 1. On physical examination, the patient’s right testicle is non-tender, but a firm and fixed mass is palpated. Transillumination is negative. An ultrasound of the right testicle demonstrates a heterogenous mass. Which of the following is the most appropriate next step? 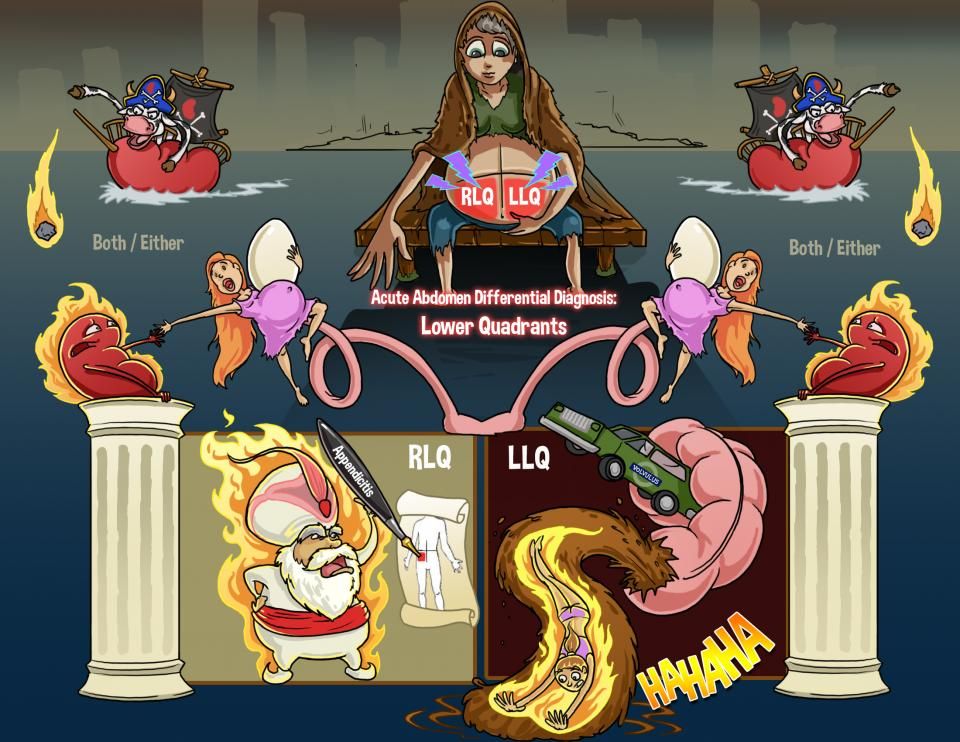 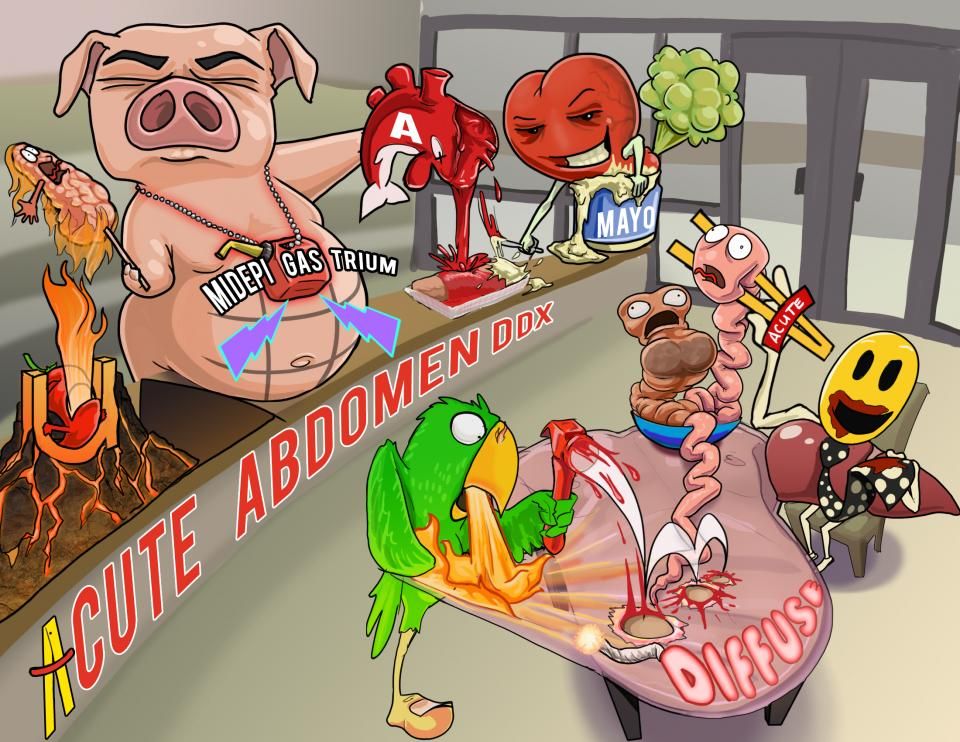 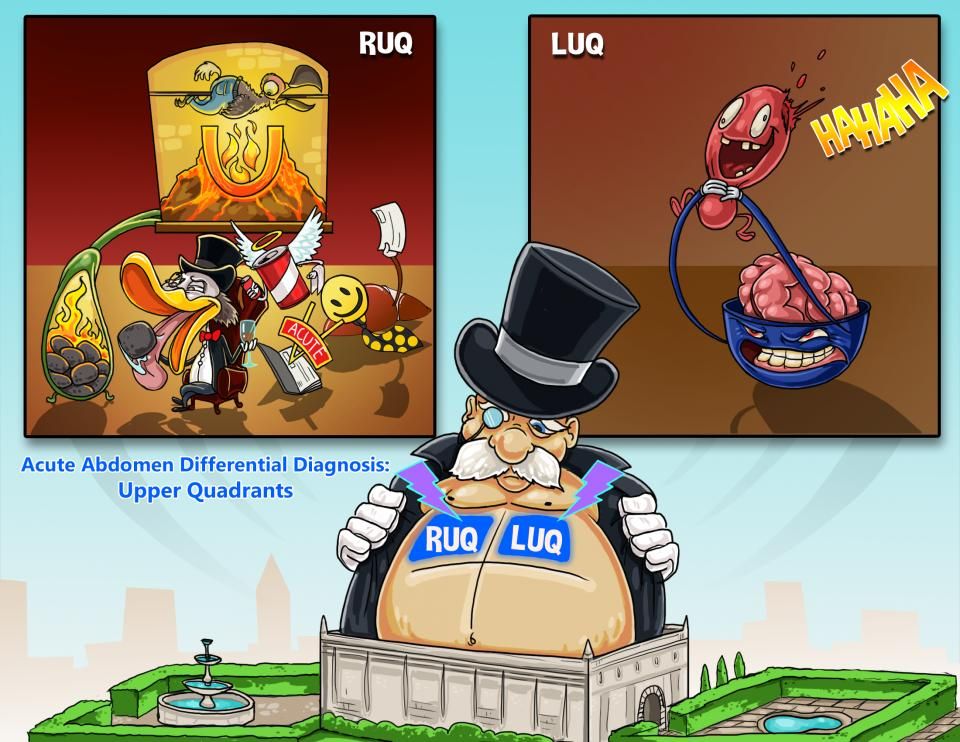 Abdominal pain is a very common complaint, and the differential diagnosis is wide, ranging from benign to life-threatening conditions.

There are three main types of abdominal pain: visceral, parietal, and referred pain.

Visceral pain happens when the nerves that run through the walls of an organ get stretched. The pain isn't usually well localized and feels like a dull ache or cramp.

Sometimes, as a disease evolves, visceral pain can become parietal pain, which is also called somatic pain. That’s the pain that results from irritation to the parietal peritoneal wall.

Parietal pain is sharp and can be localized by pointing to a specific spot.

Abdominal pain, can often be separated into the abdominal area that’s involved.

Foregut organs - so the stomach, duodenum, pancreas, and biliary tract - cause epigastric pain.

Epigastric pain that’s associated with bloating, abdominal fullness, heartburn, or nausea is called dyspepsia, and it’s generally due to gastroesophageal reflux disease, gastritis, pancreatitis, or peptic ulcer disease - meaning an ulcer of the stomach or duodenum.

Left upper quadrant pain can overlap with the causes of epigastric pain, such as pancreatitis which causes pain that radiates to the back, but may also be due to the spleen.

Right upper quadrant pain generally involves the liver or biliary tree, such as acute hepatitis, gallstones, or acute cholecystitis, but it may radiate to the back or epigastrium.

Midgut organs - so the rest of the small intestines, cecum, and appendix - cause periumbilical pain.

Another cause of periumbilical pain may be small bowel obstruction, which can cause vomiting, abdominal distention, and severe constipation.

There’s also mesenteric ischemia, which is when blood flow to the small intestines is interrupted, typically due to arterial or venous thromboembolism, and may cause severe pain and bloody stools, as well as progressive low blood pressure, rapid heart rate, and ultimately shock.

And finally, hindgut organs - so the rest of the large intestines, as well as the intraperitoneal portions of the genitourinary tract - cause pain in the suprapubic or hypogastric area.

In older adults, pain associated with a change in bowel habits and iron deficiency anemia can be the first signs of colorectal cancer.

Lower abdominal pain may also radiate down from upper abdominal structures or up from the pelvis, such as genitourinary causes like cystitis, pyelonephritis, ectopic pregnancy, or ovarian torsion.

Some conditions cause diffuse abdominal pain that can’t be localized.

A mixture of vomiting and diarrhea can be due to acute infectious gastroenteritis or toxin-mediated food poisoning.

On the other hand, celiac disease is generally associated with chronic diarrhea, malabsorption, and in children it can cause a growth delay.

A surgical emergency is an abdominal aortic aneurysm that has ruptured. This can cause pain that radiates to the back, and a pulsating sensation in the abdomen.

The mnemonic OPQRST can be used to help with history taking - especially regarding pain. O stands for onset, whether it was acute, gradual, or an ongoing chronic problem.

P stands for provocation and palliation, so whether any movement, pressure, rest, or other factors make the pain better or worse.

Q stands for quality, whether the pain is sharp, dull, crushing, or burning. It also relates to the pattern, like intermittent, constant, or throbbing.

R stands for region and radiation, meaning the location, or where the pain is on the body, and whether it radiates or extends to any other areas.

S stands for severity, which can be quantified with a score on a scale of 0 to 10 - 0 being no pain and 10 being the worst possible pain.

And finally, T stands for time, so how long the condition has been going on and if it has changed over time.

Associated symptoms can also help narrow the diagnosis. Common ones are nausea, vomiting, constipation, diarrhea, and changes in stool like the presence of blood or mucus, a foul smell, or changes in stool caliber.

In terms of vomiting, bilious vomiting may be caused by an obstruction distal to the duodenum, or there might be hematemesis from an upper gastrointestinal bleed.

A gastrointestinal bleed might also cause melena or hematochezia.

In females, it’s important to always rule out the possibility of pregnancy. Then, we should ask for genitourinary symptoms, such as dysuria, frequency, and hematuria - which can occur with a urinary tract infection or kidney stones.

Constitutional symptoms like fevers, chills, fatigue, and weight loss, would raise concern for an infection, malignancy, or systemic illness like inflammatory bowel disease.

And epigastric pain associated with cardiac risk factors or other symptoms like chest pain, cough, dyspnea, orthopnea, and exertional dyspnea suggest a pulmonary or cardiac cause.

To evaluate abdominal pain, the first step is inspection.

First, there’s the person’s general appearance and how they’re positioned given their pain. For example, if they’re perfectly still in bed with knees bent that’s concerning for peritonitis. Other features include how a person is breathing, signs of abdominal distention, and scars from past surgeries.

Next is auscultation to hear bowel sounds. Normally there are two to twelve medium-pitched gurgles per minute.