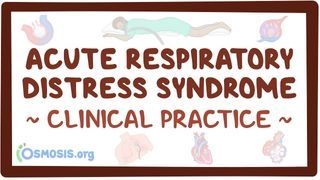 As a result, giving extra FiO2, doesn’t fully correct the hypoxemia, because blood passing by edematous alveoli simply aren’t participating in gas exchange. This means that the PaO2 doesn’t rise in accordance with FiO2, which decreases the PaO2 to FiO2 ratio, and the more alveoli are affected, the lower the ratio.