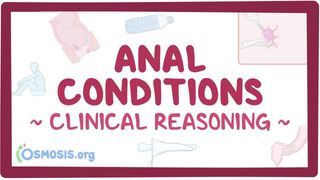 Hemorrhoidal disease is when hemorrhoids get swollen or inflamed; but the term "hemorrhoid" is often used to refer to the disease.

Hemorrhoids are often caused by chronically or recurrently increased abdominal pressure, from a variety of causes. For example, straining during bowel movements, chronic diarrhea or constipation, obesity, pregnancy, and old age.

Grade II hemorrhoids protrude outside the anus during bowel movement, but they retract spontaneously.

Grade III are prolapsed hemorrhoids that don’t retract spontaneously, but they can be pushed back in manually.

Finally, grade IV hemorrhoids are prolapsed hemorrhoids that cannot be manually pushed back in.

Internal hemorrhoids usually don’t cause symptoms, but sometimes they get inflamed, causing itching and painless passage of bright red blood with a bowel movement.

On the other hand, external hemorrhoids are innervated somatically, and they’re typically painful, especially when associated with thrombosed hemorrhoids, which have no blood flow due to a blood clot in the vein, and swelling in the affected area.

A diagnosis is usually made based on a visual and digital exam of the anus.

However, the internal hemorrhoids grade I and II lie inside the rectum, so they can’t be seen or felt, and confirmation requires anoscopy, which involves the insertion of a hollow tube-shaped device with a light attached at one end.

Thrombosed external hemorrhoids are tender and have a purplish hue.

Further testing with flexible sigmoidoscopy or colonoscopy is recommended if signs and symptoms suggest another digestive system disease and in individuals older than 40 years with symptoms of colorectal cancer, like weight loss and change in bowel habit - meaning a change in frequency, consistency, or in caliber of the stools.

Finally, individuals that have bleeding associated with their hemorrhoids may get venoactive agents or phlebotonics to increase venous tone of hemorrhoidal tissues and reduce bleeding.

Elastic bands are applied onto an internal hemorrhoid at least 5 millimeters above the dentate line to cut off its blood supply while avoiding any somatically innervated tissue. Within a week, the hemorrhoid tissue becomes necrotic and simply falls off.

Finally, there’s infrared cauterization which is commonly used for grade I or II internal hemorrhoids, and it’s usually only used for when other methods fail. It involves applying infrared light waves onto hemorrhoidal tissues, making a tiny burn to remove tissue and painlessly seal the end of the hemorrhoid. Within a week, the hemorrhoids generally dry up, shrink, and fall off.

Now for hemorrhoids that don’t improve with home-based and office-based procedures, and for internal grade IV hemorrhoids, or severely symptomatic external hemorrhoids, surgery may be needed.

An internal hemorrhoidectomy can be done in a few different ways.

In a conventional hemorrhoidectomy, the hemorrhoid is carefully excised from the superficial internal and external sphincter muscles.

Stapled hemorrhoidopexy is an alternative to conventional internal hemorrhoidectomy. It involves the removal of much of the abnormally enlarged hemorrhoidal tissue, followed by a repositioning of the remaining hemorrhoidal tissue back to its normal anatomical position. The device also interrupts part of the hemorrhoidal blood supply, thereby decreasing vascularity.

A final alternative is Doppler-guided transanal hemorrhoidal artery ligation, which uses a specially designed proctoscope housing a Doppler transducer to identify each hemorrhoidal arterial blood supply, which is subsequently ligated.

Following surgery, pain can be controlled with NSAIDs and warm sitz baths.

In addition, increased dietary fiber of up to 25 grams for a female and 38 grams for a male with fruits, vegetables, and grains, as well as staying hydrated by drinking about 2 liters of fluids per day can help reduce postoperative constipation and pain with defecation.

So some fissures are acute, lasting less than 8 weeks, whereas others become chronic, lasting for more than 8 weeks.

Sometimes, there are fissures in both the anterior and posterior midline, and these are called "kissing fissures".