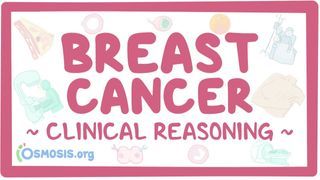 It’s the most common cancer in women, but can rarely affect men as well.

Now, estrogen and progesterone stimulate breast cells to grow and divide, and exposure to them over long periods of time increases the risk of breast cancer.

More menstrual cycles over a lifetime means a higher cumulative exposure to these hormones. That’s why factors that increase the number of menstrual cycles increases the risk of breast cancer.

That includes things like early menarche, or a first menstrual bleeding before 11 years of age, and late menopause, after 54 years of age.

On the flip side, some factors that are associated with fewer lifetime menstrual cycles - like pregnancy and a longer time breastfeeding - decrease the risk of breast cancer.

Another risk factor is exposure to ionizing radiation, like from chest X-rays and CT scans or previous radiation therapy for other cancers located in the chest.

Breast cancer has been linked to mutations in tumor suppressor genes, like BRCA1, BRCA2, and TP53, which normally prevent uncontrolled cell division.

Some breast cancers have mutations in the ERBB2 gene which causes an increase in human epidermal growth factor receptor 2, or HER2, which promotes cell division.

Finally, some breast cancer cells have estrogen or ER receptors and progesterone or PR receptors, which allow them to divide faster in the presence of these hormones.

Breast cancer is the second leading cause of cancer deaths in women after lung cancer, and this is largely due to the fact that breast cancers often don’t cause pain or discomfort until they’ve metastasized.

In fact, it’s led to a higher rate of breast biopsies that shows benign disease, and leads to some women doing it instead of mammography.

Nevertheless, some women who feel safer doing a breast self-exam should learn the proper technique.

The best time for breast self-exam is during the week after menstruation ends, or any time of the month for postmenopausal women.

The first thing to do is to stand in front of a mirror and check the breasts for any changes in skin color or texture, dents, and the appearance of the nipples, as well as signs of breast asymmetry.

Next, the woman should lie down, and use one hand to examine the breast on the opposite side, starting in the upper breast near the armpit and going up and down, and slowly moving across the breast.

Using the three middle fingers, she should make small circles to feel into the breast. Once one side is done, she should change hands and feel the other breast.

Other characteristic signs of breast cancer include skin retraction and ulceration, or an inverted nipple.

Now, in the general population, the recommendation is mammography screening for women over age 40.

For women between 40 to 49 years, the screening frequency is variable, with some recommending annual screening to identify aggressive breast cancers that can occur in this age group.

Women aged 50 to 74 should get mammographic screening once every two years, and women older than 75 years should continue screening only if their life expectancy is over 10 years.

If mammographic screening identifies an abnormality then the next step is supplemental mammographic views or an ultrasound.

Now, for high-risk women, meaning those who have a BRCA gene mutation or other susceptibility genes, or women with a history of chest radiation, should have an annual screening breast MRI.

If they can’t have an MRI, then a screening ultrasound is recommended.

These women still get annual mammography, so they effectively get one screening test every six months.

DCIS often has calcifications which can be spotted on mammography.

Then there’s lobular carcinoma, which again begins as lobular carcinoma in-situ, or LCIS, and that’s where clusters of tumor cells grow within the lobules, without invading the ducts, causing the affected alveoli to enlarge.

Also unlike DCIS, LCIS rarely has calcifications, so it’s not recognizable by mammography, but it is recognized with ultrasound.

A rare and aggressive form of breast cancer is inflammatory breast cancer, which occurs when malignant cells block the lymph vessels in the skin of the breast.

Inflammatory breast cancer is different from other forms of breast cancer because it usually doesn’t cause a lump or mass, so it’s particularly tricky to diagnose.

Initial symptoms include itching, pain, swelling, nipple inversion, warmth and redness throughout the breast, and peau d'orange, which is when the skin has the appearance and dimpled texture of an orange peel due to cutaneous lymphatic edema.

The signs of more advanced disease include axillary lymphadenopathy, as well as Paget's disease of the breast, which causes skin changes like redness, discoloration, and mild flaking of the nipple skin - resembling eczema.

As Paget's disease of the breast advances, symptoms include tingling, itching, increased sensitivity, burning, pain, and even bloody discharge from the nipple.

Any of these symptoms should trigger mammography and breast ultrasound - and the preferred modality depends on the breast consistency which is largely determined by a women’s age.

In women over 30, mammography is the preferred first imaging technique.

Mammography shows tumors that have calcifications and key findings are spiculated soft tissue masses and microcalcifications.

Unfortunately there are some tumors that don’t have calcifications - called mammographically occult disease, and there are also some aggressive cancers that develop quickly between mammograms called interval cancers.

In women under 30, a breast ultrasound is the preferred first imaging technique.

The ultrasound helps differentiate between solid and cystic breast masses.

If the ultrasound is indeterminate, mammography is often performed, although it’s less effective in young women.

Now, regardless of imaging results, all palpable breast lumps must get their cytology and histology done to confirm the diagnosis.

In addition, lymph node involvement must always be assessed with lymph node biopsy.

Cytology is done through fine needle aspiration or FNA, where fluid from the lump and suspicious lymph nodes is taken under ultrasound or mammographic guidance.

Histology is done with a core biopsy, where a needle is used to obtain a sample of tissue from the lump.

Generally, a percutaneous palpation-guided or imaging-guided biopsy is done. If that’s not feasible, then a surgical biopsy can be done.

Histologic testing for ER and PR expression, as well as for overexpression of human epidermal growth factor 2 or HER2 receptors is done.

Additionally, an MRI can be done - and is particularly helpful in females with breast prosthesis.

Nearly all invasive breast cancers enhance on gadolinium contrast-enhanced MRI, even ones that are not evident on physical examination, mammogram, or ultrasound.