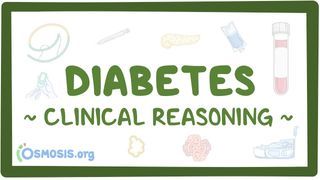 In diabetes mellitus, the body has trouble moving glucose from your blood into the cells – so blood sugar levels are constantly high.

In type I diabetes the blood glucose stays high because of an autoimmune destruction of the pancreas, which leads to low insulin levels.

In type II diabetes, the body makes insulin, but the cells are insulin resistant - meaning they don’t “respond” to insulin by taking glucose in.

Cells’ inability to use insulin translates in classical symptoms of diabetes like polyuria – individuals pee a lot -, polydipsia – they drink a lot of water -, sometimes polyphagia – they eat a lot – and unexplained weight loss.

Both type I and type II diabetes get these symptoms – however, with type I, the onset is usually abrupt and usually affects people under 30.

With type II, the symptoms gradually worsen over a few months, and individuals usually have risk factors like being over 45 years old, having a first degree relative with type II diabetes mellitus, a body mass index (BMI) over 25, a sedentary lifestyle, or cardiovascular disease, like hypertension.

Now, type II diabetes accounts for about 90% of the diabetes cases, so let’s start there.

A second test is a non-fasting or random glucose test which can be done at any time, with 200 milligrams per deciliter or higher being a red flag for diabetes.

Third, we have the oral glucose tolerance test, and it’s where a person is given 75 grams of glucose, and then blood samples are taken at time intervals to figure out how well it’s being cleared from the blood. At the time interval of 2 hours later, a level of 140 milligrams per deciliter to 199 milligrams per deciliter indicates prediabetes, and a level of 200 or above indicates diabetes.

However, these three tests have one shortcoming - they only show what’s happening to blood glucose levels in that particular moment in time, so we have no idea how long blood sugar levels have been high. This is where our fourth test comes in - the HbA1c, which is the proportion of glycated hemoglobin in the blood.

When blood glucose levels stay high for too long, glucose begins to stick to proteins that are floating around in the blood or in cells - like hemoglobin.

Since red blood cells - and hemoglobin - typically hang around in the blood for up to 4 months, this test reflects blood glucose levels over the past few months.

These tests can be used to diagnose and screen people for type II diabetes.

Guidelines recommend that screening begins at 45, using either the fasting blood sugar or a HbA1c test.

If screening is negative for both diabetes and prediabetes, one of those tests should be repeated every 3 years.

Now, with type I diabetes, catching it early is nearly impossible because symptoms don’t appear until 90% of the insulin secreting cells have been destroyed.

So individuals with type I diabetes typically present with sudden onset of polyuria, polydipsia, polyphagia and unexplained weight loss, as well as high blood sugar.

In order to differentiate type I from type II diabetes, we need to look for autoantibodies directed at glutamic acid decarboxylase - or GAD antibodies and islet cells - or IA2 antibodies.

GAD antibody levels typically remain persistently high, whereas IA 2 antibody levels decrease about 6 months after disease onset. To remember which is better, you might think GAD is GOOD, while IA 2 comes in second.

In both type I or type II diabetes it’s important to think about chronic diabetic complications.

In the eyes, diabetes can lead to retinopathy and evidence of that can be seen on a fundoscopic exam that shows cotton wools spots or flare hemorrhages - and can eventually cause blindness.

In the kidneys, the afferent and efferent arterioles, as well as the glomerulus itself can get damaged which can lead to diabetic nephropathy. For this, a urine sample is used to screen for proteinuria, the presence of which reflects small vessel damage.

Finally, nerve damage causes a decrease in sensation in the toes and fingers, sometimes called a stocking-glove distribution, as well as causing the autonomic nervous system dysfunction, affecting everything from sweating to passing gas.

Finally, both the poor blood supply and nerve damage, can lead to foot ulcers that don’t heal quickly and can get pretty severe, and require amputation.

Now, in terms of treatment, there are three clinical scenarios - prediabetes, type II diabetes and type I diabetes.

For prediabetic individuals, the goal is to bring the HbA1c levels below 5.7% - and to do this, recommendations are mainly lifestyle changes over a 16 week trial period - like losing weight, sticking to a healthy diet, exercising and quitting smoking.

Specifically, we’re talking about losing 7% of total body weight over 16 weeks - which can be done by decreasing caloric input by 500-1000 kilocalories per day, depending on starting weight, and sticking to a diet rich in fruits and vegetables, and low in sugar-sweetened beverages and processed sweets, and also low in saturated fats, like those found in meat and dairy products. So less of the fast-food style soda, hamburgers, and fries, and more home cooked meals like roasted vegetables over lentils and rice - which is also cheaper as well!

Finally, exercising means gradually increasing physical activity up to at least 30 minutes a day, at least 5 days a week - brisk walking, jogging, swimming, going to the gym, you name it - it gets the blood flowing, it’s good.

In addition, sometimes Metformin, a biguanide, is started in these individuals. Metformin works by making cells respond better to insulin - therefore decreasing insulin resistance. Unfortunately, metformin can cause nausea and diarrhea, and can rarely cause lactic acidosis, particularly in individuals with chronic kidney disease and severe heart failure - so metformin is contraindicated in those settings. Metformin can also deplete vitamin B12 levels, which can lead to anemia. So individuals on Metformin need to get B12 levels checked and need supplementation if they’re low. They also need a complete blood count - or CBC - with each evaluation, to track changes in hemoglobin and hematocrit.

For type II diabetes - the approach depends on HbA1c level.

For HbA1c levels between 6.5%, and 10% - the initial approach is the same as prediabetes - lifestyle changes and Metformin. Metformin is available in 500, 850 and 1000 milligram tablets, and therapy usually starts with a 500 mg tablet once daily with the evening meal. If well tolerated, a second 500 mg tablet can be added with breakfast. Doses can be increased by one tablet once every one to two weeks, up to the usual effective dose of 1500-2000 milligrams per day. However, follow-up is a bit more intensive here - so HbA1c levels are checked again every 3 months, and generally speaking the goal is to keep the HbA1c below 7%.

If the HbA1c is still higher than 7% after 3 months of Metformin, a second antidiabetic medication is usually used, and there are several options to choose from. Which one is best depends on several individual factors - like whether or not the person is overweight, has chronic kidney disease or severe heart failure, or atherosclerotic cardiovascular disease - defined as coronary heart disease, cerebrovascular disease, or peripheral arterial disease presumed to be of atherosclerotic origin.

It’s also important to factor in the risk for hypoglycemia that some of these medications pose.

Ok, so first, there are the sulfonylureas, like Glimepiride and Glipizide.

These medications increase the amount of insulin that the pancreas naturally releases, but they can cause hypoglycemia as well as weight gain. As a result, individuals should take these medications 30 minutes before a meal.

Next up, are the thiazolidinediones, like pioglitazone, and they help reduce insulin resistance, like Metformin, as well as hepatic gluconeogenesis - meaning they make the liver make less glucose while fasting, overall lowering blood sugar.

However, these medications can also cause weight gain and are contraindicated in individuals with severe heart failure. On the flip side, studies have shown that they could improve cardiovascular health in people with atherosclerotic cardiovascular disease.

Next are the SGLT-2 inhibitors, like dapagliflozin, which inhibit a sodium-glucose cotransporter in the kidneys, leading to increased urinary excretion of glucose, and lower blood glucose levels.

These drugs help with weight loss, and they have also demonstrated beneficial effects on cardiovascular health in people with atherosclerosis. However, they are contraindicated in people with severe chronic kidney disease. Also, there is a minor risk for hypoglycemia, in case too much glucose is lost in the urine.

Finally, there are two other classes of antidiabetic medication, both of which are injected subcutaneously. These are glucagon-like peptide-1 or GLP-1 analogues and dipeptidil peptidase 4 or DPP-4 inhibitors.

GLP-1 is a hormone secreted by the gastrointestinal tract after a meal, that decreases glucagon levels, and increases insulin production - causing blood sugar levels to fall.

DPP-4 is the enzyme that degrades GLP-1 in between meals.

So GLP-1 analogues, also called incretins, act like GLP-1 and lower blood sugar and cause weight loss - however, they are contraindicated in severe chronic kidney disease. Examples of incretins are Exenatide and Liraglutide.