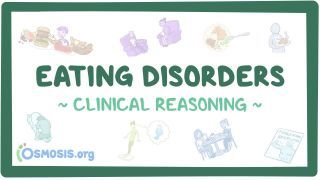 Eating disorders are extremely common and while in many cultures there is a misconception that they only affect women, they can, in fact, affect anybody regardless of gender or sex, but most often occur in teenagers who struggle with low self-esteem and the social pressure to look a certain way.

Bullying, loneliness, and childhood trauma are all linked to eating disorders, as well as a socially-defined “ideal body” perpetuated by social and traditional media.

According to DSM-5, the most common eating disorder is anorexia nervosa.

Besides that, there are seven other conditions which include bulimia nervosa, binge-eating disorder, then rumination, avoidant/restrictive food intake disorder, and finally pica.

First, individuals must eat less than their daily requirement to survive based on their age, sex, and level of activity - which leads to a low Body Mass Index or BMI.

Second, individuals have a constant fear of gaining even a small amount of weight or having persistent habits that prevent weight gain.

And third is having a distorted impression of their body, with individuals often believing that they are overweight, while actually being underweight.

People who meet all the criteria for anorexia except that they are within or above the normal weight range after significant weight loss can be diagnosed with atypical anorexia nervosa.

Over time individuals with anorexia can starve - leading to muscle loss, osteoporosis, low levels of electrolytes like potassium, magnesium, and phosphate, bloating, and constipation.

Now in addition to food restriction, individuals often have other behaviors, like purging, over-exercising, and doing frequent weight checks.

They might perform specific food rituals, like cutting food into small pieces, or eating foods in a specific order.

They might also refuse to eat in front of other people, or cook elaborate meals for others, but then not eat themselves.

Now, there are two main types of anorexia.

One is the restricting type, where people reduce the amount of food they eat in order to lose weight without the help of any aid like diuretics or laxatives.

The other is the binge-eating and purging type, where at least once in three months, individuals eat large amounts of food in one sitting and then purge that food through vomiting or by taking laxatives.

Next, there’s bulimia nervosa, which is characterized by binge eating and purging which happens at least once a week for three months, but in most cases it happens daily.

The key distinction with anorexia is that people with bulimia have a BMI that’s normal or high, so it’s over 18.5.

As a result, people can more easily hide the fact that they have bulimia.

Sometimes, individuals start with bulimia, and then develop anorexia over time.

Often times, the trigger for binging and purging is not reaching a certain goal like having perfect grades. And these goals are not always related to weight or body image.

In addition to binging and purging, some individuals reduce the amount of food they eat, exercise aggressively, or use diuretics and other medications to lose weight.

That’s where individuals are overwhelmed by the urge to eat and are unable to stop eating, at least once a week for three months.

Unlike in bulimia or anorexia, the episodes are not followed by compensatory purging, fasting, and excessive exercising.

Individuals often end up feeling ashamed, disgusted, or distressed, and they often eat alone, so that others can’t see how much they end up eating.

Fourth, there’s rumination disorder where individuals regurgitate food back into their mouth, repeatedly over at least one month.

Some individuals re-chew and re-swallow the food, while others spit it out.

Rumination disorder is different from anorexia and bulimia because individuals aren’t doing it purposefully and have no specific desire to lose weight.

It’s important to rule out other conditions like gastroesophageal reflux and pyloric stenosis.

In gastroesophageal reflux, the heartburn is improved by proton pump inhibitors, and in pyloric stenosis an ultrasound shows a thickened, elongated pylorus.

Fifth, there’s avoidant or restrictive food intake disorder which is where people aren’t interested in food, or avoid it because they think it smells or tastes bad.

In some cases, people aren’t interested in food, and may simply forget to eat. In other cases, people become very restrictive about their food intake because they are concerned about specific health issues like cancer or infertility.

The key is that it has to lead to a person not being able to meet their nutritional or energy needs, and has to be associated with one or more of the following four symptoms: significant weight loss, important nutritional deficiency, dependence on enteral feeding or oral nutritional supplements, and impairment in all areas of life.

Finally, this behavior can’t be due to lack of food, because of a tradition or religious practice, or because of another mental disorder.

Sixth, there’s pica, which is where people have strong cravings and begin to eat non-food bizarre items like dirt, clay, or feces, for at least one month.

The behavior also has to be culturally inappropriate, because in some countries eating non-edible things are part of traditions- for example, ingesting kaolin - a type of white clay - is common in parts of Africa. Also, mud ingestion is something that’s done in some parts of India.

The diagnosis shouldn't happen in the context of another mental health condition like schizophrenia or autism.

For example, in anorexia, individuals will eat substances like paper tissues, but they usually do it to control their appetite, and not because they crave them.

If an individual meets some, but not all, of the criteria for eating disorders, and they have a symptom that stands out, then they can be diagnosed with “other specified eating disorder”.

If there’s isn’t a specific stand out symptom, then the diagnosis is “unspecified eating disorder”.