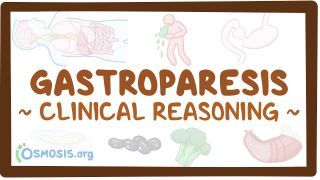 The gastrointestinal system depends on the coordination of the sympathetic and parasympathetic nervous systems, pacemaker cells and neurons within the walls of the stomach and intestine, and the smooth muscle in the gastrointestinal walls. If any part is disturbed, then it can lead to gastroparesis, which is delayed gastric emptying in the absence of a mechanical obstruction.

Gastroparesis is usually idiopathic, but it’s associated with a number of diseases like diabetes mellitus, hypothyroidism, neurological conditions like Parkinson’s disease, viral infections, or even an autoimmune attack.

Individuals with gastroparesis can have symptoms like nausea, vomiting, upper abdominal pain, early satiety, bloating, and in severe cases, unintentional weight loss. On physical examination, there’s usually epigastric distention or tenderness in the upper abdomen, but without guarding or rigidity.

When gastroparesis is suspected, individuals should undergo an upper endoscopy to make sure that there’s no mechanical obstruction.

Now, to establish the diagnosis of gastroparesis, a scintigraphic gastric emptying test should be done.

For the test to be accurate, glucose levels should be lower than 275 milligrams per deciliter. Then the individual usually ingests a low-fat egg-white meal and a tasteless radioactive material, usually Technetium, which shows up on the scintigraphy. Imaging is performed immediately after the ingestion and then again at two, and four hours after ingestion.

Once the diagnosis of gastroparesis is established, it’s important to investigate the underlying cause.

Lab tests include hemoglobin to check for anemia, especially if malignancy is suspected, fasting plasma glucose, serum total protein, albumin to assess for malnutrition, in individuals that have unintentional weight loss, TSH to check for hypothyroidism, and an antinuclear antibody or ANA to search for an autoimmune disease.

In individuals with diabetes mellitus, HbA1C is also taken to assess glycemic control.

If the individual has a history of smoking, then ANNA-1 or anti-Hu antibodies are also obtained, because gastroparesis may also appear as a paraneoplastic syndrome, particularly with lung cancer.

Next, it’s important to differentiate a myopathic process- a disorder of the skeletal muscles- such as scleroderma, from a neuropathic process- a disorder of the nervous system- like diabetes. That can be done with gastroduodenal manometry which is where a pressure-sensitive tube is endoscopically placed through the nose and into the small intestine for 1 or 2 hours.

Treatment of gastroparesis is generally based on dietary modifications and avoiding medications that delay gastric emptying.

Dietary modifications that can help are eating smaller, more frequent meals, up to 5 times per day, that are low in fat and contain soluble fiber, like black beans or broccoli. That’s because both fat and insoluble fibers such as oats delay gastric emptying. Carbonated drinks, alcohol, and smoking should also be avoided for the same reason.

Individuals with mild gastroparesis are told to focus on good hydration and are often given vitamin supplementation. If the individual is unable to tolerate solids, then vitamins are added to liquid meals.