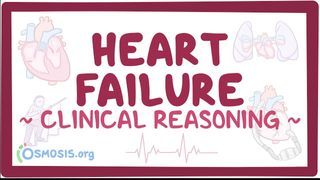 Heart failure is when the heart can’t supply enough blood to meet the body’s demands.

A variety of heart diseases like ischemia and valvular disease can impair the heart’s ability to pump out blood, and over time can lead to heart failure.

In both cases, blood backs up, causing congestion or fluid buildup, which is why it’s also often called congestive heart failure.

All right, so the heart needs to squeeze out a certain volume of blood each minute, called cardiac output, which is the heart rate - or the number of beats in a minute - multiplied by the stroke volume – or the volume of blood squeezed out with each heartbeat.

Then the ejection fraction is the portion of blood that’s pumped out of the left ventricle- in other words the stroke volume divided by the total left ventricular volume.

That’s where the heart has very thick ventricular walls so that the chamber doesn’t get an adequate load of blood, so the heart is squeezing hard enough but not filling up enough.

In this case, the stroke volume is low, but the ejection fraction is normal.

With left ventricular or left sided heart failure, blood gets backed up into the lungs, and that causes pulmonary hypertension and pulmonary edema.

Because of differences in diffusion rates, all the extra fluid makes oxygenation harder, but ventilation of carbon dioxide still works pretty well.

Patients often have dyspnea, as well as orthopnea or difficulty breathing when lying down flat. That’s because lying flat allows more venous blood to flow back to the heart and into the pulmonary circulation -worsening the congestion.

All this extra fluid in the lungs causes crackles or rales on auscultation.

A sign of severe left ventricular systolic failure is pulsus alternans, which is when there’s alternating strong and weak peripheral pulses.

This occurs because the ejection fraction is significantly decreased, which in turn causes a reduction in stroke volume, so more blood will remain in the ventricle.

As a result, during the next systole, the myocardial muscle will be stretched more than usual, leading to an increase in myocardial contraction and a stronger systolic pulse.

Now with right ventricular or right sided heart failure, blood gets backed up in the body.

That can cause jugular venous distention, which can be seen with the patient sitting at 45 degrees as the jugular vein having a fluid wave that represents the filling level.

Normally it should be less than 3 centimetres vertical height above the sternal angle, but in heart failure it goes higher than that.

Blood can also back up into the liver and the spleen, and both can get enlarged.

Excess fluid can also move into the interstitial spaces near the surface of the liver and spleen, and collect in the peritoneum, causing ascites.

Finally, fluid that backs up into the interstitial spaces within soft tissues in the legs causes pitting edema.

That’s where applying pressure with a finger leaves a pit in the tissue for a few moments.

This mostly affects the legs, because gravity causes most of the fluid to “pool” there.

Now, if the ventricles are stiffened or dilated, eventually the atria will also undergo remodeling to adapt to the higher filling pressures.

For this reason, in heart failure, there’s often a third heart sound or S3 heard on auscultation, which occurs after S1 and S2.

Finally, in advanced heart failure, there’s decreased tissue perfusion leading to a resting sinus tachycardia, cool, pale, sometimes cyanotic extremities, and diaphoresis or excessive sweating due to hypotension, as well as narrow pulse pressure due to the drop in ventricular stroke volume.

On a chest X ray there might be changes like pulmonary edema or cardiomegaly, but there are no specific signs that point directly to heart failure.

On an ECG, there might be clues about the underlying cause of heart failure like an arrhythmia or evidence of coronary artery disease.

In a patient with any type of congestive heart failure, the key lab value is the brain natriuretic peptide or BNP.

BNP levels can also be used to monitor a response to treatment as well.

Echocardiography is then done to confirm the diagnosis of heart failure.

It can estimate the ejection fraction, as well as measure ventricular wall and chamber size which helps distinguish systolic versus diastolic heart failure.

It can also assess the heart valves and estimate the pulmonary arterial pressure, to help identify causes and effects of the heart failure.

Finally, a cardiac catheterization is the insertion of a catheter into a chamber, valve, or vessel of the heart.

This can be done to measure the pressure in the chambers, study valvular function, and can be used to inject contrast media into the ventricles to perform ventriculography, which measures the ejection fraction.

In addition, a coronary angiogram can be done to assess the coronary circulation to look for evidence of myocardial ischemia.

After diagnosing heart failure, it should be classified.