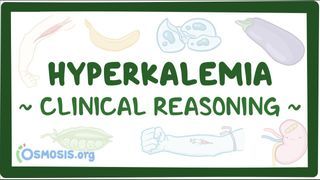 With hyperkalemia, there’s too much potassium in the extracellular fluid, generally over 5 mEq/L.

Common causes include metabolic acidosis; a hyperglycemic hyperosmolar state; the use of medication, like potassium sparing diuretics; and tissue breakdown, like with a crush injury.

In addition, individuals with acute or chronic kidney disease, can develop hyperkalemia when there’s a high potassium intake.

Hyperkalemia is often asymptomatic, but it can cause symptoms like palpitations, paresthesias, and muscle weakness.

Ultimately if hyperkalemia is severe enough, it can lead to a flaccid paralysis that starts in the lower extremities and ascends upward.

In addition, severe hyperkalemia can affect renal function - causing a person to become oliguric- meaning their daily urine output can fall below 400 milliliters.

Whenever potassium levels are above 5 mEq/L, the first to do is an EKG.

If the EKG is normal and the individual doesn’t have symptoms of hyperkalemia, and if there’s no apparent cause of hyperkalemia, then it may be due to pseudohyperkalemia. This happens when potassium moves out of the cells during or after a blood draw.

For example, potassium gets released from muscle cells during muscle contraction, so if a person repeatedly clenches their fist during the blood draw, then potassium levels can rise - in fact, they can go up by up to 2 mEq/L in that forearm!

Also during blood drawing, some of the red cells can be harmed and release potassium.

Pseudohyperkalemia can also happen when there’s thrombocytosis or leukocytosis.

For example in chronic lymphocytic leukemia, the lymphocytes are frail, so they break easily and release potassium. The key is to simply repeat the serum potassium level and to obtain a CBC.

If pseudohyperkalemia is ruled out, then there’s a true hyperkalemia.

There may be EKG changes, but they don’t always correlate with the severity and progression of hyperkalemia.

Oftentimes, a potassium level between 6 and 7 mEq/L, will cause peaked T waves with a narrow base in the precordial leads V1 through V6.

A potassium level between 7 and 8 mEq/L, can cause even taller T waves and a prolonged PR interval- so a first degree atrioventricular block, flattened P waves, a depressed ST segment, and a wide QRS complex.

When the potassium level goes above 8 mEq/L, the T waves get even taller, the QRS complex gets wider, and there’s no P wave anymore.

Eventually the EKG shows a sinusoid wave pattern, and a person can die of ventricular fibrillation.

But given that these cardiac changes don’t align perfectly to the level of hyperkalemia, everyone with hyperkalemia should be continuously monitored because ventricular fibrillation can occur anytime.

In addition to an EKG, a basic metabolic panel is done to identify the cause of hyperkalemia.

In renal impairment, the BUN levels can go above 20 milligrams per deciliter.

Based on creatinine, age, gender and sometimes weight and height, the estimated Glomerular Filtration Rate or eGFR is calculated.

With a hyperglycemic hyperosmolar state, glucose levels as high as 800 milligrams per deciliter.

In order to find the cause of metabolic acidosis, the anion gap will be calculated using serum sodium, chloride, and bicarbonate.

One cause of metabolic acidosis is diabetic ketoacidosis, and typically the glucose levels are above 350 milligrams per deciliter.

Now, if an individual has symptoms or EKG changes or if serum potassium is over 6.5 mEq/L, then treatment is started right away.

Another emergency is when the serum potassium is between 5.5 mEq/L - 6.4 mEq/L and the person has renal impairment and ongoing tissue breakdown- like in the aftermath of a crush injury.

After the initiation of therapy, serum potassium needs to be monitored every 2 hours.

Individuals should be given IV calcium gluconate- 10 milliliters over 3 minutes in order to protect the cardiac muscle, and this can be repeated every 30 to 60 minutes if hyperkalemia persists.

Rapid acting therapies can help move potassium back into the cells. This doesn’t lower total body potassium, but moving the potassium out of the serum and into the cells, helps to stabilize the cardiac muscle.

One way to do this, is to give 10 to 20 units of regular insulin in 500 milliliters of 10% dextrose intravenously over 60 minutes. The effect of insulin begins in 20 minutes and can last for 6 hours and over that time the potassium can drop by 0.5 to 1.2 mEq/L.

Blood glucose is measured every hour for about 6 hours after initiation of insulin therapy.

In addition, beta 2 adrenergic agonists like nebulized albuterol can be given to help shift potassium into the cells.

In metabolic acidosis, the body tries to raise the pH, by getting the excess hydrogen ions to enter the cells. That’s done by exchanging them with potassium ions which leave the cells and enter the blood to maintain electroneutrality- resulting in hyperkalemia.

So in hyperkalemia, if there’s associated metabolic acidosis with a pH level below 7.1, then sodium bicarbonate can be given as well.

Now, to remove potassium from the body there are a few options. In individuals without renal impairment, loop diuretics- such as furosemide- can be used to dump more potassium into the urine.

To prevent dehydration in euvolemic or hypovolemic individuals, isotonic saline solution can be used.

In individuals with impaired renal function, furosemide can be dose-adjusted for renal function and can be given with isotonic saline solution.

Another option for removing potassium is the use of gastrointestinal cation exchangers.

One exchanger is Patiromer which binds potassium in the colon in exchange for calcium, and can be given orally or through an enema.

If Patiromer is not available, then Kayexalate can be used instead.

Kayexalate binds potassium in exchange for sodium or calcium and can also be given orally or through an enema.

Finally, in individuals with severe renal impairment, hemodialysis may be needed.

Usually if dialysis cannot be done within 6 hours, then gastrointestinal cation exchangers are used until hemodialysis can be done.

Now, if serum potassium is between 5.5 to 6.4 mEq/L and the individual doesn’t have any symptoms or EKG changes, but does have severe renal impairment, then the potassium needs to be lowered within 12 hours and it can be done using hemodialysis.

Finally, if serum potassium is between 5 and 5.4 mEq/L and the individual doesn’t have any symptoms or EKG changes, then potassium can be lowered through dietary modifications.

These individuals should avoid foods that are rich in potassium- especially fruits- like bananas, oranges, watermelons and vegetables, like eggplants, peas, and potatoes. The one time when it’s not a good idea to eat all your fruits and vegetables - at least for a little while.

In addition, if the individual is hypertensive or hypervolemic, then loop diuretics can be used.