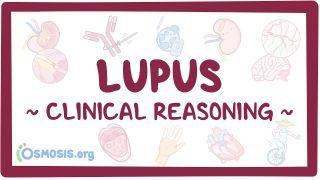 Systemic Lupus Erythematosus, or lupus, is an autoimmune disease, where essentially any tissue or organ can be the target of inflammation.

Often there are periods of illness, called flares, and periods of remission during which there are few symptoms.

The diagnosis of lupus is made when 4 or more out of 11 criteria are met.

The first three have to do with the skin.

Second is a discoid rash, which is chronic erythematous rash in sun-exposed areas like the arms and legs that are plaque-like or patchy redness and can scar.

Third, is a general photosensitivity of the skin — essentially a catch-all category for other rashes that happen to sun-exposed areas — typically only lasting a couple of days.

Lupus can also damage the inner membrane or mucosa of various tissues, so the fourth criteria is ulcers in the mouth or nose.

The fifth criteria is serositis which is inflammation of the serosa, which is like the outer membrane of an organ or tissue.

The sixth criteria is arthritis, and two or more joints have to get inflammed to meet the criteria.

The seventh criteria is evidence of kidney damage based on protein or cells in the urine.

It’s generally caused by lupus nephritis, which is a type of glomerulonephritis due to immune complex deposition along the glomerular basement membrane.

Lupus nephritis can ultimately lead to end-stage kidney failure, which is the leading cause of morbidity and mortality among individuals with lupus.

The ninth criteria is having autoantibodies against blood components causing cell destruction, and leading to conditions like anemia, thrombocytopenia, or leukopenia.

The final two criteria have to do with having specific antibodies in the blood.

The tenth criteria is having antinuclear antibody or ANA, which targets nuclear antigens.

The eleventh criteria is having one of three other autoantibodies.

The first is anti-Smith, which is an antibody against small ribonucleoproteins.

The second is anti-dsDNA, which is against double stranded DNA and is often seen more during flares, especially in individuals with kidney involvement.

These two are relatively specific for lupus.

The third type of antibody is antiphospholipid, which is actually an antibody that’s made against proteins that are bound to phospholipids, and is less specific for lupus, meaning that it can pop up in other situations.

There are three types of antiphospholipid antibodies.

The first is anticardiolipin, which can cause a false-positive test for syphilis since anticardiolipin antibodies are sometimes involved in syphilis.

The other two antiphospholipid antibodies are lupus anticoagulant also called lupus antibody, and anti-beta2 glycoprotein I.

Now, lupus can also cause additional symptoms that aren’t part of the diagnostic criteria.

There can also be vasculitis, which can manifest as palpable purpura, petechiae, panniculitis, skin ulcers, splinter hemorrhages, and livedo reticularis - which is where there’s a lace-like purplish discoloration of the skin.

Another vascular condition that can occur in lupus is Raynaud’s phenomenon, which is where arterial spasm causes reduced blood flow to the fingers.

Finally, lupus increases the likelihood of thromboembolic disease, specifically a blood clot can form in a blood vessel and then breakaway to plug up a smaller vessel in another organ like the lungs, brain, or kidneys.