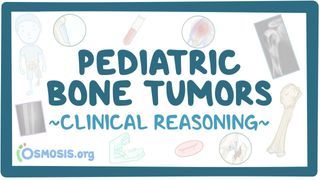 Osteosarcoma and Ewing's sarcoma are primary skeletal malignancies that can occur in children.

The tumors cause similar signs and symptoms, so the diagnosis is based on radiography findings and biopsy results.

Both bone tumors cause a dull, aching pain that is mostly non-responsive to NSAIDs or acetaminophen.

One particular aspect of the pain in bone tumors is that the initial mild pain becomes increasingly severe over a few months and sometimes gets worse at night.

Additionally, the site might be swollen and occasionally there can be pathologic fractures after seemingly minor trauma.

In osteosarcoma, the tumors are mostly on the metaphysis of a long bone like the femur or tibia, while Ewing’s sarcoma most frequently involves the diaphyseal or meta-diaphyseal regions of long bones like the femur, or the pelvis.

Other locations for these tumors include the hip, spine, chest wall, and for Ewing’s sarcoma, even soft tissues.

Usually there’s an isolated localized tumor, but some individuals also have pulmonary metastases, and that can happen for both Osteosarcoma and Ewing's sarcoma. In those situations, individuals can also have dyspnea or cough.

Finally, systemic symptoms such as fever, weight loss, and decreased appetite are quite rare.

If there’s suspicion of a bone tumor, the first step is local plain radiographs.

Let’s start with osteosarcoma which is a tumor derived from neuroectodermal tissue.

Plain films of the tumor site often reveal medullary and cortical bone destruction and a wide zone of transition with a moth-eaten appearance.

The associated soft tissue mass is variably ossified in a radial or "sunburst" pattern, which is characteristic for osteosarcomas, alongside Codman triangle which is a triangular area of new subperiosteal bone that is created when a tumor raises the periosteum away from the bone.

Laboratory evaluation is usually normal, except for elevations in alkaline phosphatase, lactate dehydrogenase, both of which are markers of increased bone turnover, and erythrocyte sedimentation rate in around half of the cases.

Laboratory abnormalities do not correlate with disease extent, although a very high LDH level is associated with a poor clinical outcome and a decrease of alkaline phosphatase during treatment is often interpreted as a “soft sign” of a response to therapy.

Next, CT or MRI is indicated if radiographs are reported as negative but symptoms persist or worsen.

And finally, core-needle biopsy with histological examination of tumor material is the definitive diagnostic test, which should be done after local staging has been completed using conventional radiographs, CT, and MRI.

Now, after diagnosis was confirmed, we also have to look for metastasis, mostly in the lungs and the skeleton.

Investigations that help with systemic staging include a chest x-ray, high-resolution spiral CT scans of the lungs and thorax, and a radionuclide bone scan to detect skip lesions and distant metastases.

Induction therapy lasts approximately 10 weeks and is followed by local surgery during week 11.

Following definitive resection or amputation, an additional 17 weeks of adjuvant chemotherapy with MAP is recommended.

Regarding surgery, the vast majority of malignant tumors of the long bones are treated with a variety of limb-sparing procedures that employ the use of prostheses, allografts, or autograft.

Rotationplasty is another option for patients as an alternative to amputation for skeletally immature patients with tumors of the femur.

This procedure consists of excising the distal femur with the objective of obtaining clear surgical margins.

And finally, recurrent disease and local and pulmonary metastasis can be managed with ifosfamide alone or in combination with etoposide.

Next is Ewing’s sarcoma plain radiographs of the primary site usually reveal the classic “onion skin” pattern osteolytic lesion, which characteristically extends through the cortex into the soft tissue.