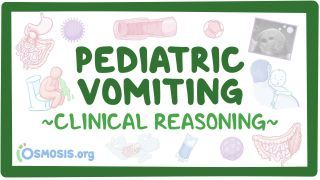 First looking at newborns or young infants, less than 3 months of age, it may be very common to spit up a little bit of milk or formula, usually within the first hour after being fed.

This is considered normal gastroesophageal reflux, or GER, and generally the vomiting is small-volume, non-projectile or not forceful, formula- or breast milk-colored, and the infant is looking healthy. It usually goes away on its own, but what can also help is feeding the baby in an upright position, burping it frequently during feeding breaks—meaning before switching breasts for breastfeeding moms and every 2 to 3 ounces for bottle-feeding moms—as well as after the baby is done eating, and avoiding active play right after feeds.

On the flip side, vomiting is considered pathologic when it occurs in large volumes, is projectile or has a green or bright yellow color given by bile, or when there are signs of illness, like fever, weight loss, or feeding refusal.

Pathologic vomiting can be caused by obstruction of the gastrointestinal tract.

Now, if the obstruction is after the junction of the duodenum with the bile ducts at the ampulla of Vater, then the vomiting is bilious. This may be caused by intestinal malrotation with volvulus, atresia or stenosis of the lower duodenum or intestines, or by Hirschprung’s disease.

In intestinal malrotation with volvulus, there’s twisting of the mesentery around the superior mesenteric artery leading to intestinal obstruction, infarction, and necrosis.

In fact, bowel infarction can also damage the intestinal wall and allow the bacteria in the gut to move into the body, which can cause sepsis.

Diagnosis is usually made with ultrasound or with an abdominal X-ray in an upright position, which will show distended loops of bowel with air-fluid levels. That’s followed by an upper GI contrast series, which shows a corkscrew-like or spiral shaped duodenum in the right lower quadrant instead of the left upper quadrant.

Management starts with discontinuing feedings, fluid resuscitation with normal saline, nasogastric tube decompression, and broad spectrum IV antibiotics, like vancomycin or 4th generation cephalosporins, to treat sepsis. Emergency surgery, known as a Ladd procedure, should be performed, which is where necrotic bowel is resected and reoriented within the abdominal cavity.

Next, there’s intestinal atresia or stenosis, which is when some portion of the intestine is absent or narrowed.

Duodenal atresia is typically a result of a failure of recanalization of the duodenum in utero and it’s commonly associated with trisomy 21, or Down syndrome.

Non-duodenal atresias, on the other hand, like those affecting the jejunum, ileum, or even the colon, are thought to be caused by lack of blood flow, to the developing gut.

Now, signs of atresia are usually present long before birth.

Since the fetus is less able to swallow amniotic fluid, more of it sticks around in the amniotic sac, which is called polyhydramnios and is detected on a prenatal ultrasound. In this situation, a baby may have bilious vomiting soon after birth.

Diagnosis is usually made with ultrasound or with an abdominal X-ray in an upright position, in which duodenal atresia will appear as a “double-bubble”, with no air in the distal bowel. This is the result of the distended stomach and duodenum being separated by the muscular pyloric valve.

Instead, jejunal atresia might have a “triple-bubble” appearance, in which the third bubble is caused by distention of the proximal jejunum.

The definitive treatment of intestinal atresia, though, is the surgical removal and repair of the affected segment. In the case of duodenal atresia, this is called a duodeno-duodenostomy, since you’re attaching duodenum to duodenum. Typically, prognosis following surgery is very good.

Next, there’s Hirschsprung’s disease, also known as congenital aganglionic megacolon. Here, the ganglia, or clusters of nerves of the myenteric or Auerbach’s plexus and the submucous or Meissner’s plexus, which normally coordinate smooth muscle contraction and relaxation, are missing. The rectum and the distal sigmoid colon, which are the areas closest to the anus, are usually affected.

A definitive diagnosis is provided by a rectal suction biopsy of the narrowed area in the colon. During this biopsy, both the mucosa and submucosa are extracted, as opposed to just the mucosal layer because the plexuses are in the muscle layer or submucosal layer.

Treatment is typically surgical resection of the aganglionic part of the intestines. Following this, the healthy end is connected to the anus.

If vomiting is non-bilious, it’s typically caused by an obstruction above the junction of the duodenum with the bile ducts and thus proximal to the ampulla of Vater, such as hypertrophic pyloric stenosis, or annular pancreas.

Hypertrophic pyloric stenosis is a congenital condition, in which there’s hypertrophy of a newborn’s pylorus leading to obstruction of the pyloric valve. Symptoms usually present first around two to six weeks of life with projectile vomiting— so named because the vomit literally launches out of a child’s mouth, and can get more intense over time. On physical exam there’s a small, olive-shaped mass in the epigastrium or right upper quadrant, best felt during, or at the end of feeding, along with visible peristaltic waves of the stomach. Sometimes, a succussion splash may be audible.

Lab work reveals a hypochloremic metabolic alkalosis, due to the loss of hydrochloric acid from the stomach. Low potassium is also commonly found, due to the lowered blood volume from dehydration, causing the kidneys to retain salt and excrete potassium. And this can be fairly dangerous.

Definitive diagnosis is made with an abdominal ultrasound, showing a thickened pylorus and delayed passage of gastric contents in the duodenum.

An upper GI series may also be done, showing the narrow lumen of the pylorus filled with a thin stream of contrast material, known as a "string sign". The streaks of contrast material may also appear double layered due to puckering of the mucosa, which is known as “double-track” or “railroad-track sign".

Management includes rehydration and correction of electrolyte imbalances with IV 5% dextrose in 0.45% sodium chloride with 40 millimole per liter of potassium. Most infants respond within 12 to 48 hours, after which a surgical correction, called a pyloromyotomy can be done. This consists of dividing the pyloric muscle to open up the gastric outlet.

Another cause of non-bilious vomiting is annular pancreas, and this happens when a ring of pancreatic tissue surrounds and compresses the second part of the duodenum. Just like duodenal atresia, it is also associated with Down syndrome, and may present as polyhydramnios in prenatal ultrasound. However, since the obstruction is usually proximal to the ampulla of Vater, vomiting is typically non- bilious.

Definitive diagnosis is made with an abdominal CT scan, which shows the ring of pancreas. Treatment is bypassing the obstructed section of duodenum by duodeno-jejunostomy.

The most common cause of vomiting is gastroenteritis. Most frequently, this is caused by viruses, like rotavirus or norovirus, occurs in epidemics, is sudden in onset and quick to resolve.

Bacterial gastroenteritis from the bacteria Shigella, Salmonella, Escherichia coli, Yersinia or Campylobacter, is typically less common, more prolonged, and more severe. Even less commonly is gastroenteritis caused by parasites, such as Giardia lamblia and Cryptosporidium.

In any case, vomiting is usually accompanied by diarrhea. The infant or child might also have ill contacts, history of eating suspicious foods, poor sanitation or recent travel.

To help with diagnosis - labs include stool cultures, PCR, and microscopy to look for ova and parasites. And these are usually sent on 3 consecutive days to increase the yield.

Treatment focuses on rehydration. If there is severe dehydration or serious electrolyte abnormalities like hypokalemia, or inability to drink, IV fluids may be needed. Otherwise, the child can be given oral rehydration solution which usually contains 50 mEq per L of sodium, 25 g per L of dextrose, and 30 mEq per L of bicarbonate.

Mild to moderate dehydration requires a total of 50 mL per kg, which can be given in frequent, small amounts by oral syringe, spoon, bottle, or cup over three to four hours. An average of 10 mL per kg should be added for every loose stool or episode of vomiting. But if there’s no improvement after 24 hours of rehydration or persistent vomiting and diarrhea, the child should get admitted to the hospital.

Antibiotics should not be started unless a specific pathogen, like Shigella or Campylobacter is isolated. In that situation, oral azithromycin 12 mg/kg is given for the first day with a maximum of 500 mg and then 6 mg/kg/dose with a maximum 250 mg for an additional four days. If the child can’t take oral medications due to vomiting, is immunodeficient, or has signs of bacteremia, then IV ceftriaxone is given as a daily dose of 50 mg/kg per day with a maximum of 1.5 grams, for five days.

Now, another cause of vomiting in this age group is intussusception. This is a telescoping of a proximal portion of the bowel, usually the small intestine, into a distal one, causing bowel obstruction and, later on, a compromise of the blood supply. It can occur in an otherwise healthy baby or child from 3 months to 6 years old, as nausea and bilious vomiting accompanied with an acute colicky abdominal pain, that gets relieved by drawing the knees up to their chest. Later on, if the blood supply to the loop of bowel gets compromised, it causes "red currant jelly" stool, meaning stool mixed with blood and mucus. And if the bowel gets necrotic and perforates, it can progress to sepsis with fever, hypotension and altered mental status. On the abdominal exam, there can be a sausage-shaped mass in the right upper quadrant.

Diagnosis is made with an abdominal ultrasound that shows the classic target or bull’s eye sign, formed by an inner circle, which is the part of the intestine that’s entering the distal segment and an outer circle, which is the distal part receiving the proximal one. An abdominal x-ray can also be used to check for intestinal obstruction or free intraperitoneal gas, in case of bowel perforation.

In most cases, intussusception is treated with a barium or water-soluble contrast enema or an air-contrast enema, which can often push the proximal part of the intestine out of the distal one. If this is unsuccessful or if there’s a perforation, then a surgical reduction of the telescoped bowel or resection may be needed, especially if there’s a necrotic segment.

Next, there’s gastroparesis. This is a functional syndrome of delayed gastric emptying, in the absence of a mechanical obstruction. It is usually idiopathic in origin, but may be associated with a number of diseases like diabetes mellitus, hypothyroidism, viral infections such as rotavirus or norovirus, an autoimmune attack or disorders of the skeletal muscles- such as scleroderma. There are also iatrogenic causes like inadvertent vagal nerve damage during surgery, or can be due to medications like opioids, alpha-2-adrenergic agonists like clonidine, tricyclic antidepressants like amitriptyline, and anticholinergics like atropine.