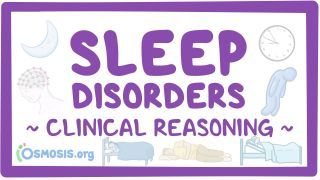 Many of us have trouble falling asleep from time to time - usually because of stress or illness.

But when sleep problems become a regular occurrence and interfere with daily life, that’s a sign of a sleep disorder like insomnia and sleep apnea.

If left untreated, sleep disorders can increase the risk of accidents and debilitating conditions such as depression.

Sleep disorders are usually caused by factors that interrupt the sleep cycle - which is a period of sleep that lasts about 90 minutes, during which we move through five stages.

Over the course of the night, there are four or five sleep cycles.

Across the four stages of NREM, we move from very light sleep during Stage 1, to very deep sleep in Stage 4.

During NREM there’s minimal muscle activity and our eyes don’t move much.

During REM sleep, the eyes dart around, and this is where dreaming occurs, memories are consolidated, and where we get the most rest.

The stages can be interrupted by various things. Heavy smoking, stress, and jet lag can make it hard to fall asleep, and substances like alcohol, caffeine, cocaine, and other stimulants can reduce NREM sleep.

The ability to fall asleep quickly also decreases with age, especially in those with medical conditions that cause dyspnea, pain, nocturia, or nausea.

Individuals end up feeling really tired during the day and are often unable to perform at work, at school, and can struggle to have a healthy sex life.

Often the fatigue can lead to irritability and difficulty focusing, and can worsen feelings of depression and anxiety.

Some individuals get into a vicious cycle where they drink a lot of coffee to stay awake, and that can worsen the underlying problem.

There are nine sleep-wake disorders according to DSM-5.

First, there’s insomnia - the first diagnostic criteria is either having difficulty falling asleep, or waking up throughout the night or in the early-morning and then struggling to fall back asleep.

The second criteria is that the disturbance must be present for more than three times a week for at least three months.

The third criteria is that the sleep pattern must affect the individual’s life - like their performance at work or their relationships, and the symptoms shouldn’t be better explained by other sleep conditions.

Sometimes, insomnia can develop into a vicious cycle - where people worry excessively about having nightmares or about not being able to fall asleep, and that can end up keeping them awake at night.

Second, there’s the primary hypersomnias - starting with narcolepsy which is a sleep disorder that affects the way the brain controls sleep and wakefulness.

The first diagnostic criteria is having repeated bouts of feeling extremely sleepy, of falling asleep, or napping - throughout the day, three or more times a week over the course of at least 3 months.

Secondly, it requires at least one of the following three things: episodes of cataplexy, hypocretin deficiency, and a reduced REM latency.

Cataplexy is generalized muscle weakness triggered by strong emotions like laughter or excitement.

Alternatively, in children or in individuals with narcolepsy for more than six months, cataplexy can be defined as spontaneous grimaces or tongue thrusting without any obvious emotional triggers.

Hypocretin is a neuropeptide produced by the hypothalamus that regulates arousal, wakefulness, and appetite.

Hypocretin is measured using cerebrospinal fluid hypocretin-1 immunoreactivity values, and in narcolepsy they are less than or equal to 110 pg/mL.

REM latency, which is the time it takes us to reach REM sleep after falling asleep, can be measured with polysomnography - which records cardiac and brain activity during sleep.

In narcolepsy, REM latency is less than or equal to 15 minutes, which is far below the normal range of 90 to 120 minutes.

The other primary hypersomnia is hypersomnolence disorder.

For diagnosis, individuals must feel super sleepy during the day, despite sleeping for seven hours a night, and must either have had at least one of the following symptoms: more than one nap during the same day, not feeling well-rested even after sleeping for more than nine hours, or having a hard time being fully awake after being woken up abruptly. This pattern needs to happen for more than three times a week, for at least three months, and negatively impact the individual’s life.

Third, there’s breathing-related sleep disorders which are mostly characterized breathing difficulties. This includes obstructive apneas - where the airways are blocked by things like the tonsils or the back of the tongue.

There are also central apneas -where the issue is related to breathing control by the medulla oblongata - and this can be due to a medication like methadone.

Obstructive sleep apnea-hypopnea can be diagnosed in one of two ways.

The first way is polysomnography that shows at least five obstructive apneas or hypopneas occurring per hour of sleep. These should be accompanied by either snoring, gasping, or breathing pauses; or by daytime sleepiness or tiredness after waking up.

A second way is polysomnography that shows fifteen or more obstructive apneas or hypopneas per hour of sleep, regardless of whether or not the individual has additional symptoms.

In central sleep apnea, the diagnosis requires polysomnography evidence that five or more central apneas occur per hour of sleep.

The main diagnostic criteria is a persistent or recurrent sleep disruption due to an altered circadian rhythm. This can be determined via sleep logs which document when a person is awake and when they are asleep.

Sometimes, an individual may be sleeping or waking up in opposition to what their internal clock dictates, because of their job or lifestyle - like people who do shift-work or like to stay out extremely late.

Another diagnostic criteria is that there should be excessive sleepiness or insomnia, as well as stress or impairment.

They can be distinguished from breathing-related sleep disorders by the fact that there aren’t apneas or abnormal carbon dioxide levels. In addition, the circadian nature differentiates it from insomnia where the difficulties in falling asleep are not caused by an abnormal sleep-wake schedule.

Parasomnias are characterized by abnormal behaviors, experiences, or feelings that occur while sleeping, during specific sleep stages, or as individuals wake up.

During arousal there’s an abrupt change in brain electrical activity as it shifts from deep sleep, or REM sleep, to light sleep, or NREM sleep - and this can be seen on an EEG.

In NREM sleep arousal disorder individuals partially wake up in the first third of the night, during stage 3 - and this can be seen on polysomnography.

When they wake up they either sleepwalk or have sleep terrors - which are abrupt nightmarish episodes that activate the sympathetic nervous system causing mydriasis, tachycardia, rapid breathing, and sweating.

Individuals aren’t able to recall the episode, but because their sleep is interrupted people often feel chronically fatigued and that can cause distress and impairment in a person’s life.

Finally, the symptoms can’t be due to medications or drugs.

A nightmare disorder is when a person has frequent nightmares that involve disasters, feeling unsafe, or running away from people or things who want to harm them.

A second diagnostic requirement is spontaneously awakening from the nightmare and feeling oriented and alert right away.