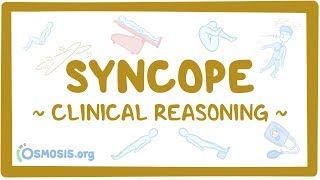 Syncope, or fainting, is when a person loses consciousness and muscle strength. It usually comes on quickly, doesn’t last long, and there’s usually a spontaneous recovery requiring no resuscitation.

It’s caused by a decrease in blood flow to the brain, usually due to low blood pressure.

There’s also presyncope, which is near loss of consciousness with lightheadedness, muscular weakness, blurred vision, and feeling faint without actually fainting.

Presyncope can lead to syncope, so you can think of it as a spectrum of the disease.

Recognizing symptoms of presyncope may allow to act fast and prevent evolution of the episode into a full faint.

The immediate treatment of an individuals with syncope or presyncope starts with laying the individual supine, with legs elevated if possible to help venous return to the heart and restore adequate brain perfusion.

Then, you should assess vital signs, namely a pulse and evidence of respiration, to distinguish cardiac arrest from syncope, and call for additional help if needed.

Finally, you should attempt to arouse the individual without trying to raise them up until they’re ready.

Ok so once the individual has regained consciousness, the next step is to identify the cause.

Neurocardiogenic, vasovagal, and reflex syncope are the most common causes of syncope, and this is a benign condition triggered by parasympathetic activation resulting in vagus nerve discharge.

This discharge may in turn be triggered by urination, defecation, coughing, prolonged standing, or a stressful event like seeing blood and needles.

Carotid sinus hypersensitivity is a variant of neurocardiogenic syncope.

That’s when mild external pressure on the carotid bodies in the neck is enough to induce this reflex response.

It can be triggered by a tight collar, shaving, or head turning. Most patients with neurocardiogenic syncope experience a prodrome, which is a period of symptoms lasting at least a few seconds just prior to losing consciousness.

The prodrome is usually associated with some precipitating event, and it may include dizziness or lightheadedness, a sense of being warm or cold, pallor, nausea, abdominal pain, sweating, palpitations, visual blurring, having poor hearing, and hearing strange sounds.

In neurocardiogenic syncope there’s usually a normal physical examination and a normal ECG, and the good news is that these patients usually recover quite nicely.

Another common cause is orthostatic hypotension, which is defined by either a drop in blood pressure of more than 20 mmHg or a reflex tachycardia of more than 20 beats per minute, when a person goes abruptly flom lying down or sitting to standing up.

It occurs when there’s a delay in constriction of the lower body veins, which is needed to maintain an adequate blood pressure when changing position to standing.

As a result, blood pools in the veins of the legs for longer and less is returned to the heart, leading to a reduced cardiac output.

And there’s also typically a set of prodromal symptoms that a patient feels before fainting.

The main cause of orthostatic hypotension is low blood volume due to dehydration, which doesn't really affect constriction, but if you have low blood volume plus blood pooling in the veins, then there’s less blood available in the systemic circulation.

Elders, pregnant women, and patients taking certain medications are predisposed to develop symptomatic orthostasis, including medications that block vasoconstriction - such as calcium channel blockers, beta blockers, alpha blockers, and nitrates, diuretics, which affect volume status and electrolyte concentrations, and medications that prolong the QT interval like antipsychotics and antiemetics.

Other causes of syncope include psychiatric conditions like anxiety and panic disorders; these patients are generally young, without cardiac disease, and typically have multiple episodes.

Metabolic causes of syncope include hypoglycemia and hypoxia.

And finally drugs of abuse and alcohol may cause a transient loss of consciousness, as well as signs of toxicity.

Typically, when that’s the cause, patients don’t return to normal neurologic function immediately after regaining consciousness.

And to make matters worse, alcohol can also contribute to orthostatic hypotension by impairing vasoconstriction.

An important life-threatening cause of syncope is cardiac syncope, which includes arrhythmia, ischemia, valvular abnormalities like aortic stenosis, cardiac tamponade, and pacemaker malfunction.

Risk factors for cardiac syncope include a strong family history - so having a close relative with sudden cardiac death or myocardial infarction before 50 years old, history of heart disease, and symptoms consistent with heart disease like chest pain, palpitations, or shortness of breath.

Arrhythmia is the most common serious cause of cardiac syncope, but it can be intermittent and require cardiac monitoring.

Another life-threatening causes of syncope is a pulmonary embolism, which happens when an embolus suddenly gets lodged inside a pulmonary artery or arteries, causing hypoxia.

Also, a severe hemorrhage, can cause hypovolemia and result in syncope.

Patients with syncope and a very strong headache could have a possible subarachnoid hemorrhage.