A 20-year-old female presents to the clinic with the complaints of irregular menstrual bleeding and breast tenderness. History reveals two months ago she was placed on medroxyprogesterone acetate injections for contraception. A urine pregnancy test at that time was negative. She is sexually active with one partner and does not use condoms during intercourse. The patient's symptoms are most likely due to which of the following? 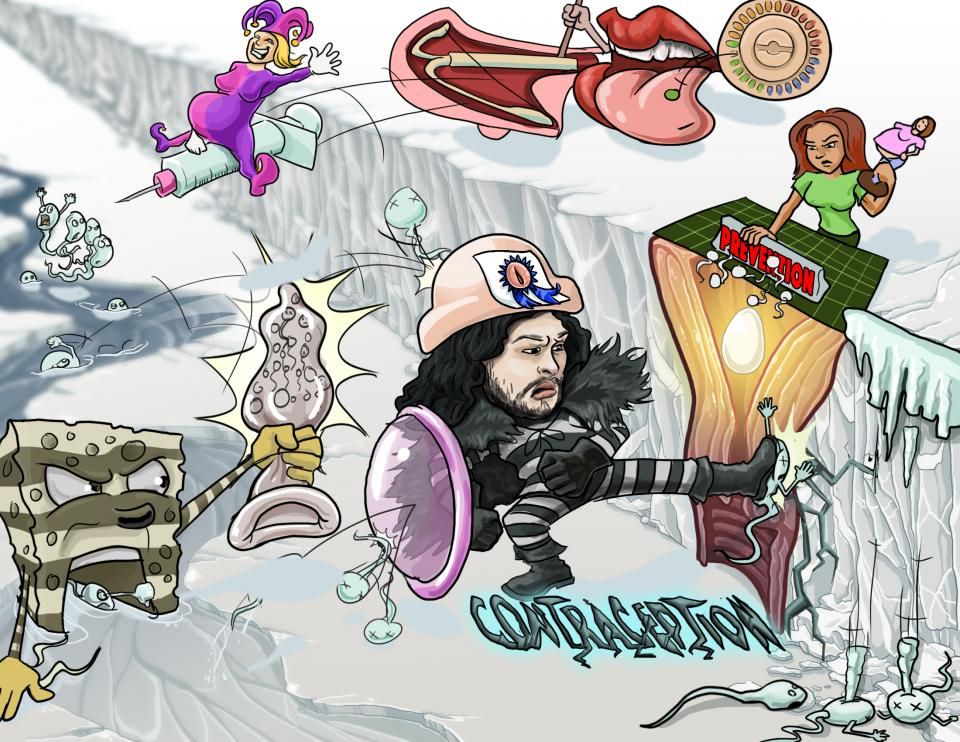 Contraception refers to various methods that can be used to prevent pregnancy, and they can be categorized by their efficacy.

Think of efficacy as the number of pregnancies that occur in 100 females using that method over the course of a year. Ideally that number to be as low as possible.

Tier 1 methods are the most effective, with less than 1 pregnancy in 100 females in a year. These include types of long active reversible contraception, or LARC, which includes intrauterine devices and contraceptive implants, and irreversible methods, like a vasectomy and bilateral tubal ligation. Of course, these can sometimes be reversed, but the reversal success rates vary.

Tier 2 methods are a little less effective, with 4 to 7 pregnancies in 100 females in a year. These include hormonal contraception, like contraceptive pills, patches, vaginal rings, and hormonal injections.

Finally, tier 3 methods are the least effective, with over 13 pregnancies in 100 females in a year. These include the male and female condoms, diaphragms and cervical caps, spermicides and sponges, and “natural” contraceptive methods like withdrawal of periodic abstinence during the fertile period.

Now, keep in mind that condoms are the only contraceptive method that also protect against sexually transmitted infections - so they should always be used when that’s a concern.

Both hormonal and copper IUDs are good choices in adolescent and adult females who want a long term, highly effective contraceptive method, and in females who want to avoid estrogen exposure because they may have other risk factors for deep vein thrombosis and pulmonary embolism, like smoking and being over age 35.

Contraindications for both hormonal and copper IUDs include known or suspected pregnancy, unexplained uterine bleeding, a pelvic infection, abnormalities of the uterine cavity - like congenital defects, or large fibroids that distort the uterus.

Additional contraindications for copper IUDs include Wilson’s disease, which is where the body stores too much copper, and having a copper allergy.

The next step is choosing between a hormonal or copper IUD.

Hormonal IUDs protect against pregnancy for about 5 years, and typically contain levonorgestrel in 3 different concentrations: 13.5 milligrams, 19.5 milligrams, and 52 milligrams.

Levonorgestrel prevents pregnancy by inhibiting pituitary LH secretion and therefore inhibiting ovulation. Additional contraceptive mechanisms include thickening the cervical mucus, so sperm can’t get through, and thinning the endometrial lining, so implantation can’t occur. Therefore, they can cause amenorrhea - and the higher the concentration of levonorgestrel, the more likely that is to happen.

If they don’t cause amenorrhea, then at the very least they can lessen the pain and blood loss during menstruation. So they may be useful for females who have significant dysmenorrhea or blood loss during their periods, like those with endometriosis.

Copper IUDs, on the other hand, are effective for about 10 years, during which time they slowly release copper ions - which are toxic to sperm.

Copper devices also have no effect on ovulation or menstrual cycles - so they don’t cause anovulation or amenorrhea.

Both types of IUDs need to be inserted by a clinician. And after the IUD is in place, its strings protrude a little bit into the vagina. They can’t be felt, but they can be used to check if the IUD is still in place.

Hormonal IUDs should be inserted between days 1 and 5 of the menstrual cycle, in which case the contraceptive effect is also immediate.

If inserted later than day 5 of the menstrual cycle, back-up contraception, like condoms, should be used for about 7 days, until the contraceptive effect of the IUD kicks in.

Copper IUDs can be inserted on any day of the menstrual cycle, and the contraceptive effect is immediate.

Typically after placement of both a copper and hormonal IUD there’s unscheduled bleeding or spotting in the weeks or months following insertion - but this generally improves with time.

Now, even though these devices can be used for several years, they can also be removed sooner by a clinician if pregnancy is desired.

Typically, it’s recommended that females use barrier contraception, like condoms, for at least one menstrual cycle after IUD removal, to allow the endometrium to regenerate normally; and then, they may attempt to conceive.

The other type of LARC is the contraceptive implant.

The implant is a tiny rod made of ethylene vinyl acetate, that contains 68 milligrams of etonogestrel - which may sound a lot like estrogen, but it’s actually also a progestin!

This tiny rod is implanted on the inner side of the upper arm, and it slowly releases etonogestrel into the circulation, providing contraception for about 3 years.

Since etonogestrel is also a progestin, contraindications are similar to hormonal IUDs’ - known or suspected pregnancy, active liver disease, and current or past breast cancer.

The implant should be inserted by a clinician under local anesthesia. Similar to the IUD, it should be done between days 1 and 5 of the menstrual cycle for immediate contraceptive effect. And if it’s done later, then back-up contraception should be used for one week.

The most common side effect of the implant is unpredictable menstrual bleeding pattern - either longer or shorter periods than before, no bleeding at all, or simply irregular periods.

Other side effects are progestin related - like headaches, bloating, weight gain, acne and breast tenderness.

After removing the rod, most individuals ovulate within a month, allowing a pregnancy to occur.

If continued contraception is desired, a new implant can be inserted, either in the same arm or in the other arm.

In males, a vasectomy can be performed. That’s where, under local anesthesia, each vas deferens is interrupted or occluded.

Some contraindications to a vasectomy are the presence of scrotal hematoma or genitourinary infections, but the procedure can be performed after these issues are resolved.

Generally speaking, sterility is not instantaneous following a vasectomy.

In fact, individuals are advised to use backup contraception for 3 months following the procedure, and then a semen analysis is done.

During the three months, the individual should have ejaculated at least 20 times for a valid result.

If the analysis shows azoospermia, meaning no sperm in the semen, then that confirms sterility.

Typically, clips, rubber bands, sutures, or cauterization can be used to clamp down the fallopian tubes, or the tubes can be removed altogether.

Most often, tubal ligation is done in a postpartum setting - either during a caesarean delivery, or 1 or 2 days after vaginal delivery.

Alternatively, it can be performed at a time unrelated to childbirth, in which case it’s called an interval procedure.

The risk of pregnancy is extremely low following bilateral tubal ligation - however, in case it does happen, it comes with a high risk of ectopic pregnancy.

Ok, now let’s move on to the second tier of contraceptives, all of which contain hormones.

There’s two categories here - first, there are contraceptives which contain both estrogen and progestin, like combined oral contraceptives, patches, and vaginal rings.

Second, there are contraceptives that contain only a progestin - like injections and the mini pill.

Contraceptives which contain a set concentration of both estrogen and progestin are frequently used, especially in individuals with an underlying medical condition.

The higher the dose of the estrogen component, the more they inhibit FSH, so ovarian follicles don’t develop.

Finally, other progestin-related contraceptive mechanisms are thinning of the endometrial lining so implantation can’t occur, and thickening the cervical mucus, making it harder for sperm to pass through.

There are also non-contraceptive benefits in some individuals with underlying conditions.

These include menstrual cycle disorders, like heavy menstrual bleeding or pelvic pain because of endometriosis, painful ovarian cysts, or issues related to polycystic ovarian syndrome, like oligomenorrhea and hyperandrogenism.

Additionally, they may be used as hormone replacement therapy in individuals with primary hypogonadism, like in Turner’s syndrome.

Now there are also estrogen and progestin-related contraindications.

Estrogen-related contraindications include the risk of deep vein thrombosis and adverse cardiovascular events. This risk is highest in individuals over age 35, smokers, especially those that smoke over 15 cigarettes a day, and those with excess estrogen.

Sources of excess estrogen can be endogenous, like with anovulatory disorders such as PCOS, or exogenous, like estrogen-only medications - but these are not used because of their risk of endometrial hyperplasia and cancer.

Progestin-related contraindications are similar to those of progestin IUDs or implants - current breast cancer or active liver disease.

Finally, bear in mind that hormonal contraceptives interact with other medications that may decrease their contraceptive efficiency. Examples include antibiotics like cephalosporins, penicillins and macrolides to name a few, anti-seizure medications like barbiturates, carbamazepine, phenytoin, primidone and topiramate, as well as HIV protease inhibitors like amprenavir and ritonavir, and many others commonly used drugs like dapsone and griseofulvin.

Ok, now, most combined oral contraceptives use ethinyl estradiol as the estrogen component, but the progestin component varies quite a bit.

Most progestins, like norethindrone and levonorgestrel are synthetically derived from testosterone - so they have more or less androgenic activity, depending on the chemical tweak in the molecule. Because of that, they can alter lipid profiles, lowering HDL levels.

And there are also some progestins considered to have antiandrogenic properties, like drospirenone and dienogest.

Classically, it was thought that anti-androgenic progestins should be recommended in individuals with hyperandrogenism, like those with PCOS. However, their anti-androgen activity is weak, so currently, we can choose any formulation of combined oral contraceptive.

Drospirenone, however, has a benefit in treating premenstrual dysphoric disorder, or PMDD.

No matter the progestin, a lipid profile should be regularly checked in all individuals currently using combined oral contraceptives.

Multiphasic pills have the disadvantage that they require a very strict adherence to the order in which they should be taken, so monophasic pills are usually chosen.

Now, before starting any type of combined oral contraceptives, the possibility of pregnancy should be assessed.

So first, a urine pregnancy test is done. If that’s negative, it matters when was the first day of her last menstrual period - so the latest first day of menstrual bleeding.

If that was less than 7 days ago, combined oral contraceptives can be started immediately, and back-up contraception, like condoms or abstinence, should be used for 7 days.

If the first day of her last menstrual period was more than 7 days ago, it matters if and when there has been an episode of unprotected sex.

If there hasn’t been any, the pills can be started immediately, and back-up contraception should be used for 7 days.

If the last episode of unprotected sex was less than 5 days ago, hormonal emergency contraception should be considered, and the pills can be started the same day.

If the last episode of unprotected sex was more than 5 days ago, or if the female can’t remember when it happened, emergency contraception is not effective, but the pills can still be started the same day.

The pregnancy test should be retaken in two weeks to confirm that the female is not pregnant.

On the off-chance that pregnancy did occur, it’s important to know that hormonal contraceptives don’t harm the fetus, and further options depend on the individual.

Ok, now, for actually starting the pill, there are three options. First is to start taking the pills the day they’re prescribed - this is called the “quick start”.

Second is to start taking the pills the first Sunday after their period begins - this is called the “Sunday start”.