An 8-month-old infant is brought to the family doctor by her mother who has noticed a red rash developing on her daughter’s face. According to the mother, this rash appeared a few weeks ago and is worsening. She thinks it may have appeared after her daughter opened her aunt’s makeup box and smeared mascara over her face. She has also noticed her daughter scratching at the red areas intermittently. Vital signs are all within normal range. Examination shows multiple small papules, pustules, and vesicles around the daughter’s mouth, and scattered lesions near the nostrils.


Which of following is the most appropriate initial treatment? 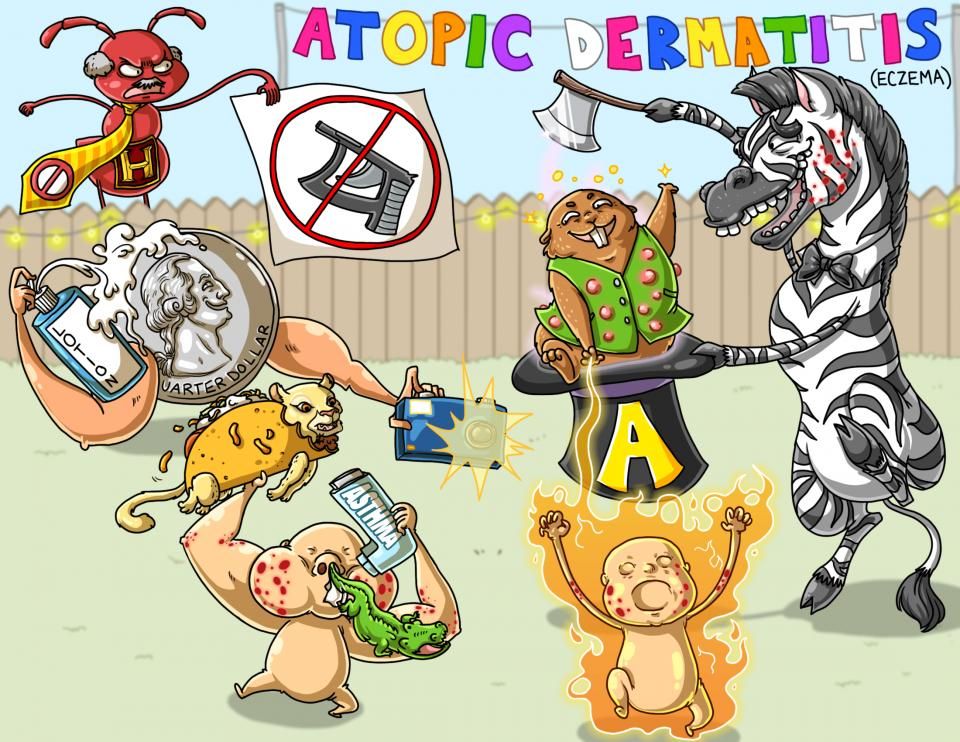 An eczematous rash, or simply eczema, is a group of inflammatory skin conditions characterized by redness, itching, and sometimes oozing vesicular lesions, which may become scaly, crusted, or hardened.

Now, every type of eczema has a different set of additional symptoms, and also the area of the skin on which the symptoms appear tends to be different.

That’s why diagnosis is based mostly on the history and physical examination, and a patch test may be done to determine whether there is an allergic component. Finally, in uncertain cases, a skin biopsy may be useful.

Atopic dermatitis results from an allergy, more specifically, it happens when the immune system attacks the skin causing a dry, itchy rash on flexor surfaces of the body, areas like the creases of the wrists, the insides of the elbows, and the backs of the knees, as well as exposed skin surfaces like on the face, the hands, and the feet.

Although it usually causes patches of red itchy skin that come and go, the skin can occasionally even blister and peel. Over time, the skin can become lichenified, which literally means turned to leather.

Atopic dermatitis is generally a clinical diagnosis, based on evidence of itchy skin, plus three or more criteria, which include having a history of dermatitis involving the skin creases, visible dermatitis involving flexural surfaces, personal or family history of asthma or hay fever, presence of generally dry skin within the past year, and either symptoms beginning in a child before the age of 2 years or dermatitis affecting the cheeks or dorsal aspect of extremities in children before the age of 4 years.

The goals of treatment are to reduce symptoms of inflammation and itching, as well as prevent exacerbations.

It’s important to identify and avoid any triggers, as well as avoiding overheating, dressing in soft fabrics, and managing stress well.

Dry skin can be managed with frequent moisturization, which is usually best to apply after a lukewarm bath, and oral H1 antihistamines can be given to alleviate itching.

If the atopic dermatitis is still not controlled, individuals may require phototherapy or systemic immunosuppressive treatment. But these treatments are not suitable for infants and young children.

Next, there’s contact dermatitis, which is a localized reaction that arises from direct skin exposure to a trigger substance.

Contact dermatitis may either be allergic or, in most cases, induced by an irritant.

In allergic contact dermatitis, an allergen induces a hypersensitivity immune response at the site of exposure.

The most common causing allergen is the plant oleoresin urushiol found in poison ivy, poison oak, and poison sumac, as well as metals like nickel in jewelry, preservatives found in cosmetics and personal care products, latex, topical antibiotics, and paraphenylenediamine - which is commonly used in hair dyes.

On the other hand, in irritant contact dermatitis, the trigger substance itself directly damages the skin, causing physical, mechanical, or chemical irritation.

The hands are the usual site for irritant contact dermatitis, since the most common causes include soaps and cleansers, acids and alkalis, solvents, bleach, plants, paper, and dust or soil.

Rubber gloves may also induce an irritant contact dermatitis, which is distinct from latex allergy.

Now, the key to treatment of both allergic and irritant contact dermatitis is proper evaluation and detection of the triggers to avoid it, as well as treatment of skin inflammation with topical corticosteroids.

Moving on, seborrheic dermatitis is a chronic, relapsing, and usually mild form of dermatitis that involves skin areas with a high density of sebaceous glands, such as the face and scalp. Less commonly involved are the chest, upper back, and axillae.

The cause of seborrheic dermatitis is not known but believed to involve a number of genetic and environmental factors.

The severity may vary from minimal scaliness of the scalp without inflammation, commonly known as dandruff, to more widespread involvement, and it tends to worsen with stress and during the cold and dry winter months.

Treatment varies according to the severity. Individuals with mild disease that presents only dandruff are generally treated with antifungal agents like shampoos or creams until remission is achieved.

On the other hand, individuals with moderate to severe seborrheic dermatitis who have scale, inflammation, and pruritus, may get treatment with an antifungal agent in combination with a topical corticosteroid.

Dyshidrosis, also known as acute palmoplantar eczema, presents as intensely pruritic, chronic and recurrent intraepidermal vesicles on the palms, soles, and sides of the fingers.

The vesicles may coalesce to form large bullae and may become superinfected. Vesicles and bullae persist for several weeks, desiccate, and ultimately resolve with desquamation.