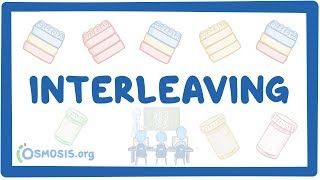 Interleaving is a study strategy where you mix up the order of the topics that you’re studying, instead of reviewing them in blocks.

For example, let’s say you have an exam coming up and you want to make a study schedule to help you make the best use of your time.

One approach is called blocking or massed practice, that’s where you set aside big blocks of time dedicated to each topic you’re studying.

Like spending time studying for topic A, then topic B, before moving on to topic C.

In other words, you practice a topic until you achieve proficiency or comfort and then you move onto the next one.

But research shows that the best way to learn material is to actually mix, or interleave, your studying.

So, if you want to learn concepts A, B, and C, then you should mix up what you’re studying, so that it looks like this:

So if you’re reviewing the various classes of medications that treat hypertension.

Instead of reviewing all of the ACE-inhibitors, followed by the diuretics, followed by calcium channel blockers, you should mix things up.