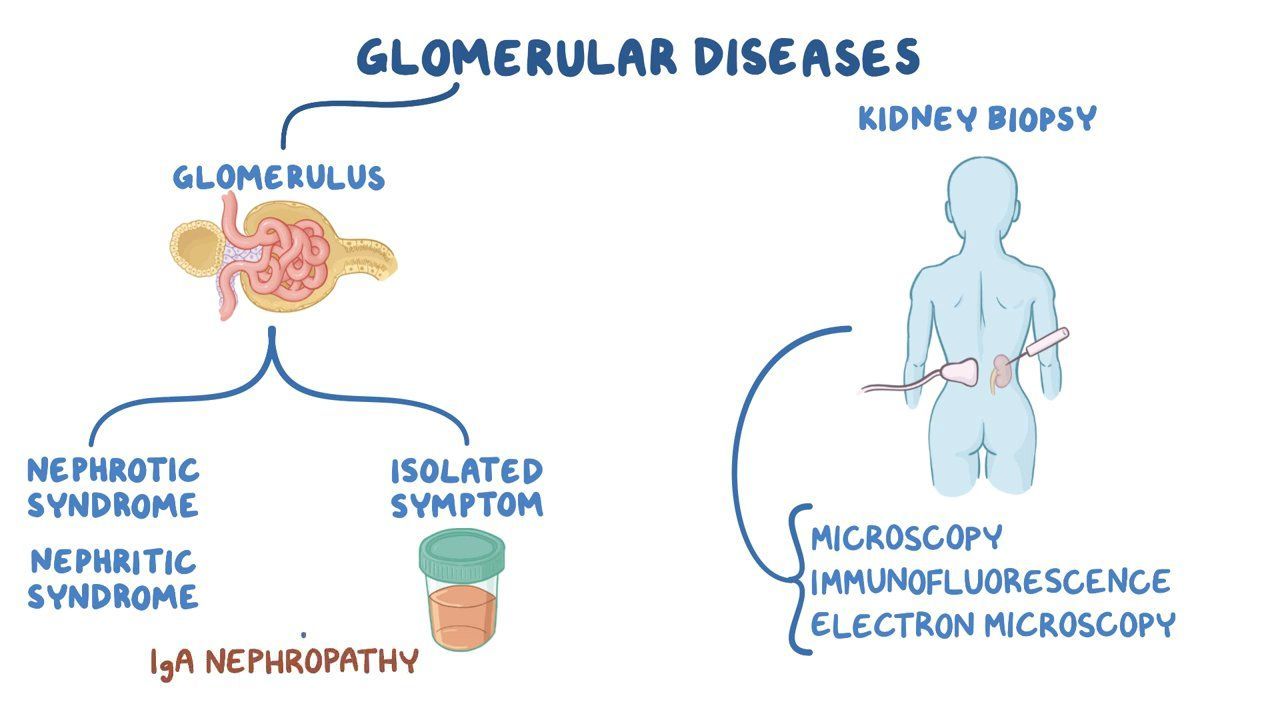 A 5-year-old girl comes to the pediatrician’s office because of edema in her lower legs, ankles, and feet. The edema is less apparent in the morning and worsens throughout the day. The patient’s mother states that the patient had suffered from an upper respiratory infection the previous week. Her temperature is 36.8°C (98.3°F), pulse is 102/min, respirations are 26/min, and blood pressure is 84/60 mm Hg. Examination shows pale lower extremities that exhibit 2+ pitting edema. Urinalysis was positive for fatty casts and negative for hematuria. Urine protein was 4.9 g/24 h. Which of the following is the most appropriate next step in management?

Glomerular diseases damage the glomeruli which disrupts the filtration process, and allows blood or proteins to get into the urine. Usually a kidney biopsy is needed to determine the cause.

Specifically, microscopy and immunofluorescence along with electron microscopy can be done on the kidney biopsy to classify the disease.

Some glomerular diseases cause a clinical syndrome like nephrotic syndrome or nephritic syndrome.

But other times, a glomerular disease, may only cause an isolated symptom like hematuria.

For example, IgA nephropathy can cause isolated hematuria, or it can cause nephritic syndrome.

Additionally, urinalysis is done both by microscopy and dipstick, and a 24-hour protein collection is done as well.

Microscopy gives information about what the cells in the urine look like.

Now, the dipstick test is more of a qualitative and semiquantitative test- try saying that three times fast. It can give information about what’s in the urine- such as blood or proteins, but can’t exactly say how much of it there is.

That’s why a 24-hour protein collection is done in order to determine how much protein is lost through urine.

Glomerular disease can manifest in a number of ways. First, there’s isolated hematuria which can be macroscopic if it’s seen by the naked eye, or microscopic - if it’s only seen on urinalysis.

Hematuria can be seen on dipstick testing and on microscopy- where it is defined as having more than 5 red blood cells per microliter.

Hematuria can also be due to a kidney stone damaging the ureter or a bladder condition, in which case the red blood cells aren’t dysmorphic and there aren’t any red blood cell casts.

Typically hematuria is persistent, so the urinalysis is repeated after one to four weeks to confirm that it hasn’t resolved.

Sometimes, hematuria can be transient and this is caused by excessive exercise or abdominal trauma and even cancer, especially in individuals over 50 years old.

Next, there’s isolated proteinuria which is usually transient, with about 1 or 2 grams of protein lost per day.

Usually the urine dipstick test is repeated within a few days. If the isolated proteinuria persists in an individual below age 30, and it appears when the individual has an upright posture, then the most common cause is orthostatic proteinuria and it doesn’t require medical treatment.

Next up is nephritic syndrome, which is where there’s peripheral or periorbital edema, hypertension, and oliguria- meaning a urine output between 80 and 400 milliliters per day.

On the 24-hour protein test, there’s moderate proteinuria- specifically between 1 and 3 grams per day.

One subset of nephritic syndrome is rapidly progressive glomerulonephritis or RPGN - and that’s where there’s a rapid decrease in the eGFR that occurs over a few days to 3 months.

On urinalysis, there’s usually glomerular hematuria and a 24-hour protein collection shows moderate proteinuria, between 1 and 2 grams per day.

Finally, there’s nephrotic syndrome, where the individual has peripheral or periorbital edema, and occasionally ascites and pleural effusions. In some cases, there’s hypertension.

The 24-hour protein collection shows proteinuria above 3.5 grams per day.

If urine protein-to-creatinine ratio is measured, then the ratio will be greater than 3.

Additionally, on urinalysis, specifically microscopy, there is lipiduria, which is identified based on the presence of fat droplets.

Now, let’s start talking about the causes of nephritic syndrome. First, there’s poststreptococcal glomerulonephritis, where there’s often a history of a group A streptococcal skin infection 3 to 6 weeks prior or a throat infection 1 to 3 weeks prior to the kidney findings.

Additionally, serum C3 and C4 levels are checked because they can be low in poststreptococcal glomerulonephritis. That happens because the immune complexes that are formed reach the glomerulus and cause inflammation and deposition of C3 and C4 in the subepithelial space, which consumes the complement.

With poststreptococcal glomerulonephritis, a kidney biopsy is not usually necessary, especially if there’s a history of a throat or skin infection and if the streptozyme test is positive.

A throat or skin culture can be done and sometimes they are positive for a streptococcal infection.

Next there’s IgA nephropathy, which often causes gross hematuria and flank pain, in a person who has an acute upper respiratory tract infection.

A kidney biopsy is usually done when a person has proteinuria greater than 500 milligrams per day or with an elevated serum creatinine.

Results of the kidney biopsy show mesangial proliferation on light microscopy, and on immunofluorescence and electron microscopy, IgA deposits can be seen in the mesangium.

Now, if apart from isolated hematuria or nephritic syndrome, the individual also has systemic symptoms, like symmetrical rashes usually located in the lower extremities, palpable purpura, migratory arthritis in the lower large joints and gastrointestinal symptoms, like nausea, vomiting and abdominal pain, then this can point towards IgA vasculitis - formerly called Henoch-Schönlein purpura.

Additional lab work for IgA vasculitis consists of CBC, PT and PTT, which will all be normal, but this rules out thrombocytopenia and coagulopathies.

Next up, a skin biopsy is done and this shows leukocytoclastic vasculitis in postcapillary venules with IgA deposition on light microscopy, which is diagnostic for IgA vasculitis.

A kidney biopsy has the same indications as IgA nephropathy and the findings are similar.

The kidney biopsy shows mesangial proliferation on light microscopy, and on immunofluorescence and electron microscopy, IgA deposits can be seen in the mesangium.

Another cause of nephritic syndrome is Alport syndrome, which can present with isolated persistent hematuria.

Alport syndrome is a genetic condition that often occurs in children, and it can lead to renal failure as well as hearing loss.

In Alport syndrome, an ophthalmologic exam might also reveal anterior lenticonus- which is when the anterior part of the crystalline lens has a conical shape.

If the C3 or C4 levels are low, and there’s a positive or negative ANA- then a kidney biopsy is done to confirm the diagnosis.

If C3 and C4 levels are normal and ANA antibodies are negative and there’s suspicion for Alport syndrome, then genetic testing is done to confirm the diagnosis.

A kidney biopsy can also be done and on electron microscopy, there’s often thinning in the glomerular basement membrane, but this isn’t specific for Alport syndrome. In this case, immunostaining is done to reveal the specific abnormal proteins.

Now, treatment of nephritic syndrome consists of some general measures meant to lower proteinuria and maintain the blood pressure in the normal range.

With poststreptococcal glomerulonephritis, oral nifedipine is given instead of an ACE inhibitor, because in this case, the ACE inhibitor can precipitate hyperkalemia. Additionally, if there’s fluid overload, a loop diuretic like furosemide is given.

With post-streptococcal glomerulonephritis, if there’s evidence of an active infection, then oral penicillin is given for 10 days. After antibiotic therapy, urinary abnormalities disappear with time and recurrences are rare.

For IgA nephropathy, specific interventions consist of anti-inflammatory therapy using glucocorticoids. This is recommended in individuals with a declining eGFR or proteinuria above 1 gram per day despite using ACE inhibitors or ARBs for at least 3 months or individuals with active disease- like proliferative changes in the glomerulus - seen on biopsy.

IV methylprednisolone can be given for 3 consecutive days at the beginning of months 1, 3, and 5 or oral prednisone can be given at a dose of 1 milligram per kilogram per day for two months, followed by monthly dose reductions over the next four months.

Now, in individuals that present with rapidly progressive glomerulonephritis, immunosuppressive therapy is done.

Initial therapy consists of pulses of IV methylprednisolone for 3 consecutive days at the beginning of each month, followed by oral prednisone plus oral cyclophosphamide until remission is obtained.

With IgA vasculitis, treatment relies on adequate oral hydration and bed rest. If there’s joint pain or abdominal pain, then naproxen can be given. If there’s severe abdominal pain that doesn’t go away with naproxen, then systemic glucocorticoids like oral prednisone are used.

Now, for the renal disease, if there’s microscopic or gross hematuria, proteinuria that’s less than 0.5 grams per day and a normal serum creatinine, then no specific treatment is needed.

If proteinuria exceeds 0.5 grams per day, then ACE inhibitors or ARBs are used.

If there’s still proteinuria over 0.75 grams per day, nephrotic syndrome, or if the renal biopsy shows rapidly progressive glomerulonephritis, then more aggressive treatment is needed.

If after 4 to 6 months, there’s still proteinuria over 0.75 grams per day, then another renal biopsy is done.

If the renal biopsy shows active inflammation, then oral mycophenolate mofetil is used.

If the lesions are chronic and there’s no active inflammation, then ACE inhibitors or ARBs are used.

If the renal biopsy shows crescents in many glomeruli, then glucocorticoids are used with either mycophenolate mofetil or cyclophosphamide.

If the individuals progress to end-stage-renal-disease or ESRD, then hemodialysis or a renal transplant can be done, but with the transplant, the risk of recurrence is high.

For Alport syndrome, if a person had hypertension or proteinuria, ACE inhibitors or ARBs are given.

If individuals have end-stage-renal disease, meaning they have an eGFR below 15 milliliters per minute per 1.73 square meters, then a renal transplant is recommended.

Usually after a renal transplant, there’s no disease recurrence.

With Goodpasture’s disease, individuals present with systemic symptoms- like malaise, unintentional weight loss, arthralgias fever and with pulmonary symptoms- like shortness of breath, cough and hemoptysis.

With microscopic polyangiitis and granulomatosis with polyangiitis, symptoms include fatigue, unintentional weight loss, arthralgias, purpura in the lower extremities and fever. Additionally, there can be sinusitis, otitis media, hearing loss, along with pulmonary manifestations- like shortness of breath, cough and hemoptysis.

Neither c-ANCA, nor p-ANCA are specific for one type of vasculitis.

A kidney biopsy is done to find the underlying cause. This shows severe glomerular injury and the development of a crescent shape.