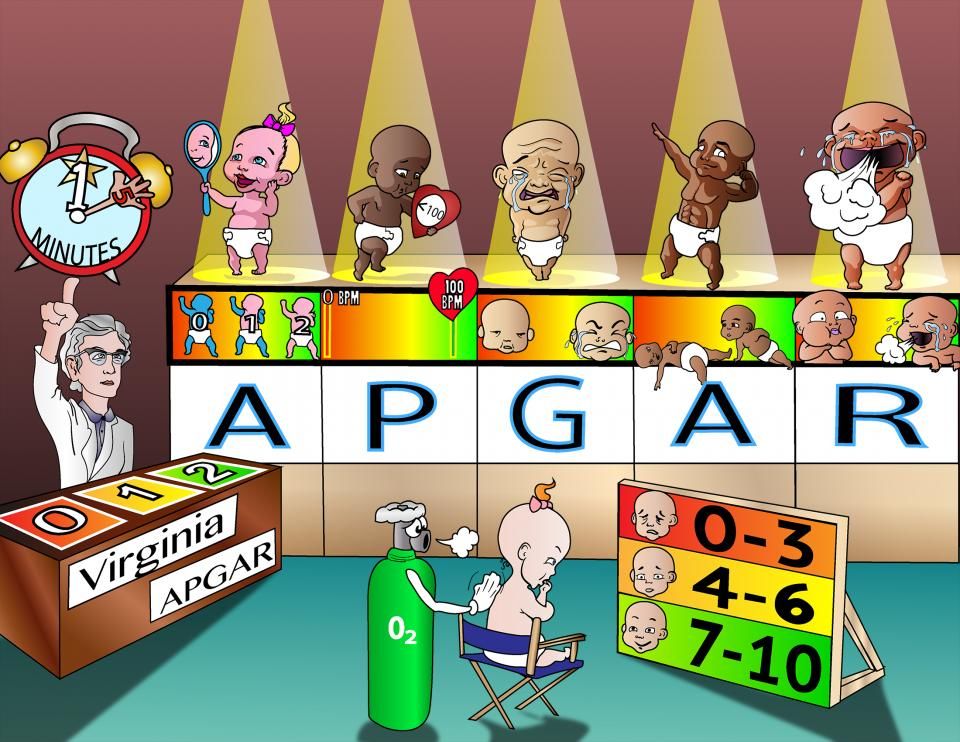 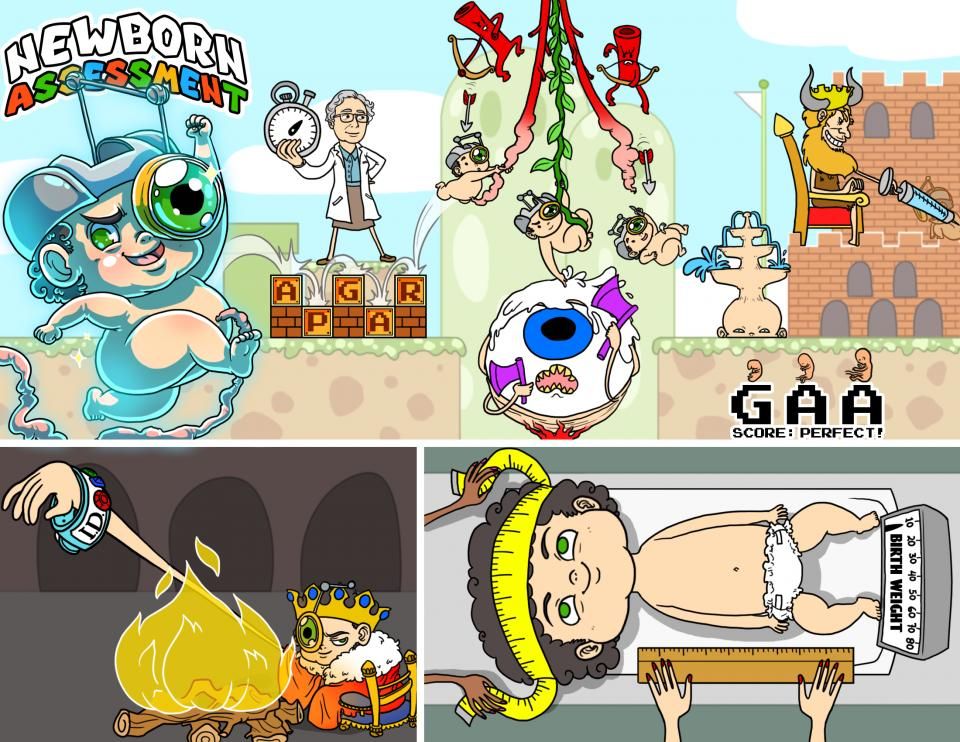 Newborn management, especially in the first 'golden minute’ after birth, is vital to ensure a successful transition from intrauterine to extrauterine life.

It consists of a series of steps, like the Apgar score, performed at specific times to detect any problems the newborn might have, and to deliver effective resuscitation. We can divide the delivery room timeline into 5 parts.

Ok, part one includes what happens before delivery. This includes making sure the right equipment for resuscitation is nearby; knowing how the baby will be delivered and its gestational age; and if the mother had regular prenatal care.

The next step is assessing any risk factors that might anticipate resuscitation, to allow a team skilled in neonatal resuscitation to be present during delivery.

Maternal risk factors include age under 20 or over 35 years; diabetes mellitus or hypertension; substance use disorder; and previous history of stillbirth, fetal loss or early neonatal death.

Part two consist of the first 30 seconds of life. Once the baby is delivered, the time of birth is noted. Next, a few initial steps are performed to ensure a smooth transition and perhaps to stimulate the newborn to start breathing if it didn’t come out doing so.

First, the newborn is dried with towels.

Second, the newborn should be kept warm by setting the temperature in the delivery room at 26°C and by using blankets or a radiant warmer bed. Pre-term babies with less than 28 weeks of gestation should be wrapped in plastic without being dried first. This step is important because hypothermia contributes to hypoglycemia, acidosis and even mortality.

Third, the nose and mouth are cleared of secretions with a bulb syringe or a suction catheter. This is not done routinely; it’s only done if the baby doesn’t start breathing immediately after birth.

Now, the initial steps usually provide adequate stimulation in most newborns. But if breathing doesn’t begin spontaneously at birth, briefly slapping or flicking the soles of the feet, and rubbing the infant's back might provide the nudge to get that first deep breath.

Next, part three takes place within one minute after birth and includes a quick delivery room assessment of the neonate's clinical state, and if required, resuscitation.

The quick delivery room assessment consists of three questions: Is the infant's gestation age greater than 35 weeks? Does the infant have good muscle tone? And is the baby breathing or crying? If the answer is yes to all three questions, there’s no need for resuscitation and the baby can proceed to the next step.

If the answer is no to any of those questions, further evaluation and intervention are needed. This begins with assessments of the infant’s respiratory effort, color, and heart rate.

The heart rate is determined by auscultation of the precordium and by pulse oximetry.

Additionally, ECG monitoring can be used selectively for high-risk births where there is a high likelihood of resuscitation.

So if upon further evaluation the infant is apneic or gasping and has a heart rate under 100 beats per minute, positive pressure ventilation by mask is started, usually at a rate of 40 to 60 breaths per minute.

When beginning ventilation, the baby must be positioned on a radiant warmer bed with the neck in a neutral to slightly extended position. The pressure should be set at 30 to 40 centimeters of water in term babies or 20 to 25 centimeters of water in preterm infants. Moreover, term infants respond to resuscitation better when room air is used as the initial ventilating gas, which has around 21 percent oxygen. But, if the heart rate is less than 60 beats per minute and chest compressions are indicated, 100% oxygen is recommended.

Regarding target blood oxygen saturation after birth, it should rise with 10% per minute from a baseline of 60 to 65% one minute after birth to 85% to 95% over the first 10 to 15 minutes of life.

If after 15 seconds the heart rate is not increasing and stays below 100, ventilation needs to be corrected: the correct head position needs to be checked; the mouth and nose need to be suctioned for any possible residual meconium; the mouth opened and the jaw tilted forward; and the pressure might need to be increased using increments of 5 to 10 centimeters of water to a maximum of 40. If this doesn't help, endotracheal intubation or laryngeal mask can be considered.

Ok, so if the heart rate is under 60 beats per minute after talking ventilation corrective steps, intubate the infant or place a laryngeal mask airway if this has not already been done. Next, initiate chest compression and reassess that adequate positive pressure ventilation is being delivered.

Chest compressions are performed by applying pressure with two fingers over the lower third of the sternum. The sternum should be compressed by about 2-3 cm in a term baby at a rate of about 2 compressions per second, and the lungs should be reinflated with oxygen after every 3 compressions.

If the heart rate increases, follow the guideline for the heart rate you see on the monitor. If the heart rate remains under 60 beats per minute, obtain vascular access, typically by insertion of an umbilical vein catheter, and administer intravenous epinephrine at a dose of 0.01 to 0.03 milligrams per kilogram.

Resuscitation efforts may be discontinued after 10 minutes of effective resuscitation including intubation and the use of epinephrine, if during this time, there was no heartbeat or respiratory effort.

If resuscitation was successful, intravenous glucose infusion should be started soon after to avoid hypoglycemia and then the newborn can proceed to the next step.

Alternatively, if upon further assessment, individuals present labored breathing or persistent cyanosis and a heart rate above 100 beats per minute, the airway has to be positioned correctly and cleared; the oxygen saturation must be observed using pulse oximetry, and supplemental oxygen must be provided until the target for the age is met. These infants can then proceed to the next step.

Now, let’s briefly talk about some of the more common causes of respiratory distress in newborns. Respiratory distress usually presents as tachypnea - or a respiratory rate greater than 60 breaths per minute; nasal flaring, grunting - which is prolonged expiration against a closed glottis; chest retraction - either suprasternal, intercostal or subcostal; and cyanosis if hypoxia is severe.

So first, transient tachypnea of the newborn is by far the most common cause of respiratory distress in term infants. It is a parenchymal lung disorder characterized by pulmonary edema resulting from delayed resorption and clearance of fetal alveolar fluid.

Characteristically, the onset is at birth or within the first 2 hours of life and it lasts for 12 to 24 hours, but signs may persist as long as 72 hours in severe cases.

Now, because it is a benign, self-limited condition, management is supportive. This consists mostly of supplemental oxygen administration by hood or nasal cannula to maintain oxygen saturation above 90 percent. Severe cases might require fluid restriction.

And second, respiratory distress syndrome is caused by a deficiency of surfactant, the phospholipid mixture that reduces alveolar surface tension to keep the alveoli inflated and maintains alveolar stability.

So a deficiency in surfactant prevents the infant from generating the increased inspiratory pressure needed to inflate alveolar units, resulting in the development of progressive and diffuse atelectasis.

Diagnosis is based on the clinical picture of a preterm infant with the onset of progressive respiratory failure shortly after birth, in conjunction with a characteristic chest radiograph.

Respiratory distress syndrome also needs to be differentiated from transient tachypnea of the newborn.

Regarding treatment, antenatal corticosteroid therapy should be administered to all pregnant individuals at 23 to 34 weeks gestation who are at increased risk of preterm delivery to prevent or decrease the severity of neonatal respiratory distress syndrome.

In newborns without respiratory failure, nasal continuous positive airway pressure is the preferred initial intervention. If this fails and apnea develops, the infant requires endotracheal intubation and intratracheal surfactant therapy with poractant alfa, calfactant, or beractan.

Now, part four starts one minute after birth or after resuscitation has ended. It is when the Apgar score is calculated at 1 and 5 minutes after birth. It is performed to determine quickly whether or not a newborn needs immediate medical care and not to guide resuscitation, although it might be a useful measure of the newborn's overall status and response to resuscitation.

The Apgar score is composed of five parameters and each parameter is assigned a value of 0, 1, or 2 for a total of 10 possible points.

Ok so A is for appearance or the skin color of the newborn. If the skin is entirely blue or pale, the score is 0; if it’s blue only at extremities but the rest of the body is pink, the score is 1; and if no sign of cyanosis is present, the score is 2.

G is for grimace, meaning the baby is pinched to see if there’s any reaction. If there’s no response to stimulation, the score is 0; if there’s a grimace on suction or aggressive stimulation, it is 1; and if the newborn cries on stimulation, 2 points are awarded.

The other A stands for activity, meaning the baby’s muscle tone must be assessed. If there’s no movement, the score is 0; if there's minimal flexion of the arms and legs, 1 point is given; and if the flexed arms and legs resist extension, the score is 2.