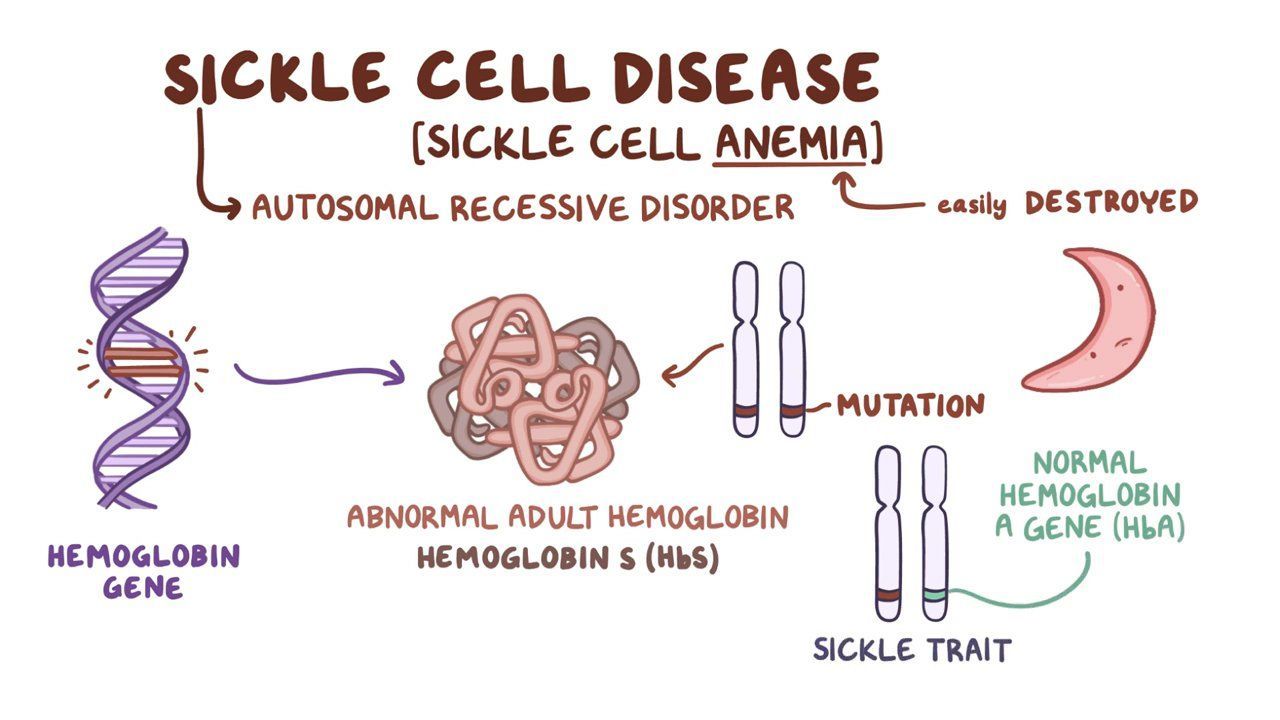 A 25-year-old African-American man with a history of sickle cell disease presents to the emergency department with a painful erection that began 28 hours ago. Examination shows that the corpus cavernosa is rigid and tender to palpation, but the glans penis is soft. Cavernous blood gasses show the following:  What of the following is the most appropriate first-step in treatment?

In sickle cell disease, also called sickle cell anemia, red blood cells take the shape of a crescent, or sickle, and that makes it easier for them to be destroyed, causing anemia.

Sickle cell disease is an autosomal recessive disorder caused by a mutated hemoglobin gene that encodes for an abnormal adult hemoglobin called hemoglobin S for sickle, or HbS for short.

A mutation in both copies of the gene is needed to get the disease. If the person has just one copy of the mutation and one normal hemoglobin A gene, or HbA for short, then they have sickle trait and they’re said to be a sickle cell carrier.

Having sickle trait typically doesn’t cause health problems unless a person is exposed to extreme conditions like high altitude or dehydration, where some sickle cell disease-like symptoms begin to crop up.

Now in individuals with sickle cell disease, when there’s acidosis, hypoxia, or dehydration, HbS changes its shape, and aggregates with other HbS proteins to form long chains that distort the red blood cell into a crescent shape, that looks like a sickle - which is the name of a blade used to cut grain.

Hemolysis can be intravascular- meaning red blood cells are prematurely destroyed within the vasculature, or extravascular, meaning that they get engulfed by macrophages in the spleen and liver. These two processes are independent from each other, but usually, both are happening to some degree.

So, in intravascular hemolysis, hemoglobin and the enzyme lactate dehydrogenase, or LDH, spill out directly into the plasma. The hemoglobin gets bound by a protein called haptoglobin and gets recycled into unconjugated bilirubin.

In extravascular hemolysis, red blood cells are destroyed by macrophages, so the hemoglobin and LDH are kept within the cytoplasm of the macrophage. Over time, the excess unconjugated bilirubin leads to scleral icterus, jaundice, and bilirubin gallstones.

At the same time, hemolysis leads to anemia. And in response, the bone marrow revs up and makes more reticulocytes.

The increased metabolism in the bone marrow causes the medullary cavities of the skull to expand, which causes enlarged cheeks and a ‘hair-on-end’ appearance on skull X-ray.

Extramedullary hematopoiesis—which is red blood cell production outside of the bone marrow—can also happen, most often in the liver, resulting in hepatomegaly.

Now, vaso-occlusion is where red blood cells get stuck in capillaries, and that leads to tissue ischemia and pain. Often times it’s an emergency, called sickle cell crisis or vaso-occlusive crisis.

In these episodes, the pain starts suddenly, can last from hours to days, and is excruciating. Any part of the body can get affected, but typically affects the same parts of the body over and over, and the severity can vary from one crisis to the next.

It can also affect the cerebral vasculature, causing a stroke, mental status changes, and Moyamoya disease, named for the “puff-of-smoke” that you see on radiographs from the collateral blood vessels that develop over time to bypass blocked arteries.

If it happens in the kidneys, it can lead to necrosis and cause hematuria or proteinuria.

If the vaso-occlusive crisis happens in the lungs, it can lead to acute chest syndrome- so chest pain, shortness of breath or cough. And since the person isn’t breathing efficiently, oxygen levels sink even lower, precipitating even more sickling - a dangerous cycle.

Finally, red blood cells can also clog up the spleen, which can lead to a splenic infarct.

So, instead of occluding blood vessels, red blood cells can also get trapped inside the spleen, along with a large portion of the circulating blood volume, causing it to massively enlarge, which is known as splenic sequestration.

The trigger for this happening is unclear, but when it happens, it’s a life-threatening complication. There’s usually a rapid drop in hemoglobin, leading to hypovolemic shock over a few hours.

Over time, these acute problems can lead to chronic complications, like growth and developmental delay, learning and behavior issues, pulmonary hypertension, chronic kidney disease and auto-splenectomy, where the spleen scars down and fibroses down to as little as 1 cm in diameter.

Not having a functional spleen makes a person susceptible to encapsulated bacteria, like Streptococcus pneumoniae, Haemophilus influenzae, Neisseria meningitidis, and Salmonella species.

Given these acute and long-term complications, it’s best to diagnose sickle cell disease as early as possible. One way to do that is with prenatal testing for hemoglobin gene mutations.

Usually, a sample of the fetal DNA can be obtained through either chorionic villus sampling or amniocentesis.

Chorionic villus sampling is when either a needle or a catheter is used to grab a small sample of the placenta, so that a genetic analysis can be done on fetal cells from the placenta.

Amniocentesis, on the other hand, is when a needle is placed into the amniotic fluid, to pull out free-floating fetal cells.

Chorionic villus sampling can be performed as early as weeks 10 through 14 of pregnancy, whereas, amniocentesis can only be performed after around week 15.

The flip side is that chorionic villus sampling has a lower diagnostic certainty, carries a slightly greater risk of miscarriage, and has a higher risk of limb defects, than amniocentesis.

Now, in some settings, sickle cell disease is tested for on the newborn screen using hemoglobin electrophoresis.

So, normally, hemoglobin electrophoresis in a newborn, will show an intense band of fetal hemoglobin F, or HbF for short, and another lighter band of the adult hemoglobin A, or HbA.

In contrast, in a newborn with sickle cell disease, the HbF band may usually remain the same, but the HbA band will be replaced by HbS.

And a newborn with sickle cell trait will have an HbF, as well as two separate HbS and HbA bands.