A 59-year-old woman comes to the clinic for a follow-up following a left lower limb amputation 2 weeks ago. The limb was amputated below the knee due to diabetic complications, and was replaced with a prosthetic leg. The patient complains of distressing pains coming from the amputated limb, and has also experienced odd tingling and itchy sensations. After excluding potential causes such as ischemia, infection, and neuroma, a diagnosis of phantom limb syndrome is made. Which of the following is the most appropriate first-line pharmacotherapy for this patient? 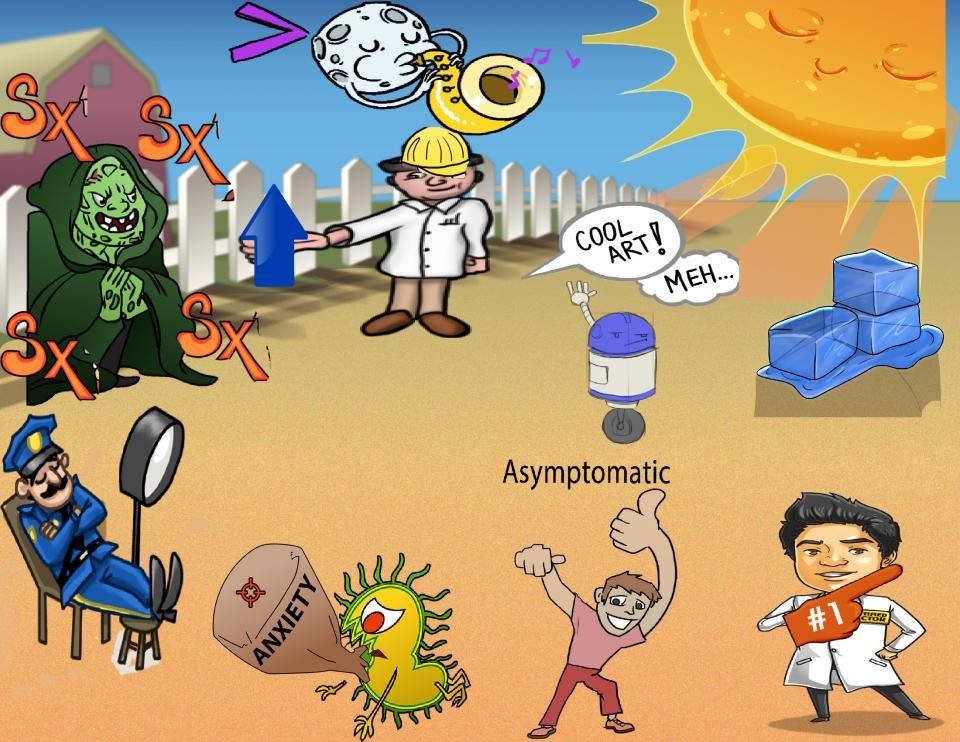 Somatic symptom disorders, formerly known as somatoform disorders, are unexplained physical symptoms that are recurrent and cause significant distress and impairment to someone’s daily life.

The exact cause of somatic symptom disorders isn't clear, but there may be biological causes like having an increased sensitivity to pain.

Some conditions may also be learned behaviors like learning that being sick attracts attention. And this can especially happen when a person develops the condition in early childhood.

Somatic symptom disorders are more commonly seen in people with a history of substance abuse, anxiety, and depression.

Somatic symptoms can be wide-ranging like pain, tingling, shortness of breath, to general fatigue and weakness.

In somatic symptom disorder, the history, physical exam, test results, and imaging are either normal or don’t explain a person's symptoms.

Often, in addition to the symptoms themselves, individuals have a lot of anxiety about the symptoms.

The complaints are recurrent and should occur for at least six months.

Finally, the symptoms should not be better explained by another mental disorder, and it should cause significant distress or impairment in all areas of functioning.

The most studied condition in this category is somatic symptom disorder.

First, individuals must have at least one somatic symptom which causes significant interference with daily life.

Second, they must have persistent and excessive thoughts, feelings, or behaviors related to the somatic symptoms as shown by at least one of the following three features: disproportionate thoughts about the seriousness of the symptoms, major anxiety about health or symptoms, and devoting excessive time and energy to them.

For example, one might feel a dull pain in the right forearm and might spend hours thinking that they have cancer.

Lastly, although the somatic symptom may not be permanent, it should appear and reappear for more than 6 months.

The first criterion is a preoccupation with having or developing a serious illness.

Third, if the individual does suffer from a medical condition or is at risk for developing one, there should be an excessive preoccupation with the condition.

Fourth, there must be a lot of anxiety regarding health, and individuals should be easily alarmed about their health.

Fifth, individuals should perform excessive health-related behaviors like repeatedly checking their body for signs of illness, or, alternatively, they avoid situations that make them confront their illness like doctor appointments and hospitals.

Next, the illness preoccupation must occur for at least 6 months, even if the illness they believe they have changed over time.

So next up is conversion disorder, also known as functional neurological symptom disorder.

First, one or more symptoms is related to voluntary movement or to the sensory function like sight and hearing.

Second, the symptom should not be due to a known medical condition. For example, one might feel weak and fatigued only when they are wearing shorts, but have no trouble when wearing pants, with no other psychological symptoms or findings.

The diagnosis requires a medical symptom or condition that is negatively affected by psychological or behavioral factors like anxiety and depressive mood, in one of the following four ways.

First, the psychological factors appear at the same time as the medical condition or appear soon after, and delay the recovery. For example, the individual might feel anxiety associated with taking medication, which might lead to poor treatment adherence.

Second, the psychological factors interfere with the treatment of the medical condition.

Third, the psychological factors must worsen the condition.

And fourth, psychological factors must influence the underlying pathophysiology, and precipitate or exacerbate symptoms. For example, if the individual suffers from obstructive lung disease, having anxiety can worsen the condition by leading to shortness of breath.