What Is It, Associated Conditions, and More

What is Beck’s triad?

Beck’s triad is a collection of three classic clinical signs associated with cardiac tamponade. The triad was originally described in 1935 by the American cardiothoracic surgeon Claude Beck and includes the presence of low blood pressure, distension of the jugular veins, and muffled or diminished heart sounds on cardiac auscultation. Although the presence of the complete triad is highly suggestive of cardiac tamponade, only a small number of cases present with all the elements of Beck’s triad at diagnosis. 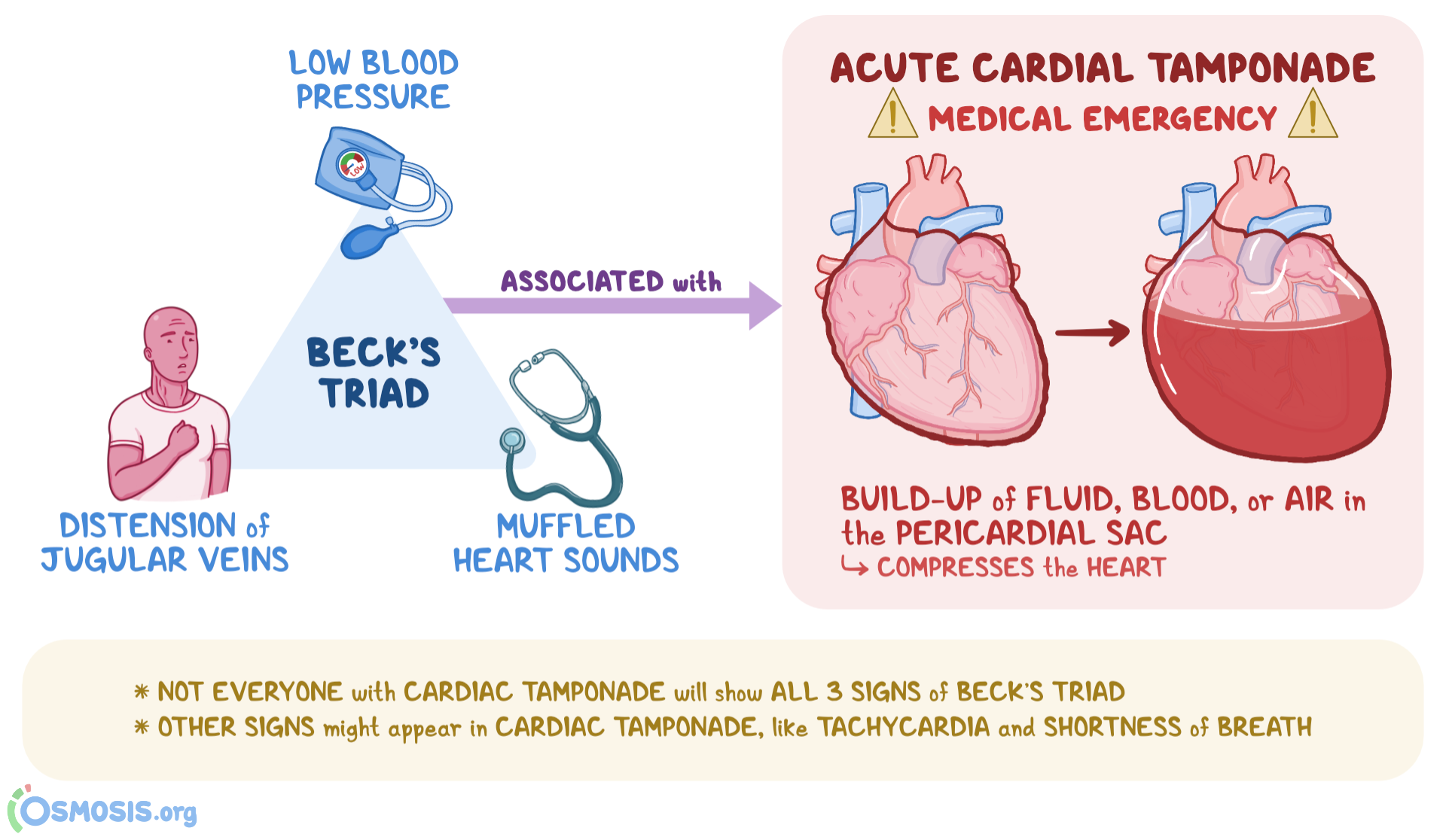 Which emergency medical condition is associated with Beck’s triad?

As the blood isn’t being pumped forward onto the systemic circulation, it can accumulate backwards, causing increased retrograde venous pressure in the veins that drain into the heart, most notably the jugular veins, which leads to jugular vein distension. At the same time, the decreased volume of blood being pumped by the heart causes a drop in blood pressure, which is typically accompanied by other signs, such as increased heart rate, shortness of breath and cold, sweaty, pale skin. Finally, excessive fluid in the pericardial sac surrounding the heart can cause dampened or muffled heart sounds upon cardiac auscultation.

Can Beck’s triad be associated with tachycardia?

Besides Beck’s triad, individuals with cardiac tamponade can present other clinical signs of decreased cardiac function: increased heart rate (tachycardia), increased respiratory rate, shortness of breath, or coughing. Another common finding is paradoxical pulse, or pulsus paradoxus, which is an abnormally large drop in systolic blood pressure of more than 10 mmHg during inspiration, whereas the normal drop of systolic blood pressure during inspiration should be less than 10 mmHg. Some individuals can also feel weakness or light-headedness due to decreased oxygen delivery to the muscles and the brain. Ultimately, if cardiac tamponade isn’t resolved, it can lead to life-threatening consequences such as circulatory shock and even cardiac arrest.

What are the most important facts to know about Beck’s triad?

Beck’s triad describes a collection of clinical signs associated with cardiac tamponade, which is a medical emergency caused by the compression of the heart due to the build-up of fluid, blood or air in the pericardial sac. The classic signs of Beck’s triad include low blood pressure, distension of the jugular veins and decreased or muffled heart sounds on cardiac auscultation. Other signs of decreased cardiac function, such as tachycardia and shortness of breath, may be present in individuals with cardiac tamponade despite not being part of the triad. Moreover, not all individuals with cardiac tamponade will present with all elements of Beck’s triad at diagnosis.