What is depersonalization disorder?

Depersonalization disorder, more specifically known as depersonalization/derealization disorder (DDD), is a psychiatric condition in which an individual feels detached from their body and thoughts, as if they were observing themselves from an outside perspective. It is a type of dissociative disorder involving problems with memory, identity, behavior, and sense of self.

While it is common to experience occasional episodes of depersonalization during one’s lifetime (e.g., daydreaming), only 2% of the population have been diagnosed with DDD. Prevalence does not seem to differ depending on gender. The symptoms typically start in early or middle childhood, with 16 years old being the average age of onset. It is rare for the disorder to begin after the age of 25. 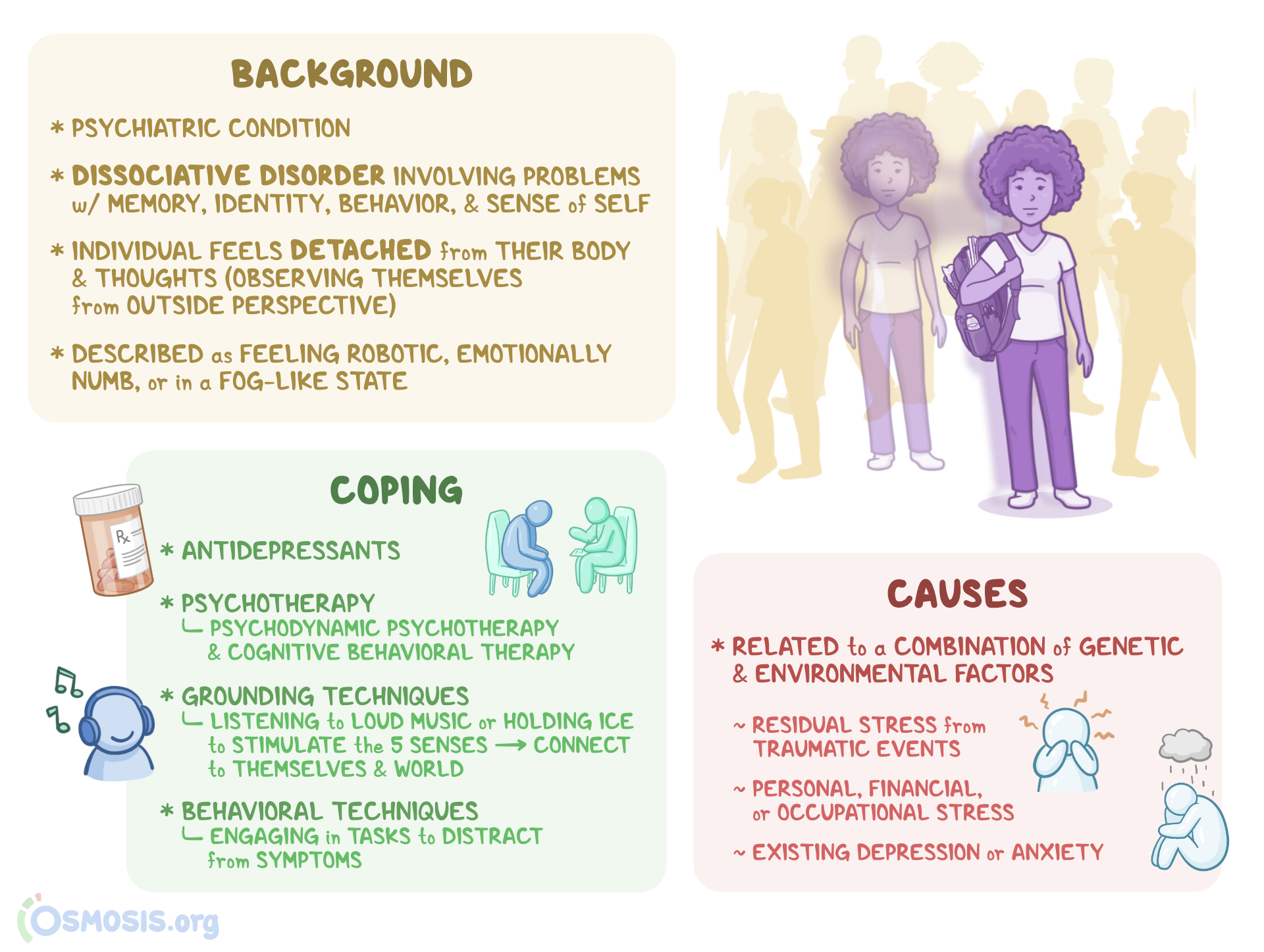 While the exact cause of DDD is not well understood, it is thought to be related to a combination of genetic and environmental factors. In some cases, it may be associated with severe residual stress from traumatic events, specifically those that occur during childhood. Examples of traumatic events include emotional or physical abuse and neglect, domestic or intimate partner violence, or the sudden death of a loved one.

Episodes of depersonalization or derealization can be triggered by personal, financial, or occupational stress, as well as from existing depression or anxiety. The possibility of diagnosis with DDD increases the more often and regularly these episodes happen.

Risk factors for development of DDD include the use of recreational drugs such as marijuana, ketamine, or hallucinogens. Episodes of depersonalization or derealization can also occur as a symptom of other physical or mental disorders, including seizure disorders, depression, and anxiety. However, a formal diagnosis of DDD can be made only if the episodes happen independently of other mental or physical disorders.

What are the symptoms of depersonalization disorder?

The symptoms of DDD usually come and go and can increase and decrease in intensity. Depersonalization involves feeling detached from one’s own body, mind, feelings, and sensations. It is often described as feeling robotic, or as if one is watching themself from an outside perspective. Individuals experiencing depersonalization may feel emotionally numb and may be unable to recognize or describe their emotions. In addition, they are often disconnected from their memories and struggle with recall.

Those who experience derealization may feel like there is a glass wall separating them from their surroundings. They may have the sensation of being in a fog-like state, with the world appearing colorless and lifeless. Sound and time can also seem distorted, so these individuals may perceive noises as louder or quieter than those nearby who hear the same noises. During episodes of derealization, time may feel as though it is passing too quickly or slowly.

Symptoms of depersonalization and derealization are distressing and are often associated with depression or anxiety. Symptoms associated with these conditions, such as feeling restless, nervous, or tense, as well as having difficulty concentrating, can also present.

How is depersonalization disorder diagnosed?

DDD is diagnosed in a clinical setting by first ruling out any other physical causes or psychiatric disorders, including seizures, use of psychoactive substances, panic attacks, major depressive disorder, or other dissociative disorders. Psychological tests and structured interviews, administered by trained clinicians, are often performed. Urine toxicology tests may also be administered to ensure that the symptoms are not due to drug use. Magnetic resonance imaging (MRI) or an electroencephalogram (EEG), a test used to detect electrical activity in the brain, may be performed to rule out other physical causes, like brain tumors.

If all other causes are ruled out, the person must meet the criteria put forth by the American Psychiatric Association’s Diagnostic and Statistical Manual of Mental Disorders, which is currently in its fifth edition (DSM-5). The DSM-5 states that the individual must have persistent or recurrent episodes of depersonalization, derealization, or both. They must also be aware that what they experience during episodes is not real (i.e., must understand that they were not physically outside their body or separated from the world by a piece of glass). Also, the symptoms must cause severe distress and impact social or occupational functioning.

Can depersonalization disorder be cured?

Currently, there is no cure for DDD, but there are various treatment options that can help manage the symptoms. Medications, such as antidepressants, can be used to treat related conditions, such as depression or anxiety.

How do you cope with depersonalization disorder?

Coping with DDD can be difficult. Psychotherapy, during which one talks to a psychiatrist, psychologist, or other mental health provider, can help individuals better manage the disorder. Psychotherapy may include psychodynamic psychotherapy and cognitive behavioral therapy, which are both techniques that address the stresses associated with the onset of the disorder. Exploring what may have predisposed the person to develop DDD may help them manage or resolve the symptoms. Cognitive techniques can be used to help block obsessive thinking about the unreal state of being. Grounding techniques, like listening to loud music or holding a piece of ice in one’s hand, stimulate one of the five senses, which can help the individual feel more connected to themself and the world around them. Those with depersonalization disorder may also be urged to use behavioral techniques, such as engaging in certain tasks, to distract themself from the symptoms.

What are the most important facts to know about depersonalization disorder?

Quiz yourself on Depersonalization Disorder 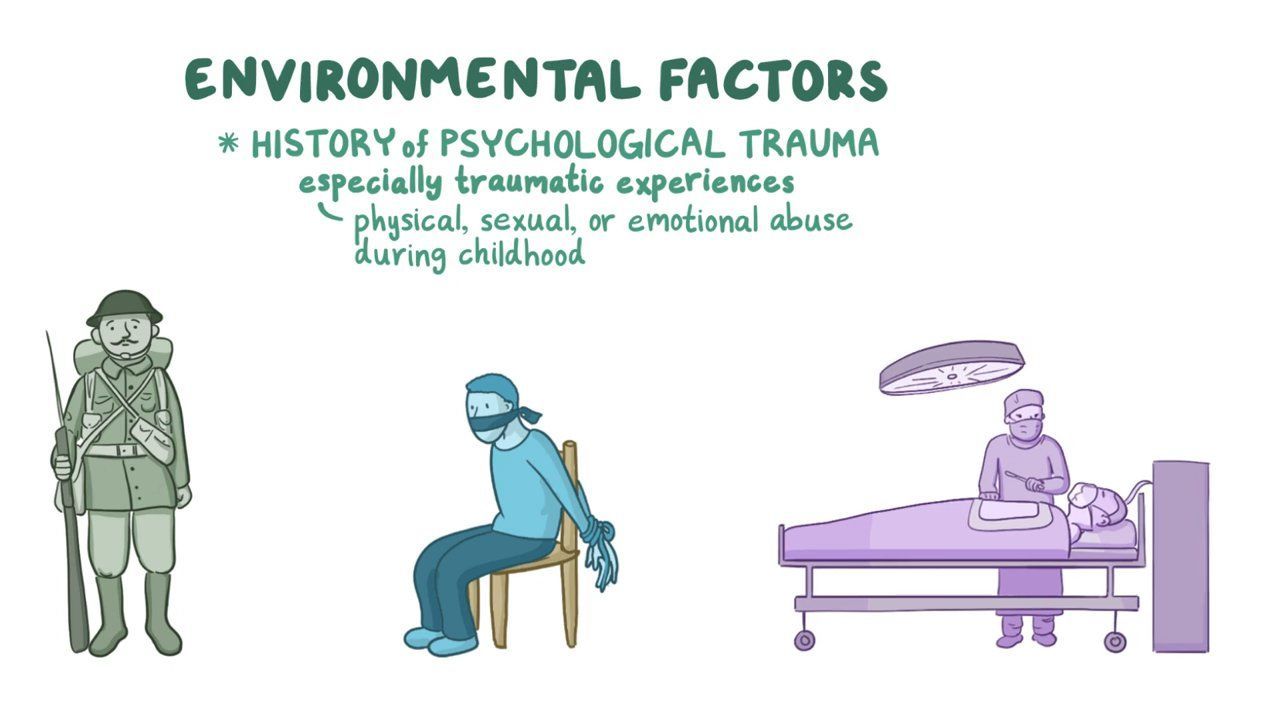 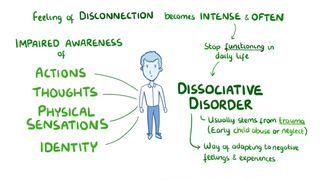 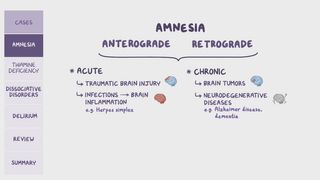 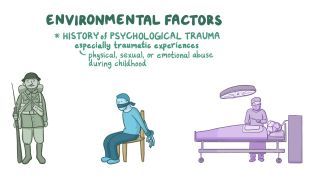