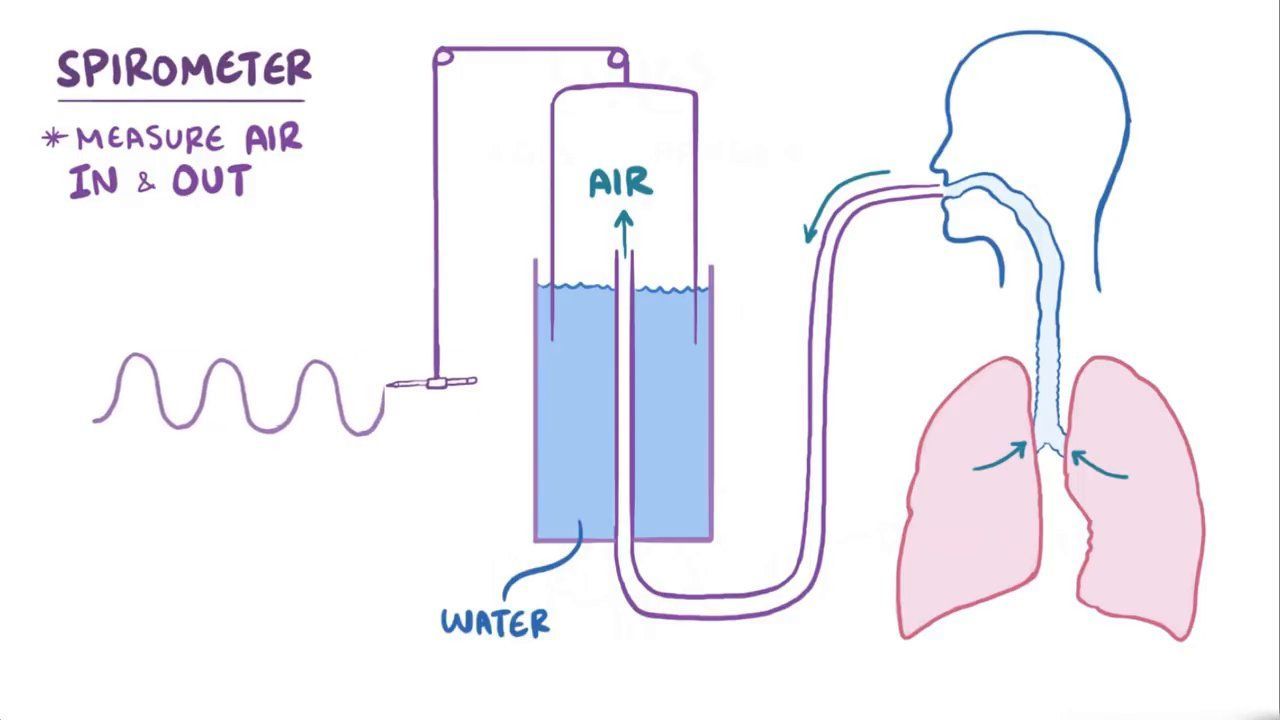 Compliance of lungs and chest wall

Pulmonary chemoreceptors and mechanoreceptors
Physiologic adaptations of the respiratory system

includes all of the lung volumes; it is the vital capacity plus the residual volume.

Normally, during an inhale - the diaphragm contracts to pull downward, and chest muscles contract to pull open the chest to suck in air like a vacuum cleaner, and then during an exhale - the muscles relax, allowing the lungs to spring back to their normal size pushing that air out.

Now, we can use a spirometer to measure the volume of air that moves in and out of the lungs with each breath using an instrument called a spirometer; the test is called spirometry.

At this point there are more sophisticated electronic spirometers, but a classic example is having an air chamber submerged in water that the person can breathe into.

So, if this is a healthy adult woman, as she breathes the spirometer makes a wave-like tracing on the paper.

The plot you end up with therefore has volume of air on the vertical axis, and the horizontal axis shows time.

During normal, quiet breathing the volume of air moving in and out with each breath is represented by the height of the wave and it’s called the tidal volume; it’s typically around 0.5 L or 500 ml.

Similarly, the expiratory reserve volume is the volume of air that she maximally exhales below the tidal volume, and it’s typically around 1.2 liters.

Now, even after she attempts to exhale all the air from the lungs, it turns out that some air still remains in the lungs and this is known as the residual volume, and it’s typically around 1.2 liters as well.

Combining the expiratory reserve volume and the residual volume together gives you the functional residual capacity, which would be about 2.4 liters.

Similarly, combining the tidal volume and the inspiratory reserve volume results gives us the inspiratory capacity which is 0.5 liters plus 3 liters or about 3.5 liters.

Going one step further and including the expiratory reserve volume as well, you get the vital capacity, at about 4.7 L, which is the volume of air that can be exhaled after a maximal inspiration - so inspiring all the way in and then exhaling all the way out.

Finally, adding the vital capacity and residual volume, you get the total lung capacity which is the total volume of air that the lungs can hold, and it adds up to 4.7 liters plus 1.2 liters - which based one what we have, is 5.9, nearly 6 L.

Now, even though we had the average residual volume of 1.2 L here using this spirometer the way it’s set up, wouldn’t actually be possible to figure out, since it’s the amount of air that a person cannot exhale even when they try. But it can be measured using something called the Helium dilution method.

To do it, a known concentration of helium is placed into the spirometer to breath in - this can be written out as “CBEFORE”, and we also know the volume of the spirometer, which is “VSPIROMETER “.

So to find the total mass of helium, M, you just multiply the concentration times the volume or (CBEFORE X VSPIROMETER), since units are mg/mL times mL, which equals mg.

Next, the person is asked to breathe in the helium mixed air.

The helium is insoluble in blood and lung tissue, so the helium stays in the lungs and within a few cycles of breathing, is redistributed equally between the spirometer and the lungs.

At that point the person is asked to exhale normally, which means that the volume of air in the lungs is the functional residual capacity. Let’s call this FRC, and then you’ve also again got the volume in the spirometer.

Neglecting the small volume in the trachea, the total volume after must therefore be the volume of the spirometer plus the FRC.

At this point, the concentration of helium in the air which has now equilibrated between the lungs and the spirometer can be called CAFTER.

So, just like in the first system, you can take concentration C-after times the new volume, Vafter, and get the total amount of helium.

Since we didn’t actually change the amount of helium in the system, Mhelium is the same as it was at the start, and so these two equations can be combined to be Cbefore times Vspirometer equals Cafter times the sum of Vspirometer and FRC.